Chuck Todd has always been a right wing shill but "created" for a left wing audience (as some are on NBC and other "left wing" channels), i.e. Chuck Todd enables right wing lies by sanitizing their extremists and giving them a fact free platform. This post consists of an example from long ago and then an example of the present of Chuck Todd & MSNBC normalizing an extremist and helping the GOP/Trump with its fake talking points on civility (a common thing in left wing - establishment - media - as well as media in general, i.e. they all con the people to various degrees);

At 6 Seconds Into The Following Video You See Chuck Todd Following Right Wing Talking Points On Who Is "The Top Tier"...

Meet the Press hosted radio host Erick Erickson to talk about civility and the need for conservatives to believe in facts. This is like asking an exhaust pipe about the virtues of clean air, or a wolf about how to keep sheep alive.
Erickson has repeatedly pushed conspiracy theories:
...
He called Trump's Muslim ban "brilliant politics." Erickson shot up a copy of The New York Times when the paper published an editorial on gun violence, and he blamed Obama for mass shootings. When Kentucky county clerk Kim Davis was briefly jailed for contempt of court for not issuing same-sex marriage licenses, Erickson warned of a civil war. In 2009, Erickson asked at what point people in Washington state might  "beat [their state representative] to a bloody pulp for being an idiot."
Needless to say, none of this came up on Meet The Press, with host Chuck Todd only offering a brief nod to “some people” who say Erickson pushes conspiracy theories. Instead, Erickson was portrayed as a reasonable conservative interested in the facts. 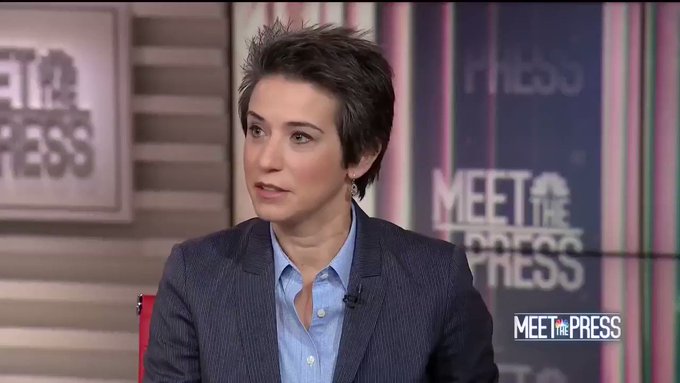 WATCH: Erick Erickson speaks to conservatives who spread conspiracy theories, now that we have facts about the bomb suspect #MTP@EWErickson: “If you’re a conservative who’s at war with the truth, you’re not really a conservative.”

Twitter Ads info and privacy
There's a real danger here: Presenting an extremist as a moderate only pushes people more toward that extremism. My colleague Parker Molloy explained that phenomenon regarding Erickson just a few weeks ago, writing about a piece in which The New York Times’ Margaret Sullivan wrote that he is seen as moderate.

The long-term effect of the constant recalibration of what constitutes a moderate position can change perception not only in media, but in politics itself. Sure, what’s moderate in 2018 -- for instance, support for marriage equality -- would have likely be considered extreme in the 1950s. Recalibrations happen over time, but usually as the result of more organic forces, not ratings. This is the Overton window in action, being shifted not by a changing landscape of political views, but by the editorial decisions involved in boosting them. That should worry us.
All of this raises the question: What role do CNN, The New York Times, and The Washington Post play in establishing and upholding the Erickson-as-moderate mythology? I asked Sullivan.
In an email, she writes, “Although Erickson may be seen by some as moderate or may actually be relatively moderate compared to someone like Alex Jones, he’s not moderate in any real sense. And whenever we refer to him, we should be a lot clearer about that than I was in my column. We owe it to our readers not to reinforce a false idea.”

Molloy and Sullivan are correct: Erickson is an extremist, and Meet The Press just gave him cover.

Todd vaguely alludes to the fact it was Erickson pushing caravan conspiracies but doesn’t outright say it, Erickson abstracts the problem to “a lot of people”—obscuring that it was he himself who said the caravan was a dem plot on 10/22. Mainstream launders rw fringe once again.

Adam H. Johnson
✔@adamjohnsonNYC
Erickson takes zero responsibility for pushing this shit, Todd doesn’t really mention it. Erickson gets to make vague condemnations of “conspiracies” w/o addressing his own wink & nod to the Alex Jones set. He’s back to being the go-to Safe NeverTrump Republican. Rinse & Repeat. pic.twitter.com/6K8kLIYnW2 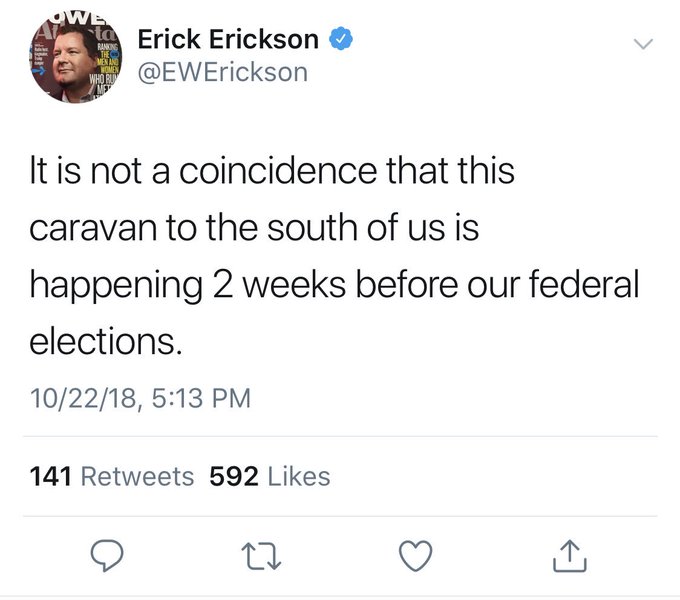 Todd has said he wants to stop conservative media from taking over and discrediting the news. He should start with his own show.


Since Chuck Todd is a "leader" of left wing "news" his influence spreads, even within its own clueless channel;

MSNBC gives extremist Erick Erickson a platform to claim he thinks "both sides need to calm down" Erickson has compared Planned Parenthood to Nazis, argued gay men should expect to be assaulted, published screeds on "liberal fascism," and called MSNBC “the Left’s Alex Jones”

KATY TUR (ANCHOR): What is first step, Erick, to calming things down?
ERICK ERICKSON (THE RESURGENT): You know, honestly, I'm not sure that it's going to be calmed down because we're a 50/50 nation right now and both sides have decided that the best way to get their people to the polls is to get them mad at the other side to drive them. As long as we don't have a unifying force in this country, and I don't know that a political leader at this point can be that unifying voice because so many Americans are getting their news and information from so many different sources. They're essentially creating their own online communities and TV communities. There's got to be some gravitating, unifying force. I'm afraid it's going to have to be an external threat. I don't say that wishing for it, I'm just afraid that's the sort of thing it's going to take at this point because the nation has become so divided.
...
TUR: Erick, in the past you've been pretty critical of the president. You've condemned him for saying certain things. Why not push him more forcefully right now to be a unifier instead of a divider?
ERICKSON: I think he needs to be, I absolutely do. I think he should lay off the American press, CNN or MSNBC or Fox News or any other news network is the enemy of the American people. And I think he does need to do that. I also think there are folks on the other side who need to tamp down on rhetoric as well. We had ricin attacks against Susan Collins and Ted Cruz last week and protesters chasing people out of restaurants. I think both sides need to calm down, which is one reason I think it's not very helpful right now is who started it. Both sides can say the other side did. What we need to come to a consensus on is that both sides need to stop turning the base over to the fringe and the angry mob and actually return to the better angels of ourselves and actually try to get things done, but I don't know that either side really wants to.

Previously:
Why is this man on my TV?
Erick Erickson compares Planned Parenthood president to a Nazi doctor
Erick Erickson: Gay men in bars should expect to be assaulted and women shouldn’t breastfeed in church
Erick Erickson applauds himself for shooting front-page editorial in The New York Times
A look back: Erick Erickson's history of inflammatory and inaccurate statements


Note: MSNBC & CNN also do this with the right wing hack Bill Krystol who was elevated during the Iraq War media coverup era giving voice to a person who is literally known as the most wrong man ever! Nowadays Bill Krystol is known as the last upholder of "morality" of a party that did 9/11, the Iraq War con, the financial con of 2008 and thier current war on the people with thier minority rule of idiots programmed by Fox News and thier followers (the right wing "media"/cultists/terrorists), i.e. a person who should never have been up there is now one of the go to persons of media, along with other right wing extremists who will follow thier talking point of "not attacking the free press" and we won't call out right wing terror. Apparently, scapegoating colored people is something all of the right and left media can agree upon.

Hey @chucktodd, here's an actual subject-matter expert who has been studying right-wing domestic terrorism for decades. You've never had him on your show. Instead you invite a parade of lying Trump surrogates. How about trying to do better? https://t.co/NbipdJk9jR
— David Roberts (@drvox) October 30, 2018