Background: Mainstream news reports the Pentagon has released a video on UFOs...

CNN Report On The UFO Videos The Pentagon Released;

Now lets take a look at some weird dodging from Neil deGrass Tyson;

Neil De Grass Tyson embarrasses himself by acting like the word unidentified means he can't see or hear anything and instead acts like he and other scientists are not scientists but mystics (its an amusing symptom of our scientific culture that they can't believe their eyes like religious people). At 2:40 in the following video you see him requiring a dinner invitation before he is willing to believe anything (including videos provided by the Pentagon classified as UFOs);


Video intro: Here you see an acclaimed scientist ignoring the scientific hypothesis and claiming that he - and other scientists - are more like mystics who live in awe, wonder and mystery and thus refuses to give a hypothesis on the Pentagon's videos or interviews of the personell involved. Its possible he's fooling himself with semantics, thinking that the word "unidentified" if used means applying intelligence to outlining a hypothesis based on current facts, as per the scientific method, no longer applies.
An example of how silly this Neil Tyson sounds;
CNN: Tyson explained that by their very nature, unidentified flying objects are, well, unidentified, (i.e. so a video recently released by the Department of Defense showing a UFO off the coast of San Diego in 2004 doesn't faze him because hes a sophisticated scientists who likes to ignore facts and live in mystery or some crap like that)
Me: Just because the word, "unidentified" is used doesn't mean you can't look at the information you have and come up with a hypothesis. Its called the sceintific method!
Tyson: "The universe brims with mysteries. Just because you don't know what it is you're looking at doesn't mean it's intelligent aliens visiting from another planet," he said.
Me: Yes, it could be bacteria from poop that has achieved the intelligence to make the leap to flight. (are you getting how dumb it sounds for a supposed scientist acting like he and other sceitists are mystics?)
Tyson: "Scientists live in mystery every day of our lives ... People are uncomfortable not knowing, not the scientists. I'm fine. We don't know what it is. Keep checking it out."
Me: Actually, scientists make hypothesis on available evidence and then investigate further. He's glorifying his profession for no reason. Maybe his fame has gotten to him. Living in so much mystery that the word "unidentified" means you can't even grasp the details of the object as revealed in the news is just silly.
Tyson: As for the intrigue surrounding why the Pentagon would be studying UFOs if there are likely no aliens steering them, Tyson said, "It's a flying object and we don't know what it is. I would hope somebody's checking it out!"
Me: Once again hiding behind the semantics of the word "unidentified'. His voice certainly suggests he believes its alien but is too scared to say so and is thus hiding behind some made up ideal of science.
This has to be one of the dumbest views or the most intellectual dishonest (or cowardly) ones. Not knowing is a preliminary to true science but when you cant even analyse raw data and come up with hypothesis - which REAL SCIENCE is founded on, not on "not knowing" - then not knowing becomes a religious mantra "scientists" chant like mystics WHICH THEY ARE NOT (why?). A drone or space craft defying aerodynamics suggests either alien life (with advanced technology from another planet) or a secret government project. If you can't say either then, in this particular case, you just sound stupid using the words of a rhetorician than a scientist to dodge OBSERVABLE phenomenon.


Yet, while he wouldn't admit the actions from the video provided from the Pentagon, when he went on Stephen Colbert's show he certainly seems to understand that to identify something as UFO or alien we need to see erratic flight behavior which the object DID show!

Neil DeGrasse Tyson: Is This Thing A Spaceship?
Astrophysicist and 'Astrophysics for People in a Hurry' author Neil deGrasse Tyson explains the science behind the first observed interstellar object to visit our universe (which Stephen knows is full of aliens).


It gets interesting from about 3:30 into the video (the rock formation analysis of the interstellar asteroid seems fine to me); 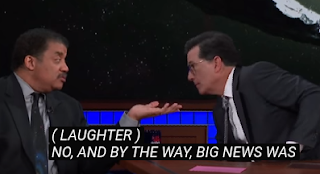 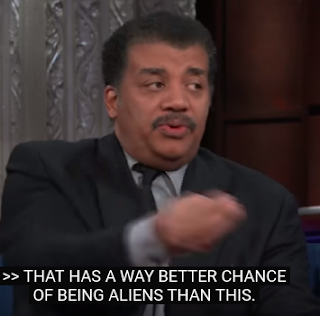 (the word here is "gravitational")

In other words, he admits to actually SEEING the UFO do stuff that defied gravity! Then he hides behind semantics again... 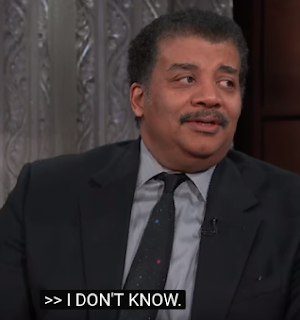 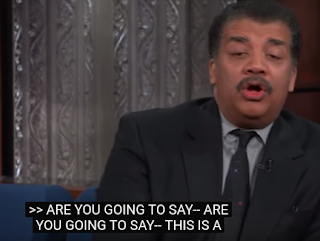 But he CAN posit a theory. Its either aliens or a hidden power or hidden city or some government messing with us. Those are LITERALLY the only possibilities right?, i.e. it HAS to be of intelligent manufacture.

Sure. You can't be sure the big bang (what he talks about) happened the way it happened. You can't be certain of reality itself, even the ancient indians call reality an illusion. BUT given that we live in a world that uses labels and science opbjects such as cell  phones and tv and laptops, we CAN know somethings. If you can identify a laptop from afar then surely you can identify something that is not made by our science or what we know of our science.

I think this is what the problem really is, Tyson is scared of aliens (see UFO fear factor). So scared he has become stupid and is using one word in an old term that no longer signifies that word as an excuse not to posit a scientific hypothesis as is normal for science. He's not thinking clearly is what I'm saying'; 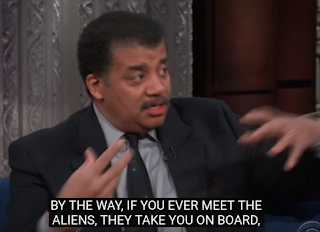 So instead of any leadership from the scientific world on this issue we have nothing. My only conclusion can be that he somehow thinks the UFO revelation ("UFO" as a symbol for alien aircraft as it is popularly conceived) could put him in danger (kidnapping fears? Is he worried that acknowledging the existence of UFOs will mean he will get kidnapped as hes a famous science guy?) or maybe the idea itself scares him, i.e. that there could be other life, so he acts like he lives in mystery, while calmly explaining aspects of astro physics which has never been seen and assuming something called "dark matter", which can't be observed, is a big part of the universe (below). Sounds like conclusions to me... (is fear making Tyson an intellectual hypocrite?)...

NEIL DEGRASSE TYSON 6/25/2008 Stephen asks Neil deGrasse Tyson what dark matter is because he doesn't see the color of matter.


At about 2:35 Tyson talks about how 85% of the gravity is the universe is attributed to something we can't see, "Dark Matter".In addition to this, Tyson claims Dark Matter exists because he can see its gravitational effects in the universe and not because it itself can be seen.

OK. So let me get this straight. Tyson can assume something he can't see (dark matter) exists by watching its effects .... while he can't draw any conclusions about something he CAN see on video by a trained military fighter pilot showing weird rotations and crazy maneuvering based on the navy aircraft displays... because ONE of the words used in describing it is "unidentified"? Well then, solving his problem is simple. Just change the popular use of UFO as "alien craft" to Ridiculously Powerful Aircraft or RPA, maybe then his highness will deign us with a scientific hypothesis even if it is "secret government program".


{Update - Sep 19, 2008 } -Using a mathematical perspective: Neil DeGrasse Tyson can assume dark matter exist by looking at math and noticing something is missing and filling that missing "substance" as dark matter. Tyson can SEE the ufo flying against a 120 knot wind and then he can SEE the 90 degree rotation of the oblong object AGAINST the wind ... thus defying aerodynamics and he hides behind the word "unidentified" and can't even offer an opinion because of the word being used??


There are only 3 options for this object given that we can see it do these things: Government secret project (either foreign government or Pentagon f*cking with us), secret hidden city on earth like Wakanda, or Aliens. There are no other choices (unless you can think of one). But using semantics to not provide even a preliminary theory (which is what scientists are supposed to do - not live in mystery but to wonder, explore, make hypothesis, test those hypothesis - Tyson is confusing his profession with that of a mystic, he should call himself a mystic if he wants to continue with those words), makes no sense.