Some extracts from research showing that Laura Ingraham's record shows she is most likely a white supremicist/nationlist/nazi.


Duke, unsurprisingly, was one of the few to endorse what Ingraham said.

Fox News host Laura Ingraham retweeted a video from a far-right British figure who is connected to David Duke.
...
Ingraham’s retweeting of a neo-Nazi comes about two weeks after her primetime Fox News colleague, Tucker Carlson, approvingly tweeted an article from a white supremacist radio show that called the Holocaust “the biggest hoax of the 20th century.” Carlson “apologize[d]” for the tweet without acknowledging he linked to a white supremacist account.


Fox News’ Laura Ingraham has drawn widespread rebuke following a racist anti-immigrant rant on the August 8 edition of her Fox show. During her far-from-subtle diatribe, Ingraham bemoaned “massive demographic changes, … changes that none of us ever voted for, and most of us don't like,” and complained, “In some parts of the country, it does seem like the America that we know and love doesn't exist anymore.” Later in the program, she questioned whether “Black-on-Black” crime is a larger issue for the Black community than the racism that infects the criminal justice system. Her comments are a nearly perfect parallel of the rhetoric used by white supremacists and were embraced and commended by former KKK leader David Duke. Outside of white supremacist circles, however, politicians, activist groups, and other media figures widely condemned the rant. 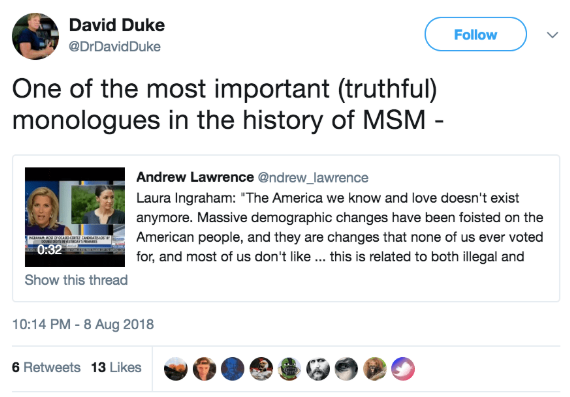 Following the criticism, Ingraham defended her comments, arguing that the goal of her monologue was “to point out that the rule of law, meaning secure borders, is something that used to bind our country together.” Ingraham’s deflection, however, is disingenuous and undermined by her history of racist commentary and anti-immigrant rhetoric. Her Fox News show, The Ingraham Angle, is less than a year old, but Ingraham has already turned it into a racist, extremist cesspool.

It isn’t difficult to find examples of Ingraham’s boundless hostility toward immigrants and her obvious apathy towards non-white communities. Here are just a few highlights from over the years (seriously, there are many more):
Ingraham has spent years demonizing and mocking immigrants.
Ingraham has demonstrated particular vitriol for Muslim people, especially immigrants and refugees.
Ingraham is routinely dismissive of any language that is not English and frequently demeans languages spoken by immigrants.
Ingraham has a history of making other racist and anti-Semitic comments, as well as disparaging organizations that serve minority communities.
Read full list here.