Trump's White Supremacist - And Anti First Amendment - Attack On The NFL's Black Players Backed By Fox News And The GOP While Simultaneously Promoting & Being Nice To White Supremacists & Neo Nazis...

Background:
1. The Charlottesville Terror Incident: Conclusive Proof That The GOP & Its Media Networks Are Really Just Nazis Re-Labeled As Something Else (Such As "Nationalists", "Conservatives" etc.)
2. NRA, Infowars, Fox News, Breitbart And Sinclair Function As A Terrorist Propaganda Wing Of The GOP That Seeks To Build Hate & Muddy The Waters (Kinda Like State TV)
3. Fox News - And Right Wing Media - Is Nothing More Than A Conspiracy & Nazi-Style Propaganda Ring
4. Outlining The Kochs Treasonous Agenda: Proofs That The Koch Brothers OWN The Right Wing & Thus The GOP Could Be Renamed "KOCH"
5. Media: How The "Left" Enables GOP Tyranny - The Southern Strategy By The GOP Created Modern Politics But They Continuously Get Away With It!

This video helps outline the sort of hypocrisy we are dealing with when we watch Fox and Friends, following Trumps lead, be nice to hate spewing Nazi and white supremacist Charlottsville protesters verses the silent noble protests of the NFL players;

Fox & Friends: Depends On The Protest - If only Fox and Friends showed the same level of disgust towards a white supremacist rally as they do for a peaceful national anthem protest.


This sort of behavior actually fits in with Fox News (and thus GOP) traditional talking points;

VIDEO: How Fox News is mainstreaming white supremacists and neo-Nazis

Fox News has been trying to normalize white supremacy for years. But since Donald Trump’s election, hosts, guests, and contributors on Fox are now openly defending white supremacists and neo-Nazis.
Everyone is well aware that Trump has been continually signaling his support to white supremacists since the 2016 presidential campaign. He retweets them, refuses to immediately disavow them, and even defendsthem. And Fox News is right there to validate him at every turn.
Fox News personalities repeat his talking points without question (and he repeats theirs). They claim that Trump has done everything he can to condemn these groups and everyone should accept it. They tell viewers to be more understanding of where neo-Nazis are coming from, but don't extend the same empathy to NFL athletes who have been peacefully protesting racial injustice by taking the knee during the pre-game national anthem. They praise Trump for not jumping to any conclusions. They make ridiculous comparisons that falsely equate white supremacists with minority groups fighting for equal rights. Fox host Tucker Carlson has even promoted a social media app that’s been called “a haven for white nationalists.”

What Trump is doing with his attacks on NFL players - protesting violence against black people by kneeling during the anthem (as per their first amendment/free-speech rights), - is using a tactic to discourage freedom of speech by heightening blind loyalty to symbols and flags (like the Nazis did) over reason and rule of law (as even GOP behavior has shown us) ... as if he/they/gop got it straight from this video about how to avoid despotism/tyranny and decided to use it for treason instead...

Despotism (1946 Encyclopedia Britannica educational film)
About despotism/tyranny/dictatorships at 30 seconds" "Well for one thing avoid the comfortable idea that the mere form of Government can of itself safeguard a nation against despotism. Germany under President Hindenburg was a republic and yet in this Republic an aggressive despotism took root and flourished under Adolph Hitler. When a competent observer looks for sign of despotism he looks beyond fine words and noble phrases." (such as those exhibited by loyalty to symbols, or people, over rule of law) 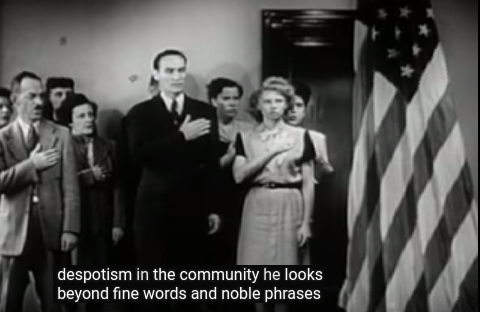 And if that rule of law (as per current despot) requires anti first amendment behavior, then we are entering a despotism (slavery is endorsed in the Bible, both Old & New Testaments, whcih is why there is a separation of church and state)...

The more we change, some things remain the same.
The N.F.L. Kneels to Trump
#MorningJoe pic.twitter.com/LumoLb8qtq
— Luke (@JDLuckenbach) May 24, 2018

The whole flag debate is anti-free speech at its heart trending towards a "shariah law". [Here, as per right wing religious propensity (even reflected in thier, ridiculously hypocritical, abstinence based policies), "the flag"takes on "sacred" religious significance which goes beyond the symbol of Constitutional law and order it was meant to represent];


TBT to the First Amendment. pic.twitter.com/WIV6KPfQom
— The Daily Show (@TheDailyShow) May 23, 2018


For example: Mike Pence shows he is an anti-Constitutionalist (he prefers ritualistic devotion to free speech and thus is unAmerican at heart... at least as far as the Constitution is concerned)...


Of course #MikePence is happy about the NFL decision to limit free speech. He is an un-American fascist.#TheResistance #MAGA #Trump #FoxNews #Resist #ImpeachTrump pic.twitter.com/K93z2wRE6h
— Fredon Moniteau (@FMoniteau) May 23, 2018

Mike Pence celebrated the NFL's announcement today that all players who are on the field when the national anthem plays must stand, or face fines. Not so fast, Mike.


The ridiculousness of this debate as outlined by a person on twitter;


Don't disrespect the flag on  #MemorialDay or any other day.
(There is nothing about kneeling during the anthem in the code)#TheResistance #MAGA #Trump #FoxNews #Resist #ImpeachTrump pic.twitter.com/PYjNZrMVAy
— Fredon Moniteau (@FMoniteau) May 28, 2018

A new NFL policy bans players from kneeling on the field during the national anthem as a method of protest. Stephanie Ruhle and her panel discuss the reaction to the new rule from teams and the president.


Black people kneel to protest excessive violence against minorities & America's Nazi President gets angry at the black athletes for not standing for an the anthem (Dictatorial approach), ignores their complaint and attacks them with the Presidential bully pulpit. #CNN #Trump #NBC https://t.co/zoo7sp3zxr
— Deadpool Abe (@DeadPoolLiberty) May 24, 2018

FACTS: If only #FoxandFriends showed the same level of disgust towards a white supremacist rally as they do for a national anthem protest https://t.co/okMgC028ex #TheResistance #CNN #MSNBC
— Deadpool Abe (@DeadPoolLiberty) May 24, 2018

Trump's demagoguery isn’t spontaneous, it is scripted, calculated and rehearsed. Reports that the President plans his worst lines. Joy Reid is joined by Jennifer Rubin and Maria Teresa Kumar.