Background:
1. GOP & Fox News Are Basically Terrorist Organizations (Based On Rhetoric & Effects Of That Rhetoric)
2. More Proofs that Brown People (Especially Brown Muslims) Are The WW 2 Jews Of Modern Day America
3. NRA, Infowars, Fox News, Breitbart And Sinclair Function As A Terrorist Propaganda Wing Of The GOP That Seeks To Build Hate & Muddy The Waters (Kinda Like State TV)

Alt-Right terrorism has become a mainstay in our society and is increasing (with Trump being the ultimate fruition of years of GOP policy and rhetoric). Samantha Bee does a good summary of the situation at the moment...


Screenshots of the summary; 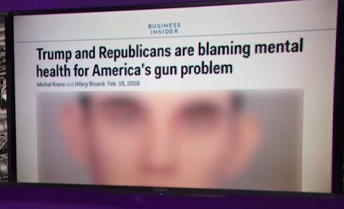 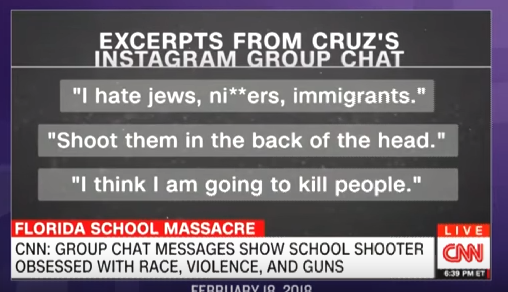 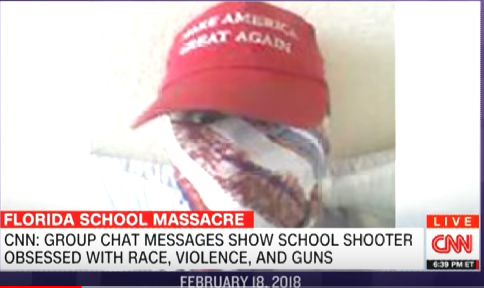 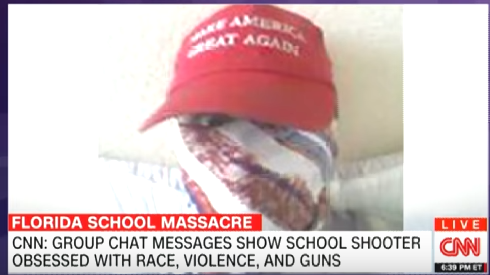 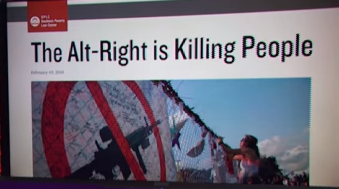 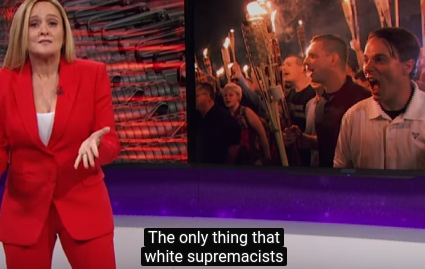 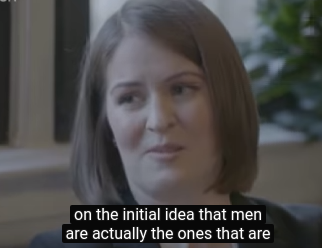 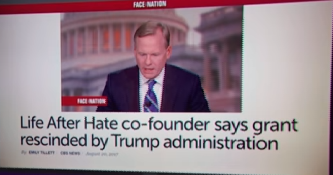 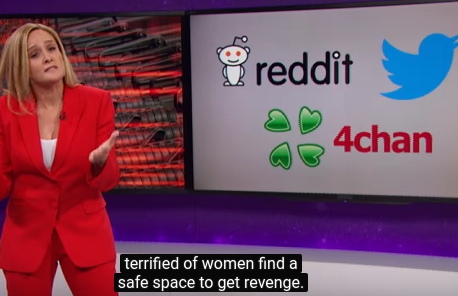 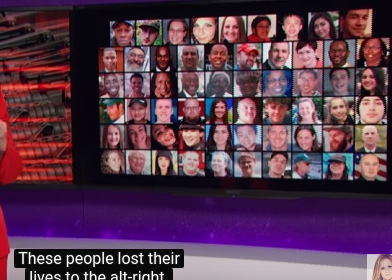 Fox & Friends' Brian Kilmeade Inadvertently Acknowledges That Fox Only Covers Terrorism When It Appears To Involve Muslims Kilmeade Says "The Last 5,000 Terror Attacks" That Fox Has Covered Have Begun With "An Arabic Phrase." Meanwhile The Network Has A History Of Ignoring Right-Wing Homegrown US Terrorism

A perfect example of a lie to cover a person obviously influenced by thier rhetoric...

Fox's Steve Doocy: It's Extraordinary That Charleston Church Shooting Is Being Called A Hate Crime

Linking Fox News With The Rest Of Cable News: Why Is No One In Corporate Media Calling Dylan Roof A Right Wing Terrorist? Clearly, Only Muslims Can Be Called Terrorists. (Till Now Fox News Has Been Avoiding The Story Altogether!)

This is a normal pattern in Fox News...

Fox News was completely silent after a Christian minister pleaded guilty to plotting to attack American Muslims in New York, continuing a habit of downplaying threats to Muslims and ignoring extremist acts with no ties to Islam.
Robert Doggart, an ordained Christian minister and former Tennessee congressional candidate, was arrested and pled guilty to attempting to recruit "expert Gunners" to aid him in a plot to kill residents of Islamberg, NY, a largely Muslim community at the foot of the Catskill Mountains. RawStory reported on the details of Doggart's plan:

He met with the informant in Nashville and discussed using Molotov cocktails to firebomb buildings in the Muslim community, which was founded by African-Americans who had converted to Islam from Christianity.
Doggart told the informant during a recorded conversation that he planned to bring 500 rounds of ammunition for the M4 rifle and a pistol with three extra magazines - as well as a machete.
"If it gets down to the machete, we will cut them to shreds," he told the informant.
He said during a recorded call that the "battalion" he commanded hoped the raid on Hancock, which is also known as Islamberg, would be a "flash point" in a possible revolution.
"So sick and tired of this crap that the government is pulling that we go take a small military installation or we go burn down a Muslim church or something like that," Doggart said.

The Daily Beast pointed out that the media has remained largely silent on the story, wondering at the absence of "the Fox News panic" and noting:

It goes without saying that if Doggart had been Muslim and had planned to kill Christians in America, we would have seen wall-to-wall media coverage. Fox News would have cut into its already-daily coverage of demonizing Muslims to do a special report really demonizing Muslims.

And in fact, Fox News has made no mention of the story at all. What's more, the network does have a history of downplaying threats against Muslims while hyping any Islamic connection to terror it can find. After the Boston Marathon bombings, the network ridiculed former Attorney General Eric Holder for warning against retaliatory acts of violence, ignoring years of threats against Muslims. In 2010, Fox host Brian Kilmeade claimed that "all terrorists are Muslims."
And Fox has reacted to terror attacks committed by right-wing extremists with a yawn. After the Department of Homeland Security released a report on right-wing terror in 2015, Fox News' Eric Bolling claimed "you can't name" instances of right-wing terrorism "in the last seven years," ignoring dozens of examples.
Right-wing media have also been known to fearmonger about often-unsubstantiated Islamic terror threats. Outlets like Fox News, The Drudge Report, and The New York Post hyped an unfounded "jihadist" plotagainst Fort Jackson in South Carolina. And Sean Hannity and other conservatives promoted an unsubstantiated story of an Islamic State (ISIS) training camp on the U.S.-Mexico border around the same time Doggart was arrested.
Islamberg, the town Doggart was planning to attack, has also garnered Fox News' attention in the past -- a 2007 FoxNews.com article wondered if it was a "terror compound" and a report by Fox Business host Lou Dobbs claimed the town was home to a group engaging in "guerilla war training."

10 of the Worst Terror Attacks by Extreme Christians and Far-Right White Men Most of the terrorist activity in the U.S. in recent years has come not from Muslims, but from radical Christianists, white supremacists and far-right militia groups.

From Fox News to the Weekly Standard, neoconservatives have tried to paint terrorism as a largely or exclusively Islamic phenomenon. Their message of Islamophobia has been repeated many times since the George W. Bush era: Islam is inherently violent, Christianity is inherently peaceful, and there is no such thing as a Christian terrorist or a white male terrorist. But the facts don’t bear that out. Far-right white male radicals and extreme Christianists are every bit as capable of acts of terrorism as radical Islamists, and to pretend that such terrorists don’t exist does the public a huge disservice. Dzhokhar Anzorovich Tsarnaev and the late Tamerlan Anzorovich Tsarnaev (the Chechen brothers suspected in the Boston Marathon bombing of April 15, 2013) are both considered white and appear to have been motivated in part by radical Islam. And many terrorist attacks in the United States have been carried out by people who were neither Muslims nor dark-skinned.
When white males of the far right carry out violent attacks, neocons and Republicans typically describe them as lone-wolf extremists rather than people who are part of terrorist networks or well-organized terrorist movements. Yet many of the terrorist attacks in the United States have been carried out by people who had long histories of networking with other terrorists. In fact, most of the terrorist activity occurring in the United States in recent years has not come from Muslims, but from a combination of radical Christianists, white supremacists and far-right militia groups.
Below are 10 of the worst examples of non-Islamic terrorism that have occurred in the United States in the last 30 years.
1. Wisconsin Sikh Temple massacre, Aug. 5, 2012. The virulent, neocon-fueled Islamophobia that has plagued post-9/11 America has not only posed a threat to Muslims, it has had deadly consequences for people of other faiths, including Sikhs. Sikhs are not Muslims; the traditional Sikh attire, including their turbans, is different from traditional Sunni, Shiite or Sufi attire. But to a racist, a bearded Sikh looks like a Muslim. Only four days after 9/11, Balbir Singh Sodhi, a Sikh immigrant from India who owned a gas station in Mesa, Arizona, was murdered by Frank Silva Roque, a racist who obviously mistook him for a Muslim.
But Sodhi’s murder was not the last example of anti-Sikh violence in post-9/11 America. On Aug. 5, 2012, white supremacist Wade Michael Page used a semiautomatic weapon to murder six people during an attack on a Sikh temple in Oak Creek, Wisconsin. Page’s connection to the white supremacist movement was well-documented: he had been a member of the neo-Nazi rock bands End Empathy and Definite Hate. Attorney General Eric Holder described the attack as “an act of terrorism, an act of hatred.” It was good to see the nation’s top cop acknowledge that terrorist acts can, in fact, involve white males murdering people of color.
2. The murder of Dr. George Tiller, May 31, 2009. Imagine that a physician had been the victim of an attempted assassination by an Islamic jihadist in 1993, and received numerous death threats from al-Qaeda after that, before being murdered by an al-Qaeda member. Neocons, Fox News and the Christian Right would have had a field day. A physician was the victim of a terrorist killing that day, but neither the terrorist nor the people who inflamed the terrorist were Muslims. Dr. George Tiller, who was shot and killed by anti-abortion terrorist Scott Roeder on May 31, 2009, was a victim of Christian Right terrorism, not al-Qaeda.
Read more.

Did Fox News commentary make the Austin Bomber hide his reasons for bombing people? In any case, there is some awareness, to some extent, that thier rhetoric causes some of thier devotees to follow through on it.

Fox's Geraldo Rivera: Austin, TX "is a sanctuary city," maybe the bomber has "a beef with that"

GERALDO RIVERA: Austin, the capital, very different politically speaking than the rest of Texas, Austin for example is a sanctuary city. Maybe the guy’s got a beef about that. They style themselves as let’s stay weird, cool town.

Previously:
Far-right media immediately float conspiracy theories about Austin bombings
Fox's Brian Kilmeade on TX bombings: "The racial component of this has to be diminished somewhat"


I would like to note that CNN CAN fight back if thier own lives at at risk (so they aren't total cowards when it comes to fighting for thier own lives)....

Ana Navarro: Trump “is going to get somebody killed in the media” CNN’s Navarro: “The president of the United States is inciting violence against the free press”

Not so much for brown people...


The arguments over the years have basically demonized brown people as terrorists ...


Posts of mine that have covered this issue before: