Proofs That Trump Is Nothing But A Dictator, And Tyrant, At Heart

This post is simply meant to summarize the views of a variety of well respected experts that Trump is very much like a dictator/tyrant.


Expert on dictators: Trump on a path of despotism Degrading the rule of law? Appointing cronies, generals and his family? Brian Klaas’s new book "The Despot's Apprentice: Donald Trump's Attack on Democracy" says Trump's actions are the same as other despots around the world. Klaas joins Ari Melber. Duration: 4:14
Trump biographer: Trump deeply would like to be a dictator Tony Schwartz co-wrote "The Art of the Deal" with Donald Trump and he thinks the thought of starting World War III excites Trump. Schwartz also contributed to the new book, "The Dangerous Case of Donald Trump." He joins Joy Reid to discuss the mental stability of the President. Duration: 6:06

Daily Show Interview: TIMOTHY SNYDER - A GUIDE TO MAINTAINING DEMOCRACY IN "ON TYRANNY" Yale history professor and "On Tyranny" author Timothy Snyder weighs in on what the rise of European fascism can teach Americans about preserving democracy. 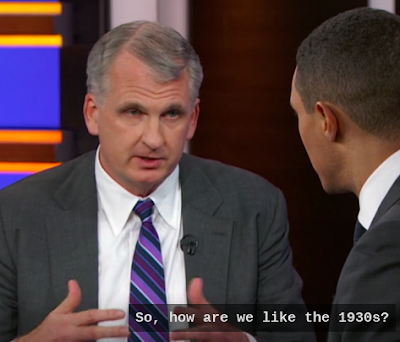 Timothy Snyder explains fascism and its sounds EXACTLY like the Trump Administration... 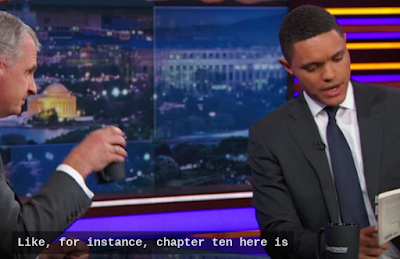 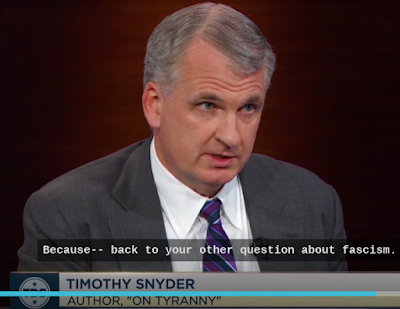 The many ways in which Trump, and the GOP, are undermining democracy and rule of law (constitutional Government)... 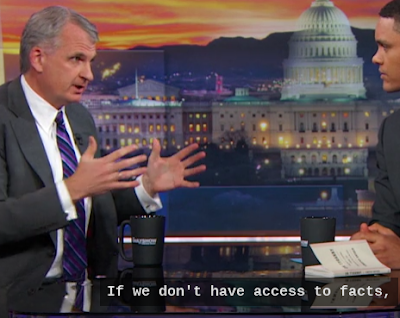 Lying ... dictators are Habitual liars and Trump liars non-stop and about almost everything ...
WaPo: Trump has made over 1500 misleading or false claims Since President Trump took office on January 20th, the Washington Post has been tracking one very specific statistic: all the President's falsehoods. Duration: 6:30

The most important element of the Nazi movement in Germany was its ability, in a modern democracy based on reason and science, to make non-facts (or "alternate facts") a part of everyday belief. 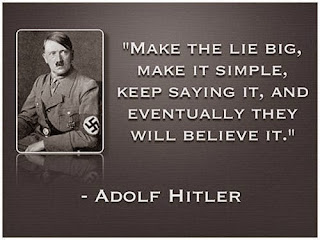 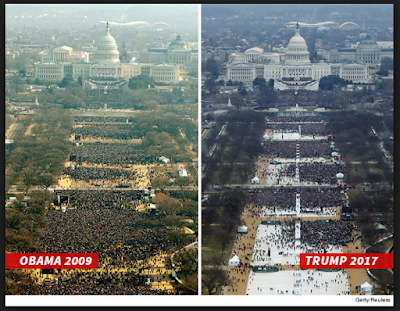 More articles explaining how Trump is an actual dictator;

DONALD TRUMP ‘WOULD PROBABLY BE A DICTATOR BY NOW’ IN ALMOST ANY OTHER COUNTRY, EXPERT SAYS

‘He Would Probably Be a Dictator by Now’ Two charter leaders of the #NeverTrump movement assess Year One.

Trump’s Dictator Chic I wrote a book about autocrats’ design tastes. The U.S. president would fit right in.

Trump Has All the Classic Markers of a Tyrant Tyranny inherits the worst features of other types of government.

Is the Trump Administration the Most Nepotistic in Modern American History? A new report reveals the president has made a handful of families enormously powerful.

Nepotism is alive and well in the White House. According to an investigation published by the Daily Beast on Monday, the members of least 20 families hold multiple positions in the Trump administration, joined either by blood or by marriage.

Kimmel: Trump threat to NBC is ‘what dictators do’

Greek Economist Yanis Varoufakis on Nazi Resurgence in Europe & Why ”ISIS Loves Donald Trump” - We speak with former Greek Finance Minister Yanis Varoufakis about the rise of the far-right Golden Dawn party in his country and how their policies “have infiltrated the mainstream” in European politics, including anti-immigrant measures similar to those proposed by Trump. Varoufakis says Trump’s vow to crack down on immigration after the attack in New York City will only inspire more attacks, noting that ”ISIS loves Donald Trump.”

The British Government Is Really This Afraid of Upsetting Trump Officials fear the president could "react badly" if the Obamas are invited to the royal wedding.

Here's How Trump Is Pitting Local Police Against the FBI Malcom Nance explains how Trump is using the 'authoritarian playbook.'

The Year of Trump Has Laid Bare the U.S. Constitution’s Serious Flaws Their inspirational vision needs an urgent update.

The first is that Trump has vividly demonstrated that much of what keeps a democracy intact is not enshrined in the written letter of a constitution, but resides instead in customs and conventions – norms – that are essential to civic wellbeing. Trump trampled all over those as a candidate – refusing to disclose his tax returns, for example – and has trampled over even more as president.
Convention dictated that he had to divest himself of private business concerns on taking office, to prevent a conflict of interest – but in the absence of a law explicitly forcing him to do so, he did no such thing. The same goes for appointing unqualified relatives to senior jobs, sacking the director of the FBI with no legitimate cause, or endorsing an accused child molester for the US Senate. No law told him he couldn’t, so he did.
I once thought the US constitution – a document crafted with almost mathematical precision, constructing a near-perfect equilibrium of checks and balances – offered protection against such perils. And there’s no denying that that text, as interpreted by the courts, has indeed acted as a partial roadblock in Trump’s path, delaying and diluting his Muslim-focused “travel ban”, for example.
But this year of Trump has also shown the extent to which the US has an unwritten constitution that – just like ours – relies on the self-restraint of the key political players, a self-restraint usually insisted upon by a free press. Yet when confronted with a leader unbound by any sense of shame – and shamelessness might just be Trump’s defining quality – America is left unexpectedly vulnerable.
Of course, there is a remedy, and its name is impeachment. Scholars are clear that Trump has already provided sufficient legal grounds for such a move – the case against him is far more compelling than the one against Bill Clinton. But impeachment proceedings are triggered by the House of Representatives, followed by a trial in the Senate, and nothing will happen so long as Republicans control both houses of Congress.
In 2017 we saw with new clarity that the strength of the US constitution depends entirely on the willingness of those charged with enforcing it to do their duty. And today’s Republicans refuse to fulfil that obligation. They, like Trump, are without shame. This was a fatal oversight by Hamilton, James Madison and their fellow framers of the constitution. They did not reckon on a partisanship so intense it would blind elected representatives to the national interest – so that they would, repeatedly, put party ahead of country. The founders did not conceive of a force like today’s Republican party, willing to indulge a president nakedly hostile to ideals Americans once held sacred.
My 1998 self asks me whether, say, the Westminster parliament would really be so different if confronted by a Trump-like would-be autocrat. Would individual MPs suppress their own revulsion and back him, fearing deselection by party activists if they did not – much as congressional Republicans won’t move against Trump lest they face the wrath of his base? It’s conceivable. And yet a parliamentary vote of no confidence is a lower hurdle than impeachment. Put simply, it would be easier to get rid of a British Trump.
And these weaknesses in the US model have prompted me to see others. The second amendment does not compel Americans to allow an unrestricted flow of guns into the hands of the violent and dangerous, but the fact that the argument hinges on interpretations of a text written more than two centuries ago is itself a problem. It means America, in the words of that great revolutionary Thomas Paine, is too often “like dead and living bodies chained together”, today’s generation shackled to the words of their ancestors.

Playing golf all the time...

Trump golfs for 2 days after saying it’s “back to work” President Trump spends one in every four days golfing on average, but the White House won't admit it. Duration: 2:43

CNN hosts a scientist to explain why Trump’s government agencies banning words is dangerous and anti-science Rush Holt: “This epidemic of neglect of evidence is really serious because if you want policies and regulations that work, they should be based on our best understanding of how things are”


This is not a highly respected person in mainstream media, but Alex Jones gets it right  on what sort of person Trump is (& proving he's not a Constitutionalist or real American in the process! What a bonus!)...

Alex Jones tries to flatter Trump by comparing him to Hitler Jones: Like Trump, "Hitler did what he said he'd do"


[BEGIN VIDEO CLIP]
MICHAEL WOLFF (AUTHOR): My credibility is being questioned by a man [Donald Trump] who has less credibility than perhaps anyone who has ever walked on earth at this point.
[...]
[END VIDEO CLIP]
ALEX JONES (HOST): And just the lies that President Trump is the most dishonest, discredited person in history, doing 95 percent of what he said he'd do. At least getting it done or trying to get it done. And then he’s -- says he's changed his mind on Afghanistan, I think that's wrong. He's not doing the stuff he said he'd do on vaccines, that's wrong. He needs to move forward and he is starting to move forward to get things cleared up for [Julian] Assange. That’s happening with the grand juries and all of it being dismissed, and so, yeah, I guess he’s starting to deliver there. OK. He's done some other stuff.
But, I mean -- who delivered on their promises like this? George Washington? Once Thomas Jefferson got in he wasn't so much as a libertarian as he was before. He was still a pretty good guy, but he flip flopped on like 80 percent, so you can't say Jefferson, even though he was a really smart guy. A lot of his writings influenced me but -- I mean, who did what they'd said they'd do like this? Abraham Lincoln was an occultist and a weirdo. Had all sorts of health problems and drank mercury seltzers every morning just so he could stop the disease he had of his bones growing over his joints and his nerves. I forget the disease, I was reading a book about it a few years ago, very interesting.
Hitler did what he said he'd do. A lot of times evil actually will do what it says, but then you have to actually -- what are the promises? Are they good and is it being followed through on? And the answer is yes. The answer is yes. Who else has been following through on their promises? Vladimir Putin. From what he does politically, very honorable. And they’ll probably have that, “Oh, see he’s a Russian agent.” No, I’m an agent of the truth. Vladimir Putin is the only other modern statesman that delivers on what he says he will do. And now it’s back in vogue because of people like Nigel Farage, and Ron Paul, and Vladimir Putin, and Donald Trump.


This is just so crazy I just don't have the words!...

Trump SuperPAC spends $1M to thank Trump for 'Merry Christmas' Donald Trump has declared victory in the "assault" on the phrase "Merry Christmas." Ari Melber looks back at the dark history of the war on Christmas and Trump's own history of self-congratulations. David Frum and Jason Johnson discuss. Duration: 10:05