Alot of misinformation about the opioid crisis out there. This post seeks to clear some of that up.


Currently everyone is talking about the opioid crisis; 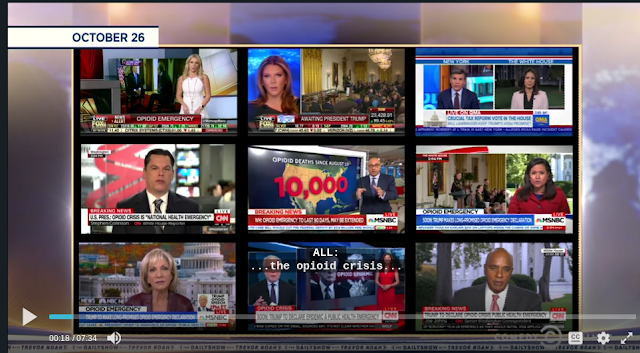 A crisis that has been essentially created by Big Pharma;
Alternet: How Big Pharma Preps You to Buy Drugs You Probably Don't Need 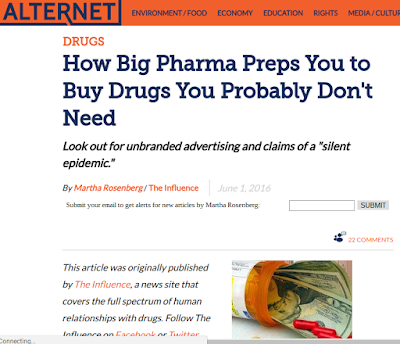 Here you see that Big Pharma is paying politicians 250 million dollars so they can pass legislation to make enforcing drug laws more difficult (strangely enough bribery is OK if you call it "lobbying" despite it accomplishing the same goals as bribery)... 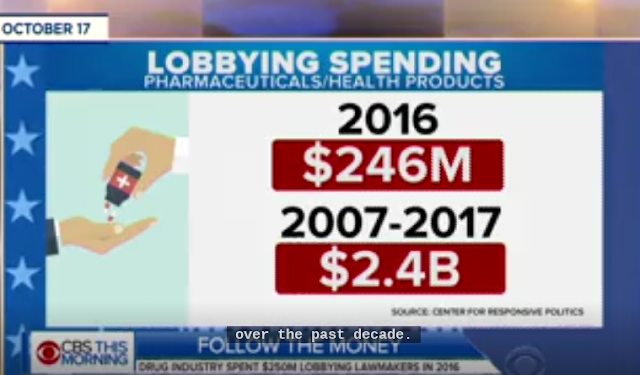 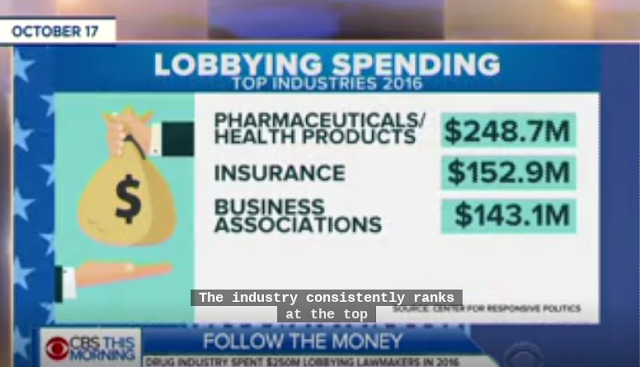 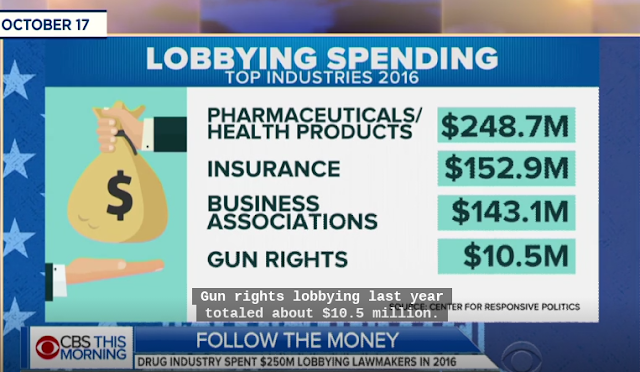 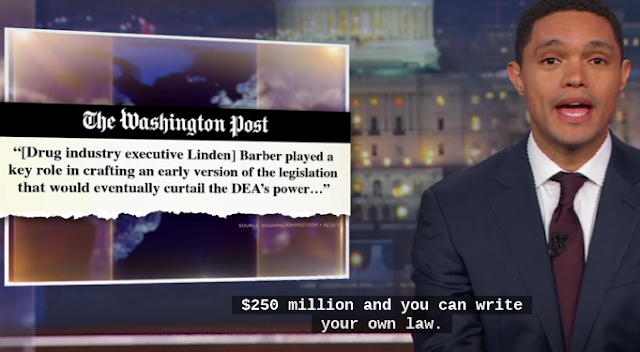 So politicians get paid to write laws for the people paying them and people wonder why things are getting worse. Plain madness.


Trump's plan releases a tiny amount of money for the opioid crisis (clearly not enough for any sort of real crisis)... 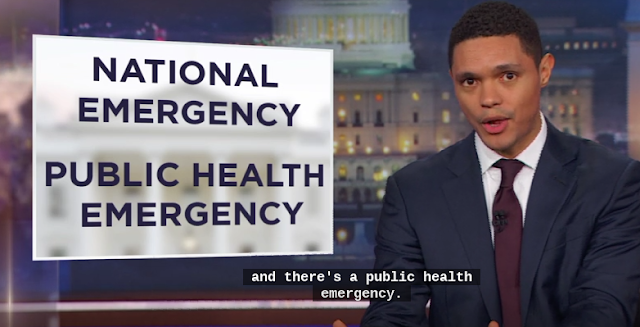 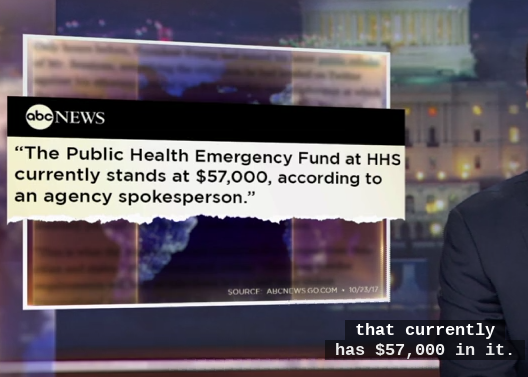 Trump seems to be using an opioid version of the abstinence argument, i.e. they are planning on telling people not to do opioids while, apparently, ignoring all its causes and problems from Big Pharma marketing them for $$$ (see article proofs below) to the culture of bribery and corruption in Washington DC that they gloss over by using innocent sounding names like "gerrymandering" (rather than election fraud) or "lobbying" (rather than bribing groups).

John Oliver discusses the extent and root of the nation’s epidemic of opioid addiction.


Alternet Article: What Big Pharma Does Not Want You to Know About the Opioid Epidemic

The prescription opioid epidemic is not new. It began when Pharma rolled out and aggressively marketed time-released opioids like Oxycontin, driving “pill mills” that distributed as many as 9 million Oxys in a six-month span. What is new is the media finally calling Pharma out on the many cagey ways it got people hooked on opioids and heroin (and continues to do so), how the FDA unabashedly helps Pharma with shocking new approvals, and how people in real pain, especially the poor and African Americans, are some of the hidden victims of the epidemic. When all the reports are in, the Pharma-driven opioid epidemic may be one of the biggest and deadliest cons in recent history.
Your Patients Won’t Get Addicted, We Promise!
When Purdue Pharma and other Pharma companies began to aggressively market opioids for even minor pain, promising practitioners they were not addictive, it had been decades since the need to tightly control narcotics had been the mandate. Many newly graduating doctors, young medical professionals and their patients did not remember the opiate addictions of the 1930s, '40s and '50s and the many U.S. troops who got hooked on heroin in Vietnam. (Certainly no one remembered the notorious opium dens of early America.) Why should these drugs be so highly restricted, said Pharma, banking on the U.S.’ short memory. Why should they be restricted to short-term surgical pain, accidents and treatment of cancer and terminal pain conditions?
The misinformation was abetted by a perverse pro-opioid movement of users who claim the real problem is the media’s “misunderstanding” of opioids and overly tight controls on the pills. (After all, you are never addicted until your source is cut off.)  Such vocal defenders are not a coincidence. They are the result of Pharma’s deliberate, multimillion-dollar campaigns to cast chronic pain and other nonmalignant pain conditions as requiring opioids and Pharma’s thriving parallel addiction business. Twenty years ago, none of the pain conditions now presented as requiring opioids would have been presented that way. Nor were between 40 and 52 people a day dying from opioids.

Alternet Article: How Big Pharma Is Making America's Opioid Crisis So Much Worse Why does a 30-day supply of the addiction treatment drug suboxone cost $500?

Alternet Article: My Grandmother Is a Drug Addict—and I Blame Big Pharma As Appalachia slowly rots from the inside, drug company execs and shareholders are making billions.

My grandmother is a drug addict.
She still refuses to admit it even though most everyone around her knows that her dependence on opioid painkillers drives nearly every part of her life. At first glance, she might look like a typical little gray-haired lady, but she lies, she cons, and she uses others in ways most of us couldn't fathom just to get the money to buy more Vicodin.
At this point, most all her family is estranged, and I am not certain she really cares. For her, the only priority is the pills. It has been this way for at least 20 years, and I’m not sure if the drug abuse made her selfish and hateful, or if she was that way before the drugs. I suspect the former. I want to believe the former. I probably need to believe the former.
As much as I would like to help her, the hard truth is that it has proven nearly impossible for any of us who are related to her to try to help her without being pulled into miserable situations ourselves. I don’t know what the answer is because I know that even as hateful and selfish as she is, she didn’t choose to be a drug addict. Circumstances beyond her control dealt her a life so terrible that she came to think of drugs as the only solution. As much as I want to be angry at her, I know in my heart that she is suffering in ways I cannot begin to understand. And frankly, I consider myself blessed, lucky, whatever you want to call it, that I cannot understand myself what she is going through.
While it might seem rare, or even a bit of a novelty, for an elderly lady to be a drug addict, it really isn’t that unusual in Appalachia. Addicts come in all ages here in the mountains. They come from rich families and from poor families. Addiction in Appalachia is not limited by race or by education level. It afflicts the Baptists and the Methodists and the Pentecostals and the agnostics. If you live in Appalachia, you almost certainly know someone who is, or was, an addict. In fact, you most likely know someone who died as a result of their addiction.
While addiction reaches both the rich and the poor in Appalachia, the stark reality is that addiction thrives in these mountains in large part because of poverty. The poverty came first. The drug addiction came later, often as a desperate response. The poor are disproportionally destroyed by addiction. They have the least access to treatment options, and they are more likely to escape addiction through death than through recovery. Most remain addicted all their lives, and their lives are usually cut tragically short.
Over the past few years, the opioid epidemic that is plaguing rural America has finally begun to get a bit of national attention. The evening news shows have run a few specials, and some documentary filmmakers have made important films about the crisis.
Today, prescription opioids have largely taken the place of heroin, methamphetamine, and crack cocaine in bringing heartache and desperation to Appalachia. These opioids don't come across the southern border or from a clandestine lab or even from a trailer park chemist. They come from multi-national corporations. They are prescribed by physicians, and purchased and dispensed, at least initially, from licensed pharmacies. The most popular form is called Oxycodone. You might know it by one of its brand names: OxyContin, Roxycodone, or Percocet. A closely-related drug, hydrocodone, is sold under brand names including Vicodin, Lorcet, and Norco. In much of Appalachia, these drugs, all of which are opioids, are household names.
Read more.