1. Tracing The Sources Of Our Culture To The Paleolithic Age... With Art & Music Being Well Over 40,000 Years Old!

2. Tracing Lost Megalithic Cultures From 9500 BC To The Present
3. Was The Egyptian Pyramid Complex Built Up Over Time? From About 10,500 BC To About 2,500 BC?
4. The Ancient Shamanic Link To Yoga, Meditation & The Other Major Religions
5. Lost Knowledge & Technology Of The Ancient World... And A Random Collection Of Inventions Showing How Inventive Humankind Is Given The Opportunity To Play At Tinkering
6. A Look At The Fall Of Civilizations (With An Emphasis On The Fall Of 1200 BC & Lost Knowledge Through Library Burnings)

While I was tracing the spread of Megalithic cultures I noted a temple in India hewn from granite straight out of a mountain from the top down, or bottom up... 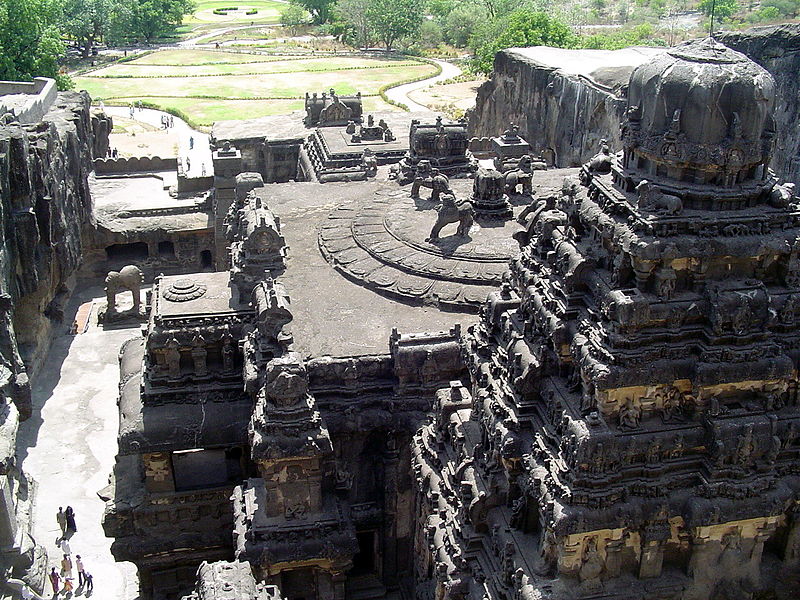 The Unusual & Mysterious Kailasha temple
The Kailasha temple is cut out of ONE solid rock making it a unique sort of Megalith & Monolith all in one. While it has inscriptions that can be dated to the 8th century the rock itself can’t be dated and so we don’t know it’s actual construction date though it can be said to be a post 1500 BC site as it has panels depicting scenes from the Ramayana and Mahabharata (Indian religious epics that are conventionally dated to about 1500 BC but could be much much older). Other anomalies about where this temple is located includes the fact that it is twice as large as the Pantheon in Greece and about 50% taller. Worse. To carve out the entire temple complex 400,000 tons of rock had to be moved which is at least a century of work (or so it would seem) and where was the rock moved to? No one knows. It simply disappeared. At least with the Sphinx the temple in front of it can be said to be made out of the rocks that were hewn out to make the Sphinx complex but here the 400,000 tons of rock is simply gone. In the Vedic literature a device is mentioned called Buamasara (if I’m getting it correctly) which could ‘cut stone and turn it into air’ (picked it up from a Vedic scholar on youtube and ahvn't been able to find the scriptural source yet).

Was there a device that could dissolve stone to dust or dissolve it at a molecular level so that it would appear like the stone had been turned into air/dust or something like that?

What interested me most was the device mentioned in ancient Vedic literature that could turn stone to air like a laser machine of some sort. This reminded me of a couple of documentaries I found where Engineers took a look at some of the rock carvings in Egypt and South America and declared it could only be done with a machine that could move at hundreds of revolutions per second with something like a diamond cutter. In other words, I found actual engineers willing to put this reputations on the line with the assertion that SOME of the structure in Egypt could ONLY have been made by a machine of some sort (like the machine mentioned in ancient Vedic literature? Could this be the technology of a lost HUMAN civilization? It certainly seems so)
ANCIENT ADVANCED TECHNOLOGY The Pyramid Mystery - FEATURE

Video description: Join David Hatcher Childress in Egypt where he meets up with British engineer Christopher Dunn. Together they explore the Giza area, going to ancient pyramid sites, underground catacombs and megalithic quarries not usually visited by tourists. Here they examine saw marks, advanced lifting and moving techniques found at the Giza Plateau, Abu Rawash, Abu Garab, and the underground catacombs of the Serapeum and other areas. Finally Dunn explains his theory of the Giza Power Plant and his view that the pyramids at Giza were originally part of a plan to "drive the earth into harmony." A mind-blowing look at solid evidence for extraordinary ancient technology.

ANCIENT ADVANCED TECHNOLOGY In Peru and Bolivia
Join Researcher David Hatcher Childress and British Engineer Christopher Dunn as they journey to Cuzco in the Andes Mountains to examine evidence for the possible use of advanced rock-machining techniques. Going to ancient cities and megalithic quarries, they again examine saw marks, advanced lifting and moving techniques, as well as evidence of Pre-Incan megalith builders

Take Away: Evidence of Machining On Rock 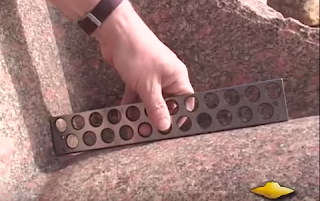 British Engineer Christopher Dunn actually found signs of machining, i.e. he says certain signs indicate a machine was used to cut some of the huge stones he found. Frankly, if an engineer says a machine was used and a primitive book nerd says no they used chisels… obviously I’m going to believe the engineer since he has the requisite technical knowledge to make such a determination.

He found such signs at the Serapeum of Saqqara in the huge “sarcophagus” (that were empty when opened) and have such perfect angles of perfectly carved stones boxes weighing 100 tons and more that they could only have been made my machine. They also found a ton of other evidence of machining on rock with power tools that two engineers agreed on. Suggesting that some culture - or cultures - in ancient times (especially in Egypt which seems to have been a large city the way New York is today) actually had tools to work with stone that is more advanced than the tools we use today. Of course, we have a different technology and it is likely that our phones and computers and other quantum and electronic technologies is unique to our particular global culture as working with stone was to the previous global culture.

In fact, in further investigations David Hatcher Childress uncovered an interesting fact that in Saqsaywaman there is a magnetic field in some of the rocks …  could magnetic technology used in temples in India have been used here to lift these huge stones and carry them up and down mountains like the tiny stones Machu Pucchu was made of?


Connecting this with the vedic description of the machine that could carve rock turning the cut part “to air” we are certainly faced with the possibility that the ancient people, who worked with stones all their lives, had developed a machine to work with stone that is more sophisticated than anything we have today… in a culture that uses steel and cement rather than stone and thus has developed a different technology than that the ancient people who built these sophisticated megalithic structures had.

Note: The fact that evidence of ancient advanced civilizations is so easy to find has started a sort of independent documentary craze as people go around the world documenting it. 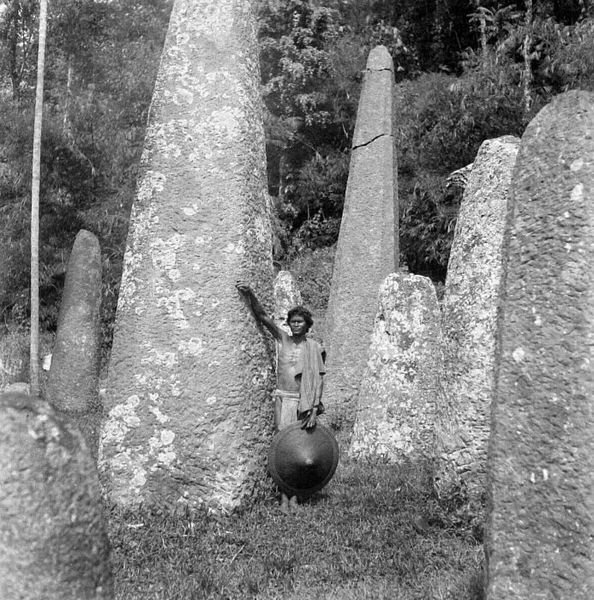 Abstract: Big stones (megaliths), some nicely decorated, were a part of the culture of Nias island off the western coast of Sumatra, Indonesia. There were big stone statues, stone seats for the chieftains and stone tables where justice was done. There were also big stones needed to commemorate of important deceased people. When such a stone was erected, a ritual feast was to be given. All this to enable a nobleman to join his godly ancestors in the afterlife. On the photo such a stone is hauled upwards. The story has it that it took 525 people three days to erect this stone in the village of Bawemataloeo. (P. Boomgaard, 2001) 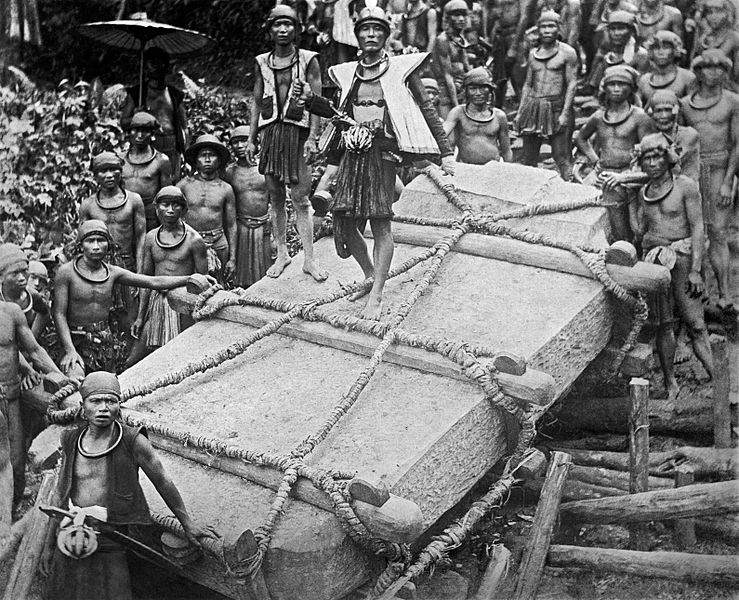 If you compare how much effort, how long it took and how many people were required to move this ONE large stone to the explanation by Egyptologists of how long and what type of effort it took to construct the pyramids to fit within the dates for the pyramids and Sphinx ascribed to them by modern textbook theories (that are pretty much dogma now like the Church in renaissance times) we are required to believe in something so astronomical in terms of engineering feats that it just boggles the mind. Here is how a professional Egyptologists describes the construction of the Great pyramid (deducing backwards from Egyptology standard theories that the Pyramid was created as a burial tomb of Khafre and was began as soon as he became Pharaoh AND was completed - appropriately - by the end of Khafre's reign, i.e. from 2558-2532 BC);
“The Great Pyramid, which originally rose 481 feet in the air, was the tallest building in the world until the Eiffel Tower finally surpassed in 4,500 years later. Resting on a base 756 feet square - large enough to contain the cathedrals of Milan, Florence and Saint Peter’s in Rome, along with Westminster Abbey and Saint Paul’s london - the 2,000,000 stones forming the mass of its structure average two and a half tons each. Since a pharaoh never began his royal tomb until taking the throne and since Khufu reigned for twenty-three years, the entire project - from initial surveying to leveling the land and piling millions of stones upon stones - must have been completed in about two decades. Meeting this schedule meant that, on the average, one two-and-a-half-ton block had to be quarried and moved into place every two minutes of every hour of every work day for those two decades. Inside, a magnificent passageway leads a third of the way up the pyramid to a granite chamber in which a polished granite sarcophagus helf Khufu’s mortal remains. Complex anti-burglary systems, such as passageways that led to dead-ends and massive stone plugs that sealed the true route to the burial site, sadly proved to no avail: the pyramid was picked clean in ancient times.”


It sounds like some child solving a math problem rather than looking at the engineering or science behind the structures they are studying... further confirming my hypothesis that Egyptology is a cult.