As I was working on a post outlining how Göbekli Tepe's carvings could easily have the same kinds of meanings as the animal figures of Native American mythology, I came across an interesting passage with a description of a headless man with an erect penis carved in one of the monuments at Göbekli Tepe and I realized I was looking at yet another example of a drawing of an ancient shaman of the type depicted in the caves of Lascaux! What an amazing discovery.

Extract from: Of animals and a headless man. Göbekli Tepe, Pillar 43

While some more reliefs to the left of the scorpion and the bird are hidden by the perimeter wall, to the right of the bird’s neck an especially interesting motif is depicted. Due to damage to the pillar it is not preserved completely, but the representation of a headless human with an erect penis is quite clearly recognizable.

Compare the Shaman of the Lascaux cave of 15000 BC, with his penis erect... 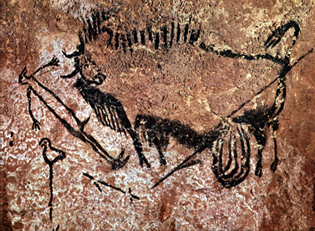 “Among the Buriat, the animal or bird that protect the shaman is called khubilgan, meaning “metamorphosis,” from the verb khubilku, “to change onesself, to take another form.”[and]... in the great paleolithic cavern of Lascaux, in southern France, there is the picture of a shaman dressed in a bird costume, lying prostrate in a trance and with the figure of a bird perched on his shaman staff beside him. The shamans of Siberia wear bird costumes to this day, and many are believed to have been conceived by their mothers from the descent of a bird. In India, a term of honor addressed to the master yogi is Paramahamsa: paramount or supreme (parama) wild gander (hamsa). In China the so-called “mountain men” or “immortals” (hsien) are pictured as feathered, like birds, or as floating through the air on soaring beasts. The German legend of Lohengrin, the swan knight, and the tales, told wherever shamanism has flourished, of the swan maiden, are like-wise evidence of the force of the image of the bird as an adequate sign of spiritual power. And shall we not think, also, of the dove that descended upon Mary, and the swan that begot Helen of Troy? In many lands the soul has been pictured as a bird, and birds commonly are spiritual messengers. Angels are but modified birds. But the bird of the shaman is one of particular character and power, endowing him with an ability to fly in trance beyond the bounds of life, and yet return.” - Joseph Campbell , Primitive Mythology, page 258


Joseph Campbell explains further: Down there a large bison bull, eviscerated by a spear that transfixed its anus and emerged through its sexual organ stands before a prostrate man. the latter, (the only crudely drawn figure, and the only human figure in the cave) is rapt in a shamanistic trance. He wears a bird mask; his phallus erect, is pointing at the pierced bull; a throwing-stick lies on the ground at his feet; and beside him stands a wand or staff, bearing on its tip the image of a bird. And then, behind this prostrate shaman, is a large rhinoceros, apparently defecating as it walks away.

There has been a good deal of discussion of this painting among the scholar, and the usual suggestion is that it may represent the scene of a hunting accident. No less an authority than Abbe Breuil himself has supported this opinion, suggesting that the rhino may have been the cause of the disaster. It seems to me certain, however, that, in a cave where pictures are magical and consequently were expected to bring to pass such situations as they represent, a scene of disaster would not have been placed in the crypt, the holy of holies. The man wears a bird mask and has birdlike instead of human hands. He is certainly a shaman, the bird costume and bird transformation being characteristic, as we have already seen, of the lore of shamanism to this day throughout Siberia and North America. - Primitive Mythology, Book 1 Of The Masks Of God

The connection between the birdman with the erect penis from the ancient paleolithic caves to Gobekli Tepe seems pretty straightforward.

Another connection?
The ‘Urfa Man’

The ‘Urfa man’ himself gives witness to the ability of early Neolithic people to sculpt the human body naturalistically. It is the oldest known statue of a man, slightly larger than life-size. In contrast to the cubic and faceless T-shaped pillars, the ‘Urfa man’ has a face, eyes originally emphasized by segments of black obsidian sunk into deep holes, and ears ; a mouth, however, is not depicted. The statue seems to be naked with the exception of a V-shaped necklace. Legs are not depicted; below the body there is only a conical plug, which allows the statue to be set into the ground. Both hands seem to grab his penis.

Now, compare to the "proto-Shiva" of the Indus Valley civilization of 3000 BC, with his penis erect...


"the yogi, as a high transformation of the shamanistic techniques and experiences of ecstasis" Joseph Cambell, Primitive Mythology, Page 437 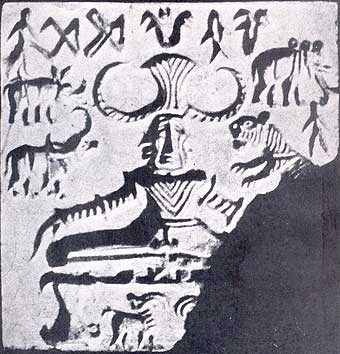 Clearly there is a direct link between the proto-Shiva of 3-4 thousand years ago (& probably older than that) to the birdman of 15000 BC. ... and the man next to the bird in Gobekli Tepe with the erect penis.

Also, notice this coffin of Osiris...

Yet another piece of evidence linking the ancient Pharaonic civilization of Egypt to shamanism as I wrote in the following post?:

Was Ancient Egyptian Culture Influenced By Shamans & Shamanism In Its Early Development Stages?

About the dismemberment and reconstitution of Osiris (the God of death and resurrection "Dionysus" in Ancient Greek times);

[Primitive Mythology -Pages 347-354] 2. In contrast to the childlike spirit of the mythology of the paleolithic hunt, a new depth of realization is achieved in the horrendous myths and rites of the planting cultures. The cultural continuum in which these are at home would appear to extend in a broad equatorial band from Sudan, eastward through East Africa and Arabia, India, Indo-China, and Oceania, to Brazil.

Death, here, is not simply the blithe passage of an immortal individual once again through a door through which is has already gone many times and back through which he will again return. A fundamental complementary is vividly recognized between not simply birth and death, but sex and murder. A mythological age is supposed to have anteceded the precipitation of this pair-of-opposites, when there was neither birth nor death but a dreamlike state of essentially timeless being. And the precipitating mythological event by which this age was terminated is renewed in the festivals, in rites such as reviewed and studied in Part Two.

The contrast with the hunting mythology could not  be greater. Yet one may ask whether the later mythology does not represent simply a deepening, an enrichment, and a systematization of ideas already inherent in the earlier. Is this "opposite" mythology, or simply a "more mature"? Are the underlying ideas so different that we cannot speak of a common psychological substratum?