Background1. Illustrated: The Conservative Media's "Echo Chamber" Designed To Increase Partisanship At The Cost Of Truth (For Profit?... Yes!)
2. The GOP-Republicans Have Rigged The Districts In Their Favor AKA Electoral Fraud AKA Gerrymandering
3. A List Of What Rupert Murdoch Owns: Fox News. Wall Street Journal, National Geographic, Fox Business, Dow Jones... (One of the primary owners of our "civil oligarchy")


This post is meant to illustrate something I've been saying for a while... that all Trump did was already normal in the GOP. John McCain ran on building a wall. Everyone (his followers) is saying "he is speaking his mind" i.e. 'he is speaking what we think'... which fits the GOP's age old strategy which this is obviously a result of.

Here is a visual and info based example of Trump being a normal GOPian and the REAL problem is clearly with the "free press";

California Rep. Darrell Issa recently released a campaign mailer touting his work on the Survivors’ Bill of Rights, which was signed into law by Obama. The mailer featured Obama with a small image of Issa, saying he was “very pleased” the president signed legislation that established a bill of rights for survivors of sexual assault.


“Here’s a guy who called my administration perhaps the most corrupt in history — despite the fact that actually we have not had a major scandal in my administration,” Obama said, according to a transcript of his remarks provided by the White House.
“And this is now a guy who, because poll numbers are bad, has sent out brochures with my picture on them touting his cooperation on issues with me,” Obama said to laughter from the crowd in La Jolla.
Issa “is not somebody who’s serious about working on problems,” the president argued. “Let me just point out that as far as I can tell, Issa’s primary contribution to the United States Congress has been to obstruct and to waste taxpayer dollars on trumped-up investigations that have led nowhere.”
Pointing out that Issa has long been a critic of the administration on everything from including birth control in health insurance coverage to the Benghazi attack in 2012, the president called the California Republican “Trump before Trump.”

I've covered this strange phenomenon of the media treating news out of context as if history and the autocratic right wing media doesn't exist...


A "Study" Of The Media's Amnesia About Itself


But now all of this is reaching epic levels where even the President is treating Trump's attitudes towards Putin like it's not the secret desire of every Republican to have Putin as thier fearless leader (short term memory loss?);


It's not like the fact that Trump is acting normal with Putin for a Republican wasn't VERY public knowledge at one time...

BIG VLADDY MARCH 6, 2014 - Dispite mounting evidence to the contrary, Vladimir Putin continues to insist that there is no Russian military presence in Crimea. (3:19)


Highlights from this Daily Kos article;

SARAH PALIN (3/3/2014): People are looking at Putin as one who wrestles bears and drills for oil.  They look at our President as one who wears mom jeans and equivocates.
CHARLES PAYNE (3/4/2014): This is a guy that wrestles tigers while the President wears mom pants!

SEAN HANNITY (3/5/2014): It's like they want Obama to seem weak to the Russian people, that they don't respect weakness. ... There you got Putin, big, strong, muscular, on a horse.

GRETA VAN SUSTEREN (1/14/2014): Did President Obama miss the class about the three equal branches of government?

RALPH PETERS (3/4/2014): My mother has a brilliant uncanny ability to meet someone, and within five minutes, she can identify their weakness.  She knows their weak point. 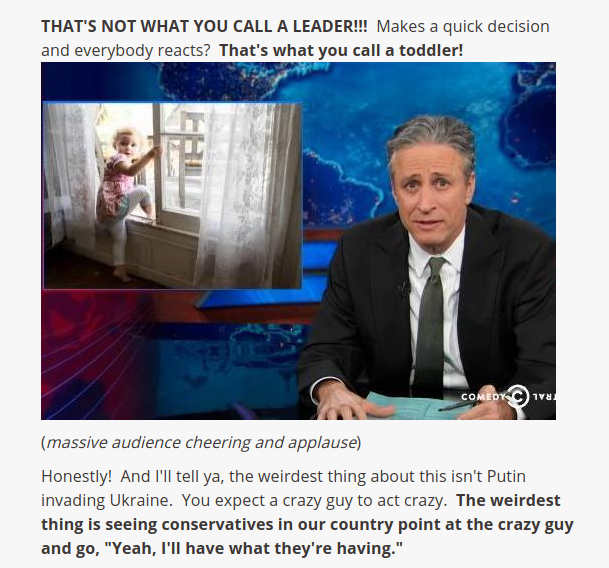 i.e. While Fox News/Conservative media/ Republicans praise the dictator Putin (who actually has dictator like powers) then call Obama a dictator (despite the political block the GOP's Congress has in place designed to destroy the economy - or cause as much damage as possible - and blame it on Obama to win elections i.e. harming America and its people for personal & political gain), media forgets this and blames Trump for following STANDARD GOP "news" rhetoric.


Moment Of Zen : Nothing Trump Did Was Abnormal For The GOP...

Putin's popularity: the envy of other politicians

Am I the Only One Who Notices the Republican Lovefest with Vladimir Putin?

On Fox, Giuliani Praises Putin: He's "What You Call A Leader," In Contrast To Obama

When the right loved Vladimir Putin Back when Putin was in the news for oppressing LGBT people, many conservatives said he had his virtues

Putin's popularity: the envy of other politicians


Overview Of The GOP-Republican Traitors With The Daily Show

Email ThisBlogThis!Share to TwitterShare to FacebookShare to Pinterest
Labels: 2016