Conspiracy Theory: Is There A Cover-up On Mars Discoveries Going On Right Now? (Very Strong Circumstantial Evidence Littered With Facts That Suggests A Coverup About History In Progress)

I like to argue that a conspiracy theory is when you have a link between two things using logic or reason (whatever form that may take) while a fact is something you can actually prove using science and evidence. I can't prove any of the following because of lack of evidence. Yet there is enough circumstantial evidence that this theory seems possible, maybe even likely, and that's what makes a good conspiracy theory.

So this post is just meant as something to think about when analyzing events related to Mars (now and into the future).


Wednesday June 25, 2008: Neil deGrasse Tyson explained at 5 minutes that the Mars Rover is only looking for conditions where life COULD exist even-though on earth there is ALWAYS life where there is water. Recently the rover sent with all it's sophisticated sensing equipment ... ALSO, didn't carry a simple test for life. At what point do we say, "OK, enough. What have you guys found that yall are not telling us about?".
Again and again, we discover "anomalies" (stuff that makes no sense). Rather than covering it up, pretending it doesn't exist, sending up one satellite after another to Mars and forgetting to add a simple scooper to test for life (even though water on Mars is now confirmed... and was ALWAYS a part of the theory of how the Martian surface came to be that way)..

So on the one hand NASA wouldn't send a scooper to analyse the soil for signs of life (past or present) and on the other hand we declare Mars had life on it 4 billion years ago without a proper geological analysis? We don't even have radio-carbon dating that can test for something that's 4 billion years old. How did NASA figure out the date when Mars was livable? Magic?

A collection of past posts of mine on the subject to illustrate this evidence supporting the basis for my conspiracy theory that there is a Mars coverup going on right now;

BBC NEWS: Nasa's Curiosity rover has found strong evidence that Mars was once habitable. Results of the most detailed analysis of the Martian atmosphere suggests that more than four billion years ago it was quite similar to Earth.

Based on a non-transparent analysis it has been decided that Mars was habitable about four billion years ago.
Now consider this piece of evidence:
The most illustrious meteorite in history continues to inspire heated debate. Does it carry microbial fossils from Mars or are its strange features just the product of some unique geochemistry? After almost 20 years, dueling papers are still coming out, and the opposing parties are no closer to a resolution.
Most scientists agree that the meteorite ALH84001 is the oldest meteorite ever found to have come from Mars.

"The meteorite is so old that if Martian life existed back then, it probably floated by the rock at some point," says Timothy Swindle of the University of Arizona. "But did it leave any record?" \
{Note: Rocks are estimated to be old by the layers of sediment/stone... there is NO way to measure how long a rock has been in space as it's like a deep freeze with no air for deterioration}
In 1996, one research group claimed yes, sending shock waves through the scientific community and beyond. President Bill Clinton made a special address on the apparent discovery, and the media widely broadcasted the scientists' images of what appeared to be dead "bug" remains from the rock. Had we finally met our neighbors?

The iconic meteorite became the grist for many imaginations. The TV show The X-files depicted an ALH84001 look-a-like with live bugs in it, and a Dan Brown novel imagined a conspiracy to cover-up extraterrestrial evidence from a space rock.
The meteorite made its debut in 1984, when it was picked up by a geologist team riding snowmobiles through the Allan Hills region of Antarctica. It took 10 years for researchers to realize this 4-pound specimen likely came from Mars.

The general consensus now is that the original rock formed 4 billion years ago on Mars. It was eventually catapulted into space by an impact and wandered the solar system for millions of years before landing on Earth 13,000 years ago. {How can anyone possibly make this assumption without evidence? How do they know that rock was floating in space for a billion years when the technology for that sort of calculation doesn't exist?}
Over 50 other meteorites have been identified as coming from Mars, but ALH84001 is by far the oldest, with the next in age being just 1.3 billion years old.
"That alone makes ALH84001 a very important sample," says Allan Treiman of the Lunar and Planetary Institute. "It's our only hope to understand what Mars was like at this time period."
The first thing that struck researchers examining the meteorite was the presence of 300-micron-wide carbonate globules that make up 1% of the rock. Dave McKay from NASA's Johnson Space Center and his colleagues determined that the carbonate most likely formed in the presence of water.
Although evidence for a wet ancient Mars has accumulated in the subsequent years, the claim that ALH84001 once sat in water was pretty revolutionary at the time, says Kathie Thomas-Keprta, also from the Johnson Space Center.

So let me get this straight. This rock jumped off of Mars and roamed around the universe for a billion years before finally landing on earth... EXACTLY WHEN ALL THE ANCIENT CIVILIZATIONS SEEM TO HAVE DISAPPEARED?

Update to the "UFO" in the Baltic;

Experts tell you to disregard the sonar scans while over 3 years have passed and we have no images. That is the most suspicious thing I ever heard. Of course I don't have any physical evidence but the circumstantial evidence DOES suggest a coverup.

Live Science admitted (cause those are the facts) that these old rocks STILL haven't been photographed (and are kind enough to put up a false illustration since there are no photos available); 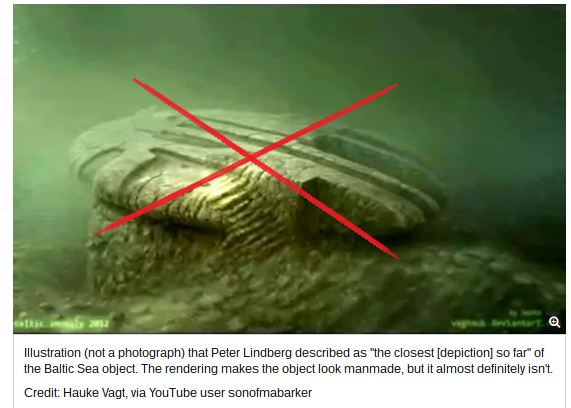 The find in that lake is SOMETHING. How do I know? Cause now they are saying a wire mesh from some hypothetical world war 2 technology has the ability to disrupt modern day electronics. The fact that this is not being framed as a rock suggests this is something more than the rock structures found commonly under our oceans. Anyways, introducing the magical wire mesh theory of why we have no closeups of the old structure found; 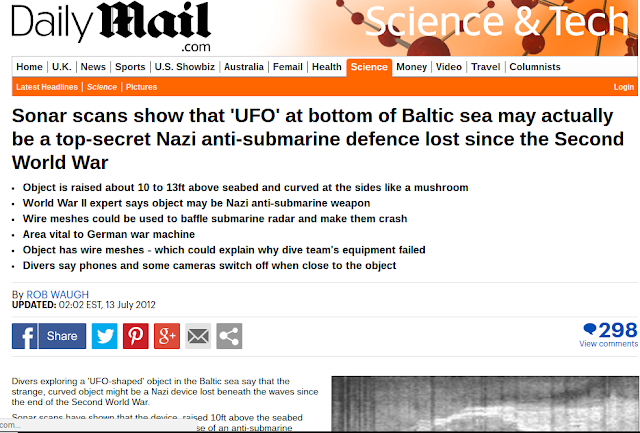 If tabloids and/or newspapers start coming up with crazy theories years after the discovery then we have yet another piece of evidence pointing to a coverup.

Here are the sonar scans (only public photographic evidence we have!);


RT reports the coordinates of the object hasn't been released (as do other magazines, which is suspicious in it's own right, especially after all this time) 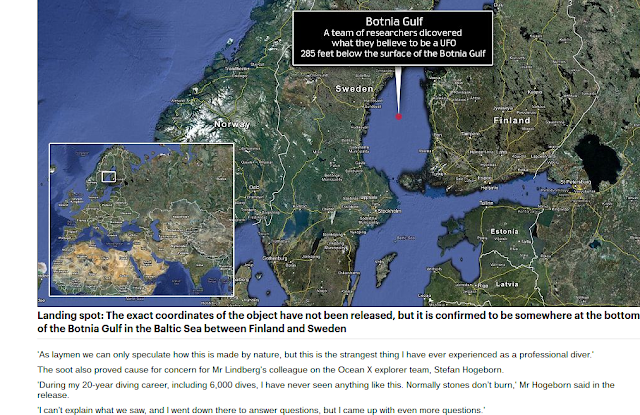 So, can we really trust ANY Mars expedition to tell us what they really find up there? The answer to that is a simple no.