What's in this post: First an outline of Trump's basic lie exposed by the Daily Show followed by a step by step illustration of WHEN Donald Trump SAID he didn't like the Iraq War (using a timeline) showing that Trump didn't oppose the Iraq War till it became POPULAR to do so because of all the bad news. 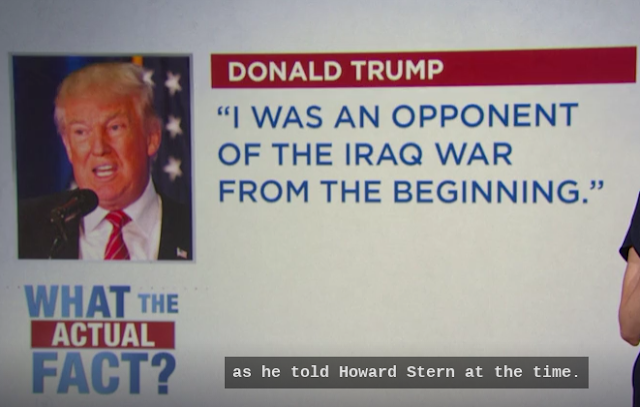 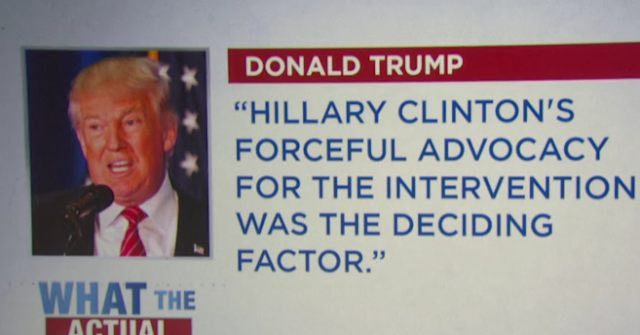 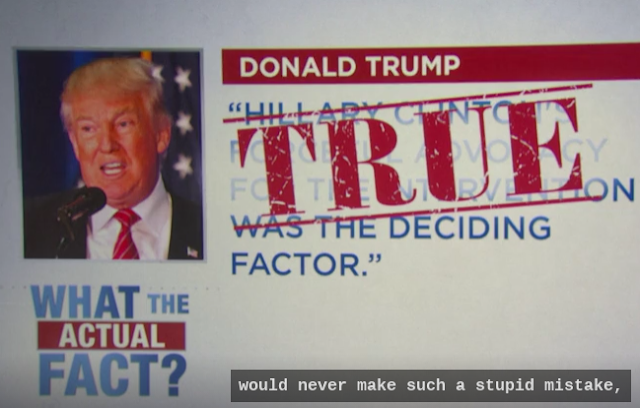 Trump made a claim that was true but left out the fact that he agreed with Hillary (he lied about the Iraq War - details below - and now this); 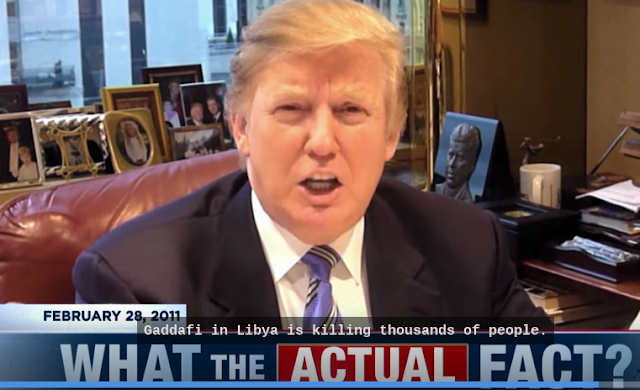 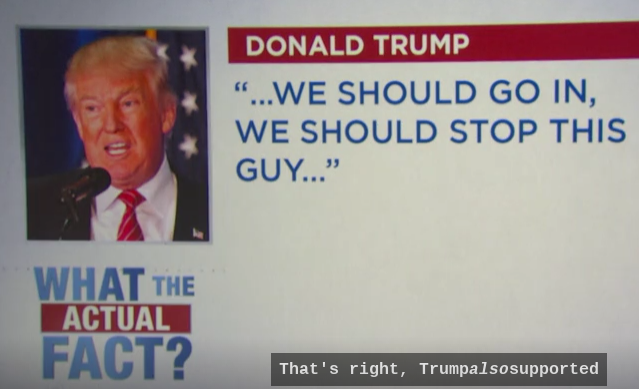 Here is an illustrative time-line showing what Trump said with an example of what was going on in the news using the Daily Show. You'll see that Trump didn't oppose the Iraq War till public opinion was beginning to turn. In other words, Trump did nothing spectacular by opposing the Iraq War when it started to look bad. (It's the same thing he does even now, i.e. see #2.);

Article: FactCheck.org: Donald Trump and the Iraq WarA timeline of Trump statements about the Iraq war, before and after it started, from September 2002 to December 2003

(Italics are quotes from the article)

Sept. 11, 2002: Howard Stern asks Trump if he supports invading Iraq. Trump answers hesitantly. “Yeah, I guess so. You know, I wish it was, I wish the first time it was done correctly.”

Clearly Trump bought the whole fear mongering campaign by the Bush Administration hook like and sinker;

WORDS OF MASS DESTRUCTION AUGUST 14, 2002 - The United States launches a powerful theoretical attack of large font sans serif characters against Iraq, some even equipped with italics. (2:34)

Jan. 28, 2003: Trump appears on Fox Business’ “Your World with Neil Cavuto,” on the night ofPresident Bush’s State of the Union address. Trump says he expects to hear “a lot of talk about Iraq and the problems,” and the economy. He urges Bush to make a decision on Iraq. “Either you attack or you don’t attack,” he says. But he offers no opinion on what Bush should do.

What is going on;

SLOWDOWN: IRAQ - PRO-WAR AGENDA JANUARY 22, 2003 - President George W. Bush is pushing for war with Iraq, but even allies such as Germany are against it. (3:35)

March 19, 2003: President George W. Bush announces in a televised address to the nation that the war with Iraq has started.


March 21, 2003: Neil Cavuto of Fox Business interviews Trump about the impact of the Iraq war on the stock market. Trump says the war “looks like a tremendous success from a military standpoint,” and he predicts the market will “go up like a rocket” after the war. But Cavuto does not ask Trump whether the U.S. should have gone to war with Iraq and Trump doesn’t offer an opinion.

There is great optimism about the war and Trump clearly shares this common view;

March 22, 2003: The San Antonio Express-News quotes Trump as saying the “war is depressing.” The article was about the Miss USA pageant, which Trump owned at the time. The pageant was held March 24, 2003 in Alamo City.

San Antonio Express-News, March 22, 2003: While terrorist attacks and the gloomy economy have taken their toll on New York, Trump said the Big Apple housing market remains strong because of low interest rates.
And his casinos in Atlantic City still lure gamblers, he said.
Trump, a bachelor since his marriage to Marla Maples ended in 1999, said the war with Iraq hasn’t shaken his city.
“New York is one of the safest cities in the United States,” Trump said.
“War is depressing, but something like the Miss USA pageant is positive and brings you out of that funk.”

March 25, 2003: The Washington Post quotes Trump, at a post-Oscars Vanity Fair party, as saying the war is “a mess.”

Washington Post, March 25, 2003: Donald Trump, with Amazonian beauty Melania Knauss at his side, pronounces on the war and the stock market: “If they keep fighting it the way they did today, they’re going to have a real problem.”
Looking as pensive as a “Nightline” talking head, the Donald concludes, “The war’s a mess,” before sweeping off into the crowd.

Trump and the paper do not elaborate on exactly what he means by “a mess.” But we do know that the Oscars were held that year on March 23, which is also when it was reportedthat a U.S. missile accidentally downed a British fighter jet. We also know that Trump’s remarks were in the context of the war’s impact on the stock market.  The Dow Jones Industrial Average increased 235 points the day after the war, but it dropped 307 points a day after the friendly fire incident.

HEADLINES - IRAQ: ARE WE THERE YET MARCH 19, 2003 - Out of respect for the troops in Iraq, the Academy Awards will replace the red carpet with a crimson bathmat. (6:46)

July 1, 2003: Trump appears on “Hardball with Chris Matthews” and expresses concern about money being spent in Iraq rather than in the U.S. He made his comment when he was asked about a quote Trump gave in February 2000 about the possibility of running for president.

Trump, July 1, 2003: I never did run [in 2000] and I probably never will run. But we’re having a lot of fun. I think the president is doing a very good job. I would love to see New York City and some of the cities and some of the states get some of the money that`s going toward Iraq and other places, because you know, they really need and it they need it badly.

As an aside, Trump, who lives in New York, was asked by Matthews who he would vote for in a hypothetical 2008 race between two New Yorkers: then-Sen. Hillary Clinton, a Democrat, or former New York City Mayor Rudy Giuliani, a Republican. Trump refused to answer. Twice Trump said, “Don’t ask me that question.”

THE PRESIDENT AFLOAT MAY 1, 2003 - President Bush lands a jet on an aircraft carrier, signaling the end of Hostilities in Iraq. (4:07)

Sept. 11, 2003: Joe Scarborough, who at the time was host of MSNBC’s “Scarborough Country,” airs interviews with New Yorkers — including Trump  — on the second anniversary of the 9/11 terrorist attacks. He asks about terrorism, the Iraq war and New York.

Trump, Sept. 11, 2003: It wasn’t a mistake to fight terrorism and fight it hard, and I guess maybe if I had to do it, I would have fought terrorism but not necessarily Iraq.

What had happened before Trump said the above? Practically everything...

FOOL BRITANNIA JULY 10, 2003 - Tony Blair takes heat for his pre-war statements about Iraqi weapons in a no holds barred bitch-fest known as the British Parliament. (2:12) 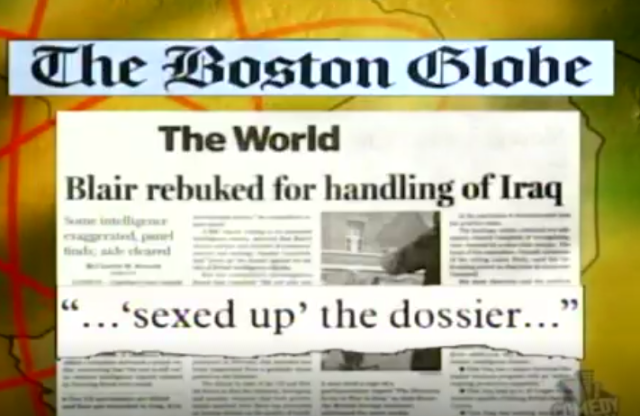 
MESS O'POTAMIA - SABOTAGE AUGUST 19, 2003 - The Iraqis are helping us un-build their country through a careful program of sabotage. (2:43)

In other words, Trump was WITH the war in Iraq for oil TILL it turned scam part of the Iraq War came out. In short, Trump was not even close to being against the Iraq War "from the beginning".

More details about the Iraq War;