Background: The Ultimate Collection Of 50 Fox News Lies Exposed By The Daily Show & Backed By Politifact

I have some comments on Rachel Maddow and Trump (based on a look at this old video) below. First I want to go over the point of this post. The weird pathetic loserville attitude the "non-conservative media" has adopted in relation to outright lies & cover-ups;

Disgraced Fox News exec Roger Ailes to help Trump:  Rachel Maddow looks back at Roger Ailes' history as a Republican strategist before he became the guiding Republican force shaping Fox News, and notes reports that he is now working with the Trump campaign.

At approx 15:20: "... he is the one that came up with the idea of fair and balanced as an intentionally ironic slogan to let the country know that they could get their all conservative all the time official Republican television on this one cable news channel while slamming all other sources of news as being unbalanced because they weren't right-wing like Fox . LOVE IT OR HATE IT IT WORKED. ..."

Essentially, rather than deal with the lies and correct them (on a daily basis - with names - in necessary) the media chooses to fight them on marketing tactics. It's beyond crazy at this point. For example calling base of misinformed people GOP uses for it's power "Conservatives" as if being a mob of misinformed people is a thing. It was a thing In Germany at one time to lie and making policy decision based on those lies. So basically the media allows a treasonous nazi like network allowed to operate in the open while leaving out the fact that THESE PEOPLE ARE BEING LIED TO and it's their job to correct these lies which they are not doing. Instead, "Fox News has won" in the attitude. So they go about doing useless things. If it wasn't for Trump they would all be losing right now.

This is how much Rachel Maddow has said;

This is how much more is out there (covered by the last real news show on TV, back in the day when we had news);

Rachel Maddow and her media co-horts are responsible for the lies by Fox News (a sister media channel) if they notice thier lies and do not seek to stop them. It's called Journalism folks. 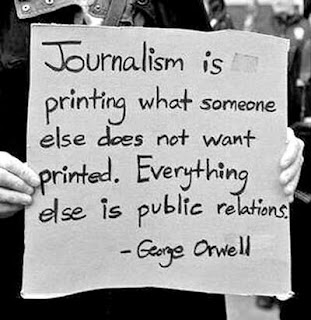 Other comments/analysis of the video;

Then at approx 1 min and 30 seconds we have a bit about Trump showing he was out there supporting the GOP Establishment (Bush 1) and GOP Establishment economics for a long time. So that will probably be the default position he ends up on after dancing around the issues for now, i.e. Trump will most likely use traitor economics if he ever becomes President.

Right at the beginning of the video Maddow acknowledges herself that 'even I say this is unprecedented alot' and it's true. She does. Everything that happens, no matter how predictable it was to people familiar with the information, comes out as 'unprecedented and mind blowing' for Rachel Maddow. Her primary skill seems to be generating excitement for information (whatever that information may be) and spreading it through powerful visual media (TV News).

BTW, if you believe what Rachel Maddow says that 'we should have seen this coming based on what's happened in the past', I would like to point out the following recurring events;

A History Lesson: The End of the American Empire

I’m here to talk about the end of the American empire. But before I do I want to note that one of our most charming characteristics as Americans is our amnesia. I mean, we are so good at forgetting what we’ve done and where we did it that we can hide our own Easter eggs.
I’m reminded of the geezer—someone about my age—who was sitting in his living room having a drink with his friend while his wife made dinner.
He said to his friend, “you know, we went to a really terrific restaurant last week. You’d like it. Great atmosphere. Delicious food. Wonderful service.”
“What’s the name of it?” his friend asked.
He scratched his head. “Ah, ah. Ah. What do you call those red flowers you give to women you love?”
His friend hesitated. “A rose?”
“Right. Um, hey, Rose! What was the name of that restaurant we went to last week?”
Americans like to forget we ever had an empire or to claim that, if we did, we never really wanted one. But the momentum of Manifest Destiny made us an imperial power. It carried us well beyond the shores of the continent we seized from its original aboriginal and Mexican owners. The Monroe Doctrine proclaimed an American sphere of influence in the Western Hemisphere. But the American empire was never limited to that sphere.
In 1854, the United States deployed U.S. Marines to China and Japan, where they imposed our first treaty ports. Somewhat like Guantánamo, these were places in foreign countries where our law, not theirs, prevailed, whether they liked it or not. Also in 1854, U.S. gunboats began to sail up and down the Yangtze River (the jugular vein of China), a practice that ended only in 1941, when Japan as well as the Chinese went after us.
In 1893, the United States engineered regime change in Hawaii. In 1898, we annexed the islands outright. In that same year, we helped Cuba win its independence from Spain, while confiscating the Spanish Empire’s remaining holdings in Asia and the Americas: Guam, the Philippines, and Puerto Rico. Beginning in 1897, the U.S. Navy contested Samoa with Germany. In 1899, we took Samoa’s eastern islands for ourselves, establishing a naval base at Pago Pago.
From 1899 to 1902, Americans killed an estimated 200,000 or more Filipinos who tried to gain independence for their country from ours. In 1903, we forced Cuba to cede a base at Guantánamo to us and detached Panamá from Colombia. In later years, we occupied Nicaragua, the Dominican Republic, parts of Mexico, and Haiti.
Blatant American empire-building of this sort ended with World War II, when it was replaced by a duel between us and those in our sphere of influence on one side and the Soviet Union and countries in its sphere on the other. But the antipathies our earlier empire-building created remain potent. They played a significant role in Cuba’s decision to seek Soviet protection after its revolution in 1959. They inspired the Sandinista movement in Nicaragua. (Augusto César Sandino, whose name the movement took, was the charismatic leader of the resistance to the 1922 – 1934 U.S. occupation of Nicaragua.) In 1991, as soon as the Cold War ended, the Philippines evicted U.S. bases and forces on its territory.
Since then we have discovered that a the Joint Chiefs of Staff has, at one time (for a fact), planned a false flag operation to frame Cuba for (i.e. killing American citizens to provoke a war through a manipulation of public opinion with the event as a catalyst):

In the early 1960s, America's top military leaders reportedly drafted plans to kill innocent people and commit acts of terrorism in U.S. cities to create public support for a war against Cuba.
Code named Operation Northwoods, the plans reportedly included the possible assassination of Cuban émigrés, sinking boats of Cuban refugees on the high seas, hijacking planes, blowing up a U.S. ship, and even orchestrating violent terrorism in U.S. cities.
The plans were developed as ways to trick the American public and the international community into supporting a war to oust Cuba's then new leader, communist Fidel Castro.
America's top military brass even contemplated causing U.S. military casualties, writing: "We could blow up a U.S. ship in Guantanamo Bay and blame Cuba," and, "casualty lists in U.S. newspapers would cause a helpful wave of national indignation."
We also know that a memo about Pearl Harbor warned FDR about the attack beforehand and got covered up, most likely because, the creation of the National Security Act of 1947 (which I have talked about at length here). List of article proofs (ignored by media like the Iraq War?); 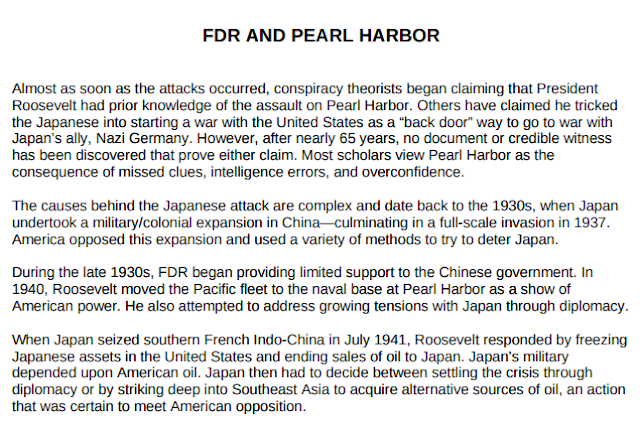 Telegraph: Pearl Harbour memo shows US warned of Japanese attackOn the 70th anniversary of Pearl Harbour, the attack that propelled America into the Second World War, a declassified memo shows that Japanese surprise attack was expected.

Remind you of anything?

We also know that the GOP was able to mislead the country into war ("President is always right", as John McCain seems to say here) and get the media to shut up about it ... and then cover it up!


Senate Intelligence Committee: Bush and Cheney Misled us on Iraq
In news that should surprise no one, a bipartisan report finds the Bush administration exaggerated threats of WMDs as well as Saddam/al Queda links.

Obviously, this will repeat again.

What about this one repeating itself?

Add to that the GOP's compulsion to deny science in almost all it's forms from climate change, to education, to women, economics and then the fact that such obvious scientific irregularities in the largest "terrorist" event in history leaves me with just one plausible explanation ... given all the facts available to me on the net and in the media and in science and in actual videos of the event... These are my conventional conclusions;

Did Islamic Terrorists Use Magic On 9/11 To Make The DEBRIS Of Flight 93 & The Pentagon Attack Plane Vanish?

Did Islamic Terrorists Use The Magic Of The Jinn To Plant Bombs In The 3 Buildings That Fell On 9/11?

Did The Islamic Terrorists Use Magic To Make Dick Cheney Give Stand Down Orders On 9/11 & Which Cheney Covered Up Later So As Not To Scare The Public?

A Look At Fox News "Hypnosis"