Background: Ted Cruz (The Joker) & Carly Fiorina (The Wicked Witch Of The West) Team Up!

Before starting this comparison between Carly Fiorina & Hillary Clinton I thought I should explain why some of you may experience cognitive dissonance when reading this. What is acceptable on one side is not acceptable on the other... so evil takes different forms of each side while retaining the same basic structure. It's amazing that each side is more often than not, blinded by a liar using words than please them than otherwise.

1 A. Carly Fiorina lies about her abilities while actually being a job killer and a major outsourcer of jobs to other countries - Video;


Published on the video page: Tell your friends about Carly's job killing record! Carly laid off 30,000 workers during her tenure as CEO of Hewlett-Packard but expects voters to believe that she can create jobs. In these tough economic times, California needs a leader that will bring jobs to the state, not ship them overseas because the labor is cheaper. 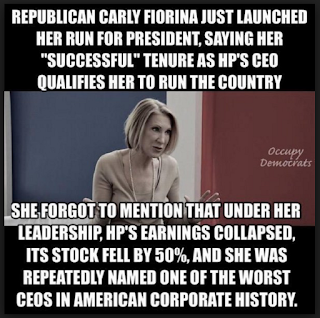 1 B. Hillary Clinton is also a job killer in that she supported NAFTA ("free trade") that sent jobs to foreign countries (outsourced through policy) and then supported the TPP (endorsing in 45 times) and called Obama's version "the Gold Standard" before saying the opposite (that she doesn't support TPP anymore) because it wasn't polling well (which, interestingly enough, seems to be why she is saying her "Iraq War Vote was a mistake"... i.e. polls).

The Damage Done To The Economy By NAFTA, Passed By Bill & Hillary Clinton in their 1st term by The Huffington Post;

My New Year’s celebrations this year were haunted by memories of January 1, 1994 — the day that the North American Free Trade Agreement (NAFTA) went into effect. I remember crying that day, thinking about the proud men and women in union halls across America, the Mexican campesinos and the inspiring Canadian activists I had met during the fight against NAFTA, and hoping desperately that our dire predictions would be proved wrong.
They were not. In short order, the damage started. And, we started to document it.
For NAFTA’s unhappy 20th anniversary, Public Citizen has published a report that details the wreckage. Not only did promises made by NAFTA’s proponents not materialize, but many results are exactly the opposite.
Such outcomes include a staggering $181 billion U.S. trade deficit with NAFTA partners Mexico and Canada and the related loss of 1 million net U.S. jobs under NAFTA, growing income inequality, displacement of more than one million Mexicancampesino farmers and a doubling of desperate immigration from Mexico, and more than $360 million paid to corporations after “investor-state” tribunal attacks on, and rollbacks of, domestic public interest policies.
The study makes for a blood-boiling read. For instance, we track the specific promisesmade by U.S. corporations like GE, Chrysler and Caterpillar to create specific numbers of American jobs if NAFTA was approved, and reveal government datashowing that instead, they fired U.S. workers and moved operations to Mexico.

Guardian: Fundraising video from group supporting GOP presidential candidate uses images and videos spliced from unrelated events, one of which depicts a miscarriage not an abortion 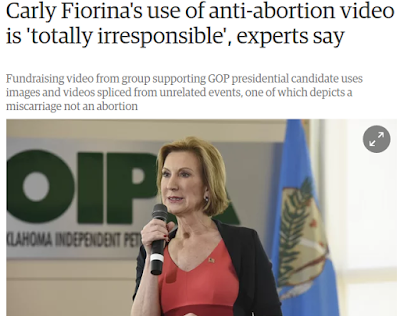 2 B. Hillary Clinton smeared black people by calling them super predators to push a right wing crime bill to help her and her husband win the 1996 election (she literally DOES seem to do ANYTHING to win... as Obama put it).

Video: Mass Incarceration: Can Hillary Clinton Undo Bill's Legacy On Crime?
Recently Hillary cut her ties with money from the private prison industry... in other words, she destroyed hundreds of thousands of lives and got paid for it! Who cares if she cuts off her ties years after making money from it and destroying people. It's an election. Her reason for cutting her private prison money ties is obvious (i.e. votes).As one journalist put it: To recap, Clinton voted to invade Iraq, backed job-killing trade agreements, suggested that black women on welfare were “deadbeats” who were “sitting around the house doing nothing,” called for “more police” and “more prisons” and “more and tougher prison sentences for repeat offenders,” and bases not only her campaign finances but her entire social universe on and amid the superrich who she resides among in Westchester and the Hamptons — because she is a realist who can get things done.
Later Hillary Clinton started the Obama birther movement with her smear of his birthplace and culture of his father using a picture.

Desperate and willing to do anything to win, the Clintons resorted to a naked form of racism aimed directly at white working-class voters in the rural portions of the state. Their message: Barack Obama cannot win because he’s black.
In the early stages of the campaign, it was Clinton’s cadre who kept playing the race card. In New Hampshire, Clinton’s co-chair, Billy Shaheen, accused Obama of being a drug dealer; then there was the photograph of Sen. Barack Obama in Somali garb leaked to the press by Clinton’s staff.
As anyone who has read the two major recent biographies of Hillary Clinton (Her Way: The Hopes and Ambitions of Hillary Rodham Clinton, by Jeff Gerth and Don Van Natta Jr.; and A Woman in Charge: The Life of Hillary Rodham Clinton by Pulitzer-prize-winning journalist Carl Bernstein) knows all too well, she will do whatever she has to do and say whatever she has to say in the unbridled (and unscrupulous) pursuit of power. The ash heap of her duplicity sprawls across decades and across various regions of this country — from Arkansas to the White House, from Illinois to, well, now, Pennsylvania.
Clinton is an inveterate liar — I am sorry, there is truly no other word for it — and as her ill-fated presidential campaign tumbles toward its inevitable demise, the personal deception that is at the core of her personality, and of her career, continues to reveal itself.

Both lie. Both frame. Both Carly & Hillary have used smears to target their chosen group of "evil". For Carly it was abortion and for Hillary, interestingly enough, it was black people. She smeared them to win in 1996 and tried again in 2008 but it backfired. This is the 'woman of progressive morals' some people want to elect.

3 A. Carly Fiorina was mean to the LGBT community

Article extract: 3) Gay Marriage Fib In May, Fiorina raised eyebrows when she said that she opposed a constitutional amendment overturning a Supreme Court ruling in favor of marriage equality, a reversal from her position in 2010 U.S. Senate race. “I think the Supreme Court decision will become the law of the land, and however much I may agree or disagree with it, I wouldn’t support an amendment to reverse it,” she said at the time. While Fiorina’s remarks didn’t gain much attention at the time, seeing that she seldom spoke about gay rights issues outside of defending so-called “religious liberty” laws, a conservative radio host asked her about them several months later. “I think that is a quote from someone else, not from me,” Fiorina said after the host read her a transcript of the remarks she had made.

3 B. Hillary - With the LGBT community, Hillary had no problem throwing them under the bus (so to speak) to win the 1996 election (DOMA Act). In fact, Hillary has no problems throwing anything or anything under the bus to win an election. It's quite pathetic. Then she smiles about it. People think it's cute. 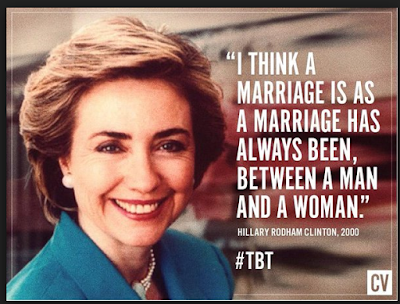 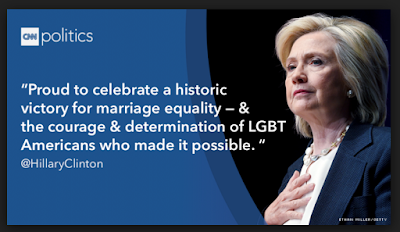 4 A. Carly Fiorina claims she will be good at foreign policy and making deals because of her travels and meetings with top officials (despite her previous record);

CNN: But in the months leading up to her White House announcement, Fiorina has advertised herself as a Republican alternative to Democratic presidential contender Hillary Clinton whose business experience -- and gender -- would give her an edge in the race.
She thinks she can take on Clinton in the realms of foreign policy and national security, given her globetrotting and dealmaking as a chief executive of an international corporation and hands-on experience in advisory roles, such as her work with Hayden.
And she undoubtedly will make the case that her international ventures are an asset in taking on her Republican opponents. Many are governors or freshmen senators who will have a challenge claiming long experience on the issues one handles as commander in chief.
In advisory work with the CIA, Pentagon and the National Security Agency, Fiorina provided guidance on computer data-sharing related to national security issues. And by the time she relinquished her role at Hewlett-Packard, the company was operating in 170 countries, 50 more than when she took the job.
During that time, she visited many of those places and met with leaders of some of America's most prominent allies and rivals.
"Like Hillary Clinton, I, too, have traveled hundreds of thousands of miles around the globe. But unlike her, I have actually accomplished something," Fiorina told a group of Iowans in Des Moines last January, a version of a line she repeats regularly on the stump. In almost every public appearance she references Clinton, and in many instances has specifically challenged the former secretary of state's foreign policy credentials.

Salon: Democrats, this is why you need to fear Hillary Clinton: The NY Times is absolutely right — she’s a bigger hawk than the Republicans - "Clinton is the last true hawk left in the" race, more belligerent than Cruz and Trump, the New York Times says

Hillary & Bill to Henry Kissinger to Bush-Cheney to the Beltway Media - An Unholy Alliance?

Hillary Has A Relationship With Henry Kissinger. Her Link To Bush & Cheney Is Now Complete.


5 A. Carly Fiorina is basically a liar
Article extract: Carly Fiorina is unique among all the candidates in the Republican presidential field for her visceral, aggressive hatred for anything resembling truth. Other candidates lie, of course, but they at least go to the trouble of dressing up their lies with weasel words and other forms of qualifying language that allow them to squirm their way out of fact checks. Fiorina doesn’t care about any of that. She makes firm, declarative statements that are unquestionably inaccurate, and when confronted with inarguable facts that prove her wrong, she insists against all evidence that she is correct and bristles at the very notion that anyone might challenger her. She does not care. She does not pretend to care. As far as Fiorina’s concerned, the fact that she said it is what makes it true.


5 B. Hillary Clinton is basically a liar...

Video of Hillary Clinton "before and after" ... 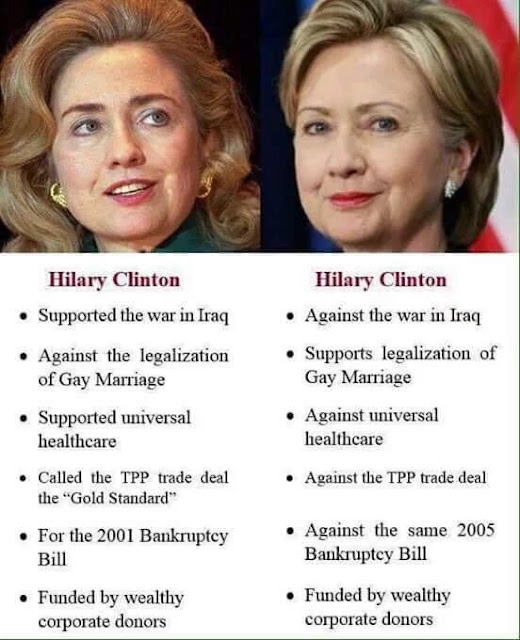 
This article explains Hillary's artful lie and thus her artful smear on Bernie Sanders by pretending SHE was telling the truth and HE was lying!
US Uncut: Hillary Clinton: “Name one time I changed due to Wall Street money.” Elizabeth Warren: OK, allow me.

there was one moment in which Clinton made a challenge to her detractors. She rallied against her label of “establishment,” claiming that the title is misused on her, and further claimed that her ties to Wall Street are a non-issue, alleging that she has never changed a vote as a result of campaign contributions or other financial influence. “Name one time I changed due to Wall Street money,” she challenged.
Unfortunately for her, there is already a record of quite possibly the most well-respected progressive detailing exactly that scenario.
Back in 2004, Elizabeth Warren sat with Bill Moyers to discuss a bankruptcy regulation bill that was first championed, then opposed by Clinton after she spoke with lobbyists. (This video recaps Clinton’s debate remarks. To start with the Warren interview, skip to 1:04.)