TELL THE TRUTH - MIKE YARD ON BILL CLINTON'S CRIME BILLAPRIL 11, 2016 -  Bill Clinton follows up on his comments about his 1994 crime bill with an almost-apology, and Mike Yard unloads on the former president. (3:46) 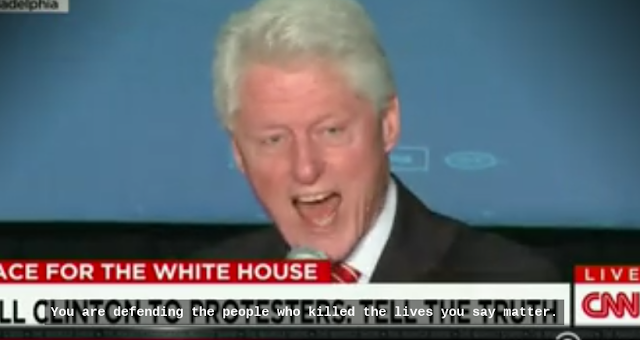 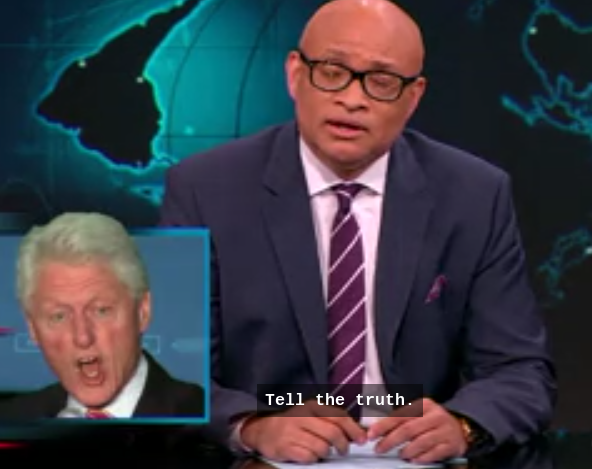 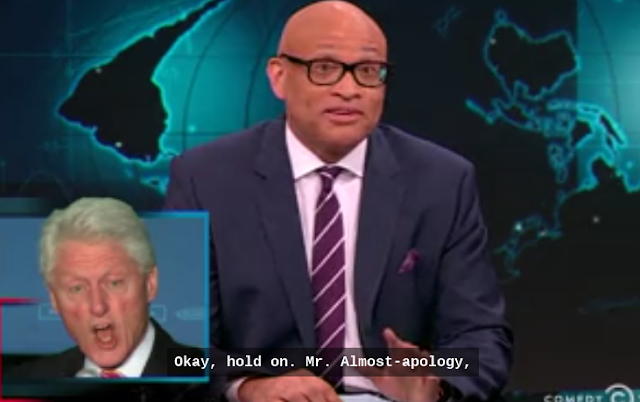 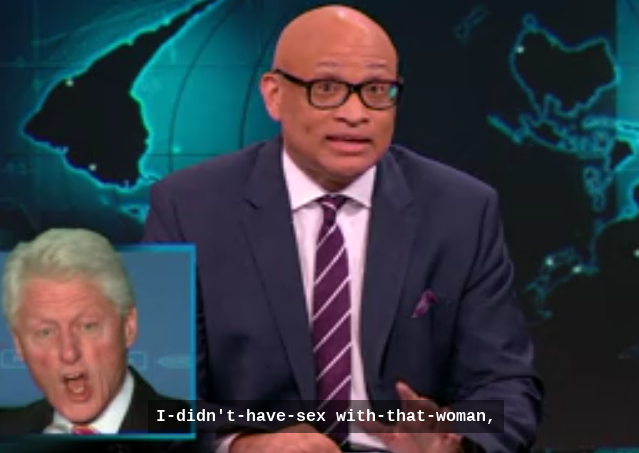 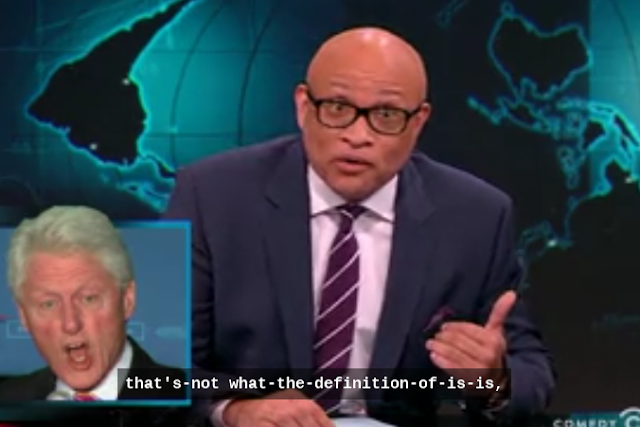 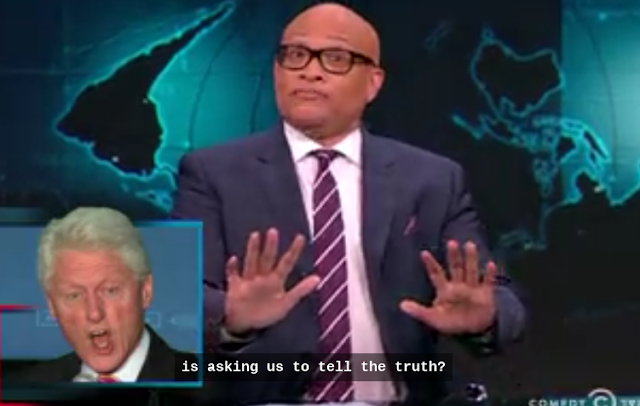 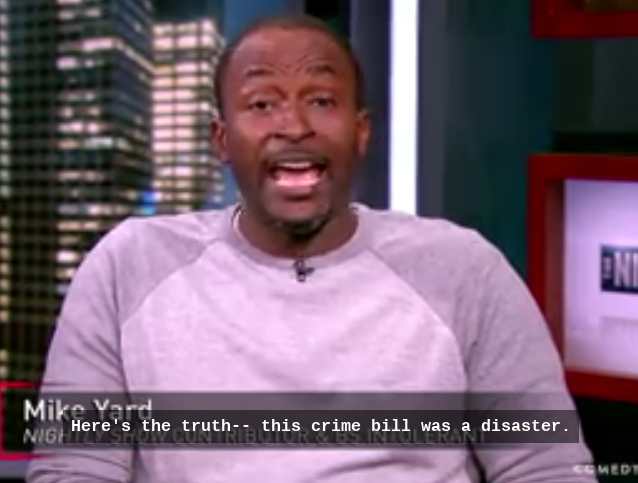 We confronted Bill Clinton about race: “In that moment he revealed himself and his true thoughts on black people” EXCLUSIVE: #Blacklivesmatter activists who took Bill on tell us what it was like, and how Hillary backers responded

During a Hillary Clinton rally in Philadelphia last week, Bill Clinton engaged in an 11-minute exchange with two protesters, Rufus Farmer and Erica Mines, who are critical of his controversial 1994 crime bill, the War on Drugs, and the impact of those policies on the black community.

In the midst of making repeated references to the “Black Lives Matter” movement, Bill Clinton made the following statement: “You are defending the people who killed the lives you say matter. … Tell the truth. You are defending the people who caused young people to go out and take guns.”
I recently spoke with Farmer and Mines about their experience with the former president, their thoughts on his controversial comments about “Black Lives Matter,” “black crime,” Hillary Clinton, and the future-present of black activism. This interview has been edited for clarity and length.
How long have the two of you been involved with social change work?
Rufus: I’ve been involved with organizing ever since the 2008 Obama campaign.
Erica: I’ve been involved for little over a year.
What was the moment when you decided that you wanted to become more politically involved? One event? Multiple events?
Rufus: There was a combination of events. The results of the Trayvon Martin case and how Zimmerman was not convicted had me very confused, upset and angry. Mike Brown happened, then Eric Garner. You have all these other victims of police violence as well, from Rekia Boyd to so many others. That is what pushed me over the edge. Erica and I didn’t know what black political organizations were out there. We then ended up as part of the Philly Coalition for REAL Justice.
Erica: I started becoming more politically aware once I lost a family member in prison. My cousin was killed by county officers in a West Virginia county prison. He was sentenced to thirty-plus years for a non-violent crime and was put in a maximum security facility. When I lost my cousin and it was labeled that he committed suicide that was what really pushed me to becoming an activist. I become politically aware when I first realized that the local Philadelphia government was never held responsible for the MOVE bombing that killed 11 men, women, and children.
It is a truism that “the personal is political,” but for black and brown folks, especially for the working class and poor in a carceral society, these conversations are not just abstractions for us. So when Bill Clinton is lecturing the two of you on “black crime” and his support for the 1994 Crime Bill what was going through your mind?
Rufus: There was a lot going on in a physical manner. People were approaching Eric and putting their hands on her. Most of the crowd was Hillary supporters, so you can imagine the things being said to us. They were putting up signs and trying to obstruct our anti-Clinton signs. At some point, the Philadelphia police were literally pushing us around. I didn’t really take it all in, Clinton’s retort, until we started watching more of the video footage from the event, seeing him pointing his finger, getting red in the face, making these wild accusations toward us. I was focusing more on my own safety, and of course Erica’s safety, and what was going on around us in that room.
I have written extensively about Donald Trump and the violence at his rallies. In the media, we have had many conversations about the thuggish behavior of his supporters. What was the environment like at Hillary Clinton’s rally in Philadelphia? How were you treated? What were some of the exchanges you had with Hillary’s supporters at the rally?
Erica: The narrative about protesters and activists is that we are the violent ones, that we are the thugs. But no one wants to capture the moment when someone is snatching a sign out of your hands, or when somebody walks over to you and literally puts their hands on you. Bill Clinton was not the only person wagging their finger in the building that day. The actual confrontation started when a white lady came up to me and told me that I needed to be ashamed of myself for disrupting the event. You also have black liberals and gatekeepers who are taunting you and going along with the chastisement.
When we were protesting, there were actually black men standing in front of me as a black woman, as if my concerns about police brutality and violence did not impact them as well. For me, as a black woman, I am very vocal when I get into my politics and messaging. But they always send another black woman over to me to tell me why I am wrong. That is how it started. A black woman told me that my sign was causing conflict with the people in the building. I told her that I will not put down my sign until the other people holding their signs did the same thing.
Rufus: I had someone, a black person actually, call me a demon when the rally was over. Our intention was to go in, just the two of us, not a mob, to stand their quietly in the rally and not say a word. Unfortunately, lots of people provoked us to start speaking.
Erica: A black woman also called us the “predators” too.

The Iraq War was Hillary vote to commit mass murder of colored people. But these are brown colored people so it doesn't affect the black culture in America... but it should because it reveals a very clear pattern of behavior by Hillary Clinton (that can be connected to the company she keeps... and no it's not Obama, it's Henry Kissinger and Bill Clinton)

Article: Hillary’s Iraq vote is disqualifying: It’s not enough to have experience if the judgment is wrong The Bernie/Hillary "qualification" debate really is important. It's essential to keep in mind the actual records

Before addressing the differences in their Iraq votes and favorability ratings, Democrats should take a trip down memory lane and revisit the 2008 Democratic primary. Now that Bill Clinton has displayed his true feelings towards Black Lives Matter, months after Southern states helped Hillary take an early lead, it’s important to remember that the Clintons utilized racism against Barack Obama. In 2008, Bob Herbert wrote a New York Times piece titled Of Hope and Politics documenting Hillary Clinton’s use of race and Islamophobia:

I could also sense how hard the Clinton camp was working to undermine Senator Obama’s main theme, that a campaign based on hope and healing could unify, rather than further polarize, the country.
So there was the former president chastising the press for the way it was covering the Obama campaign and saying of Mr. Obama’s effort: “The whole thing is the biggest fairy tale I’ve ever seen.”
And there was Mrs. Clinton telling the country we don’t need “false hopes,” and taking cheap shots at, of all people, the Rev. Dr. Martin Luther King Jr.
We’d already seen Clinton surrogates trying to implant the false idea that Mr. Obama might be a Muslim, and perhaps a drug dealer to boot.

Not long ago, as Mr. Herbert pointed out, Clinton even took “cheap shots” at Rev. Dr. Martin Luther King Jr; another forgotten fact of her 2008 campaign. The former New York senator did everything possible to portray Barack Obama as unrealistic and undermine Obama’s theme of hope and change.
Sound familiar?
Who’s drawing young people this election, offering hope and change, and appealing to the ideals of the average American?
It’s certainly not the person under FBI investigation. In terms of trying to crush hopes, dreams, and any genuine attempt at altering the status quo, Hillary Clinton is doing to Bernie Sanders what she and Bill tried to do against Barack Obama. The same complaints about tone (CNN reported “Bill Clinton complains about Obama’s attacks”) and attempts at vilifying Obama in 2008 are today being witnessed by Bernie Sanders. Ultimately, aside from the racism and Islamophobia, Hillary Clinton has used the same playbook against Bernie Sanders in 2016.
Hillary Clinton has always tried to embody pragmatism, despite the fact most Americans (67% of Americans, 30% of Democrats, 74% of Independents, and 64% of women according to Quinnipiac) find her “not honest and trustworthy.”
Hillary Clinton has negative favorability ratings nationally, with negative ratings in every major national poll.
In contrast, Quinnipiac writes “Sanders has the highest favorability rating of any candidate and the highest scores for honesty and integrity, for caring about voters’ needs and problems and for sharing voters’ values.”
Bernie’s interview with Cenk Uygur of The Young Turks highlights exactly why Sanders has the highest scores for honesty and integrity in 2016: Experience, without trust, is worthless.
In terms of Iraq, Bernie Sanders voted against the Iraq War, using the same intelligence that Hillary Clinton used to vote for the tragic invasion. Also, her view of Iraq in 2004 speaks volumes. A CNN piece in 2004 titled Hillary Clinton: No regret on Iraq vote highlights her thoughts of Saddam and weapons of mass destruction:

WASHINGTON (CNN) — Sen. Hillary Rodham Clinton said she is not sorry she voted for a resolution authorizing President Bush to take military action in Iraq despite the recent problems there…
“Obviously, I’ve thought about that a lot in the months since,” she said. “No, I don’t regret giving the president authority because at the time it was in the context of weapons of mass destruction, grave threats to the United States, and clearly, Saddam Hussein had been a real problem for the international community for more than a decade.”
“The consensus was the same, from the Clinton administration to the Bush administration,” she said. “It was the same intelligence belief that our allies and friends around the world shared.

Interestingly, Bernie Sanders vehemently opposed the Iraq War, even though “the consensus was the same, from the Clinton administration to the Bush administration.”
To all the revisionists who’d vote for Clinton, knowing that Bush’s neoconservativesmight advise her if she wins, Clinton stated “No, I don’t regret giving the president authority because at the time it was in the context of weapons of mass destruction.”
Clinton, like Dick Cheney, utilized the weapons of mass destruction defense.
In fact, Hillary Clinton used the same myths perpetuated by the Bush administration to justify her vote. A 2007 New York Times piece titled Hillary’s War explains how Clinton helped perpetuate the myth of Saddam Hussein being linked to Al Qaeda:

…Clinton continued, accusing Iraq’s leader of giving ‘’aid, comfort and sanctuary to terrorists, including Al Qaeda members.’’ This statement fit squarely within the ominous warning she issued the day after Sept. 11.
Clinton’s linking of Iraq’s leader and Al Qaeda, however, was unsupported by the conclusions of the N.I.E. and other secret intelligence reports that were available to senators before the vote…
Nevertheless, on the sensitive issue of collaboration between Al Qaeda and Iraq, Senator Clinton found herself adopting the same argument that was being aggressively pushed by the administration…