Background:
Ten Of Thousands Of Women Were Raped In the Military On Bill Clinton's Watch & He Hasn't Even Apologized!
Bill Clinton Paved The Way For The Financial Crisis Of 2008 With His Drive For Deregulation Culminating With The Repeal Of The Glass Steagall Act


First, notice that Bill Clinton was feeling bad about not killing Osama Bin Laden cause he would have had to kill 300 people,i.e. the entire village... Henry Kissinger style! (though how Obama was able to go into a city and ONLY kill Osama bin Laden is a mystery Bill doesn't talk about)...

ABC: Bill Clinton, Hours Before 9/11 Attacks: 'I Could Have Killed' Osama bin Laden

Hours before the 9/11 terrorist attacks, former President Bill Clinton told an audience in Australia about his missed chance to kill attack mastermind Osama bin Laden, according to audio released this week.
“I nearly got him. And I could have killed him, but I would have had to destroy a little town called Kandahar in Afghanistan and kill 300 innocent women and children, and then I would have been no better than him.

Now, notice that Bill Clinton AND Hillary Clinton not only bragged about a compliment by a well known war criminal Henry Kissinger... THEY ARE ALSO CLOSE FRIENDS WITH THE KISSINGER FAMILY! 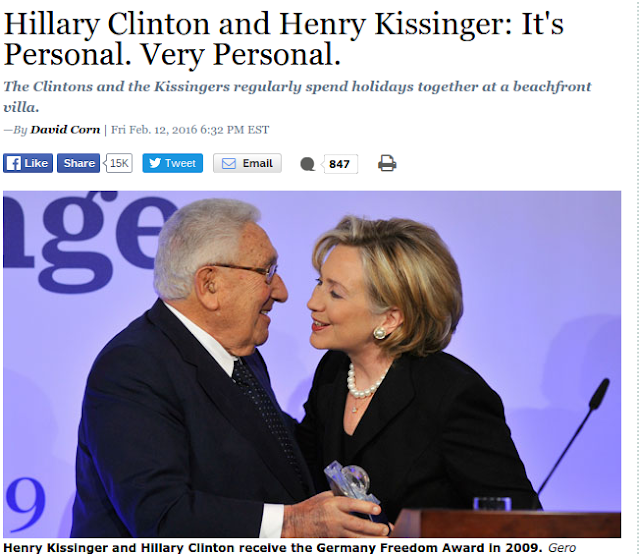 This campaign tussle over Kissinger began a week earlier, at a previous debate, when Clinton, looking to boost her résumé, said, "I was very flattered when Henry Kissinger said I ran the State Department better than anybody had run it in a long time. So I have an idea about what it's going to take to make our government work more efficiently." A few days later, Bill Clinton, while campaigning for his wife in New Hampshire, told a crowd of her supporters, "Henry Kissinger, of all people, said she ran the State Department better and got more out of the personnel at the State Department than any secretary of state in decades, and it's true." His audience of Democrats clapped loudly in response.

The article goes on to say;
It was odd that the Clintons, locked in a fierce fight to win Democratic votes, would name-check a fellow who for decades has been criticized—and even derided as a war criminal—by liberals. Bill and Hillary Clinton themselves opposed the Vietnam War that Nixon and Kissinger inherited and continued. Hillary Clinton was a stafferon the House Judiciary Committee that voted to impeach Nixon, and one of the articles of impeachment drafted by the staff (but which was not approved) cited Nixon for covering up his secret bombing of Cambodia. In the years since then, information has emerged showing that Kissinger's underhanded and covert diplomacy led to brutal massacres around the globe, including in Chile, Argentina, East Timor, and Bangladesh.
With all this history, it was curious that in 2014, Clinton wrote a fawning review of Kissinger's latest book and observed, "America, he reminds us, succeeds by standing up for our values, not shirking them, and leads by engaging peoples and societies, the sources of legitimacy, not governments alone." In that article, she called Kissinger, who had been a practitioner of a bloody foreign-policy realpolitik, "surprisingly idealistic."
This Clinton lovefest with Kissinger is not new. And it is not simply a product of professional courtesy or solidarity among former secretaries of state, who, after all, are part of a small club. There is also a strong social connection between the Clintons and the Kissingers. They pal around together.

OK. So hours before 9/11 Bill Clinton laments not killing innocent people for a chance at killing Osama Bin Laden. In any case, it was for leading this policy (& probably proposing it, using her influence on Obama) that Henry Kissinger complimented her. The strategy involved, as Kissinger describes it, 'is to kill as many people as possible so everyone is scared of us'.


Like in that movie Eagle Eye where they were basically killing people for low probability of being terrorists because other lives were simply not considered worthy of living. So, drone policy in particular, involves just bombing people randomly if they are brown and have a beard and are poor (common in that area). Curious.


Lets look at an article from MSNBC and see what inconsistencies, if any, crop up:

MSNBC: Bill Clinton, Hours Before 9/11 Attacks: 'I Could Have Killed Osama Bin Laden' 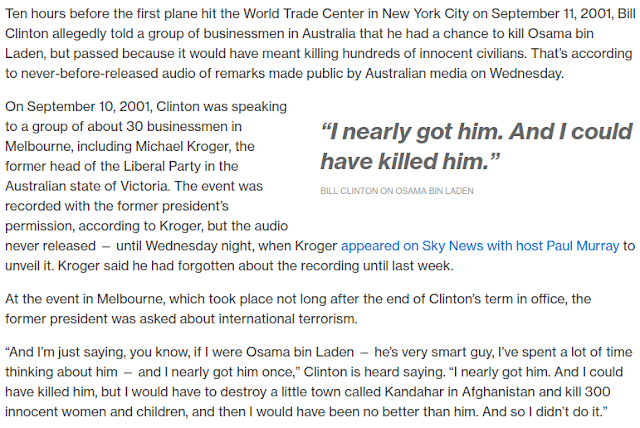 This only came out a couple of years ago. Compare this to George Bush who predicted that withdrawing from Iraq would be a bad idea AFTER signing the withdrawal agreement (there was also funding an unknown group called ISIS which no one talks about that Hillary Clinton MAY have been involved in. John McCain definitely was.). In any case, George Bush was declared a prophet by the right wing media and they have been going on about it every since.
Fox News Video:

----
The left wing media (your wing is dictated by who you can't find fault with cause of some emotional problem) hasn't said a a thing about how prophetic Bill Clinton is. Hillary Clinton should be getting some of that action. "Hillary's Husband Is So Prophetic He Lamented About Not Killing Innocent People To Get A Chance At Killing Osama Bin Laden 10 Hours Before 9/11! Now Henry Kissinger Complimented Them On Thier Genocidal Foreign Polices! Talk About Learning From Your Mistakes, Huh!"

ABC: Bill Clinton, Hours Before 9/11 Attacks: 'I Could Have Killed' Osama bin Laden


U.S. officials again considered a missile strike against bin Laden in May 1999 -- but, as was the case months before, they held back from striking, wary of conflicting intelligence reports. That skepticism may have been bolstered by the CIA’s accidental bombing on the Chinese embassy in Belgrade during the NATO war against Serbia, the commission said.
“This episode may have made officials more cautious than might otherwise have been the case,” the commission’s report stated.
From May 1999 until September 2001, authorities did not again actively consider a missile strike against Bin Laden.
Bin Laden was eventually killed in a 2011 raid by U.S. Special Forces in Pakistan.
If Obama could kill Osama Bin Laden without killing a whole village or city, why couldn't Bill Clinton do the same? Why did he have to feel sorry about not killing innocent people? Is that why Hillary kills innocent people en masse today and was complimented for it by her family friend Henry Kissneger? It seems Bill Clinton's moral compass as an ex-President and close personal advisory to Hillary is that killing innocent people is OK. Not just OK but recommended by Kissinger as a scare tactic to keep populations in submission. The more innocent people killed the better... just like any good self respecting terrorist group.

In any case, why isn't anyone in the media talking about, nay, RAVING ABOUT, Bill Clinton's prophetic statement on 9/11 hours before it happened that was just released recently?