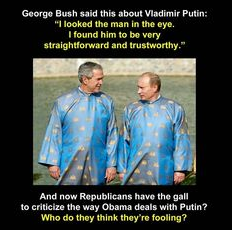 For years Fox News has been talking about how wonderful Putin is. How much of a darling he was of Bush. While on the other hand they have been beating down on Obama for everything he does EVEN when he just applies the GOP leaders policy. It's like it's even difficult to prove they are lying and affecting our National Security.

Such antics of attacking the President using lies is the sort of tactic one would expect from a communist country not ones own media. These sorts of attacks encourage Putin to be bold in what he does. It also presents a misleading view of how much power Obama really has and this may be forcing Putin to make miscalculations that could be bad for us as well.

On the one hand the irony of having our own media attack our President using lies (a scandal is only a scandal if you have facts to back your statements), while at the same time highlighting their false patriotism by putting our country in danger of a possible world war 3 with their rhetoric is a gotcha moment which I really want to rub in their faces.

On the other hand, I don't want to be killed in some media induced atomic blast.

This is just another example of how the corporate media has become dangerous fro National Security. We already know that these corporate media channels have a tendency to avoid news that reflects badly on them  (reflected in this movie as common pop culture knowledge) and on top of that they have formed virtual monopolies that encompass, pretty much, the whole media. Having a monopoly in the media is just as dangerous as having a State controlled media. As the media has clearly proven.

Here are samples of some "Pro-Communist" Fox News Propaganda Videos

Here is a hint of how this propaganda works for Putin