Colbert Report Introduction: The Republicans' Inspiring Message on Climate Change
Oklahoma Republican James Inhofe gears up to chair the Senate Environmental Committee despite literally writing the book on global warming denial. (4:41)
Rather than giving climate change deniers the normal; 3% of airtime they are creating false equivalency that the climate change debate is at 50-50 when it's really 97-3 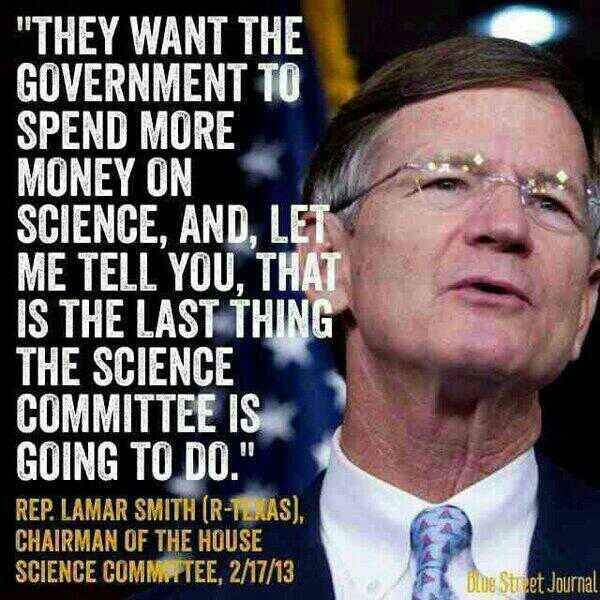 It's a politicians job to serve the community by helping them cope with problems USING FACTS. So, we elected a crackpot, Jim Inhofe, to office. Now what? He has written a whole book (or more likely, had it ghost written by Bill O Reilly's writer) in which he claims that everything about Climate Change is a hoax.

In other words, Jim is claiming that 97% of scientist have gotten together to fool the American People. Fine. Normally when people talk of conspiracies they talk of events that can't be proven. In this case, climate scientists are easy to find and love to talk so we should hold hearings and call as many scientists as we can find who study climate change and interrogate them for ourselves on TV. Not like this false equivalency thing the media seems to be doing... 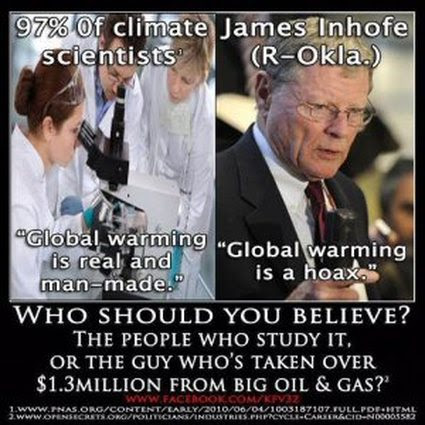 What "Republicans" such as Jim seem to be counting on is their news echo chamber, created and pretty much run, by them.

Bogus story exposes risks of conservative ‘invented news’ - Rachel Maddow shows the right-wing hypocrisy on prostitution scandals when the political advantage is in their favor, and points out the danger of the conservative movement’s preference of their own version of news instead of real news.
Conservative media creates parallel universe
Rachel Maddow discusses how the conservative media has built a narrative based on what people want to hear, not on the facts, about President Obama’s nominee for Attorney General Loretta Lynch.
Here is an example of how Rupert Murdoch uses his paper to sell ideas that are contrary to normal established science.

Rupert Murdoch Owned WSJ: The Myth of the Climate Change '97%'

Bombshell: Koch-Funded Study Finds ‘Global Warming Is Real’, ‘On The High End’ And ‘Essentially All’ Due To Carbon Pollution 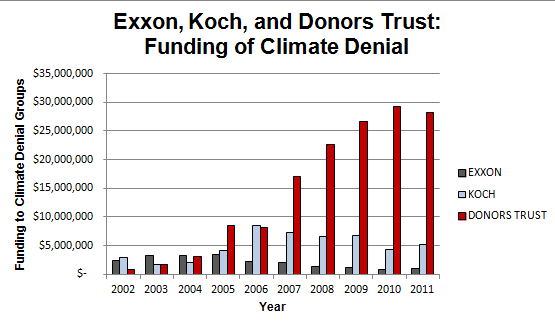 What Texas is expected to look like in about 30 years (i.e. Not much of Texas left!); 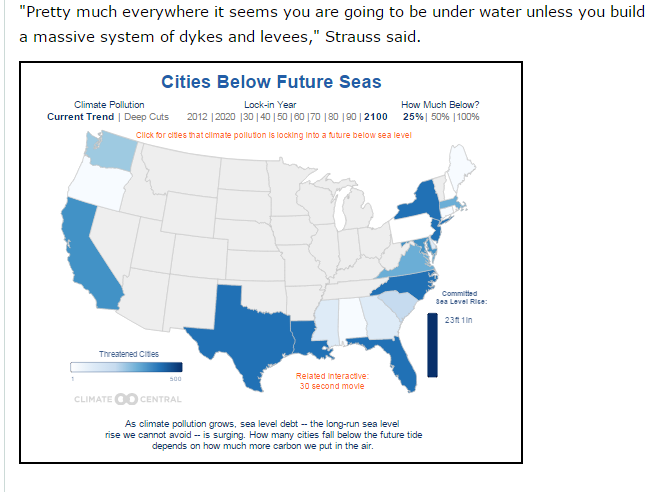 Remember climate change? The issue barely comes up with any substance in our current political dialogue. But bringing climate change back into our national conversation is as much a communications challenge as it is a scientific one.

This week, in an encore broadcast, scientist Anthony Leiserowitz, director of the Yale Project on Climate Change Communication, joins Bill to describe his efforts to galvanize communities over what’s arguably the greatest single threat facing humanity. Leiserowitz, who specializes in the psychology of risk perception, knows better than anyone if people are willing to change their behavior to make a difference.

“[A] pervasive sense up to now has been that climate change is distant — distant in time, and distant in space,” Leiserowitz tells Bill. “And what we’re now beginning to see is that it’s not so distant. I have a nine-year-old son — he’s going to be my age in the year 2050. I don’t want him to live in the world that we’re currently hurtling towards.”
Old Climate Change Information:

Will We Ever be Prepared for Climate Change?

Climate change is a fundamental threat to sustainable development and the fight ...global warming, but save millions of lives says a new World Bank report.

The world is starting to tackle climate change, according to a report compiled by the UK's official advisory body
UPDATE:

These are people from an archaic age compared to ours who happen to be around because of advances in Medicine.  Simply because he believes that God would never hoist Climate Change upon him because the thought is terrifying doesn't make it so. I'm sure people thought the same about Pearl Harbour & World War 2. We don't deal with problems by avoiding them or hoping they will go away. That's for idealists to do. For religious people in a dark age to pray on. Not for citizens of an Industrial Economy.

A politicians job isn't to have beliefs based in conjecture but to prepare for the worst - to protect it';s constituents - and hope for the best. By creating an echo chamber of lies to tell  their constitutes AND THEN claiming to be doing their constitutes will is betrayal on the verge of treason. If not actual treason. Listening to priests is the job of religious people. Let the religious people hope for no climate change. If that fantasy happens, good for them. It's not a politicians job to hope for the best while ignoring science and doing nothing.

The analogy here is that when you get a one degree fever, you are relatively OK to go to work. If you have a two degree fever, you are feeling sick and you have to take the day off. If your fever gets to 3 or 4 or 5 degrees then your brain begins to slip into a coma. IN the same way, as the average global temperature increases the earth begins to get a fever. If the temperature increases too much then the earth will go through convulsions. Some areas will get hotter, some may get cooler. But the fluctuations in weather will begin to get dangerous (more than the preliminary droughts and its resulting fires we are seeing - more than the floods we are seeing - kinda, there seems to be an international news block here in Oklahoma. I tried to get a proper international news channel - BBC UK - and ended up with BBC America which I have yet to see a news program on. So far they have been showing TV shows. Cancelled the cable package, of course).

Here are links to research I did for my website Instant Stress Management.com while I still had TV access to international news:
Posted by Abe at 8:30 PM