Background: The Fox News Love Affair With Putin Is Affecting Our National Security

With Syria, after an extremely long media campaign which couldn't have been good for them (our media is particularly toxic and treasonous), when the time came for action the Traitor Inc. part of the media (the GOP Conservative network of traitors) decided that a fact that Vladimir Putin if supplied Syria with weapons meant that attacking/bombing Syria would lead to World War 3. Russia supplied them with weapons not troops. Even we supplied Iraq with weapons but never sent them troops till we invaded despite the wars Saddam got into for us. 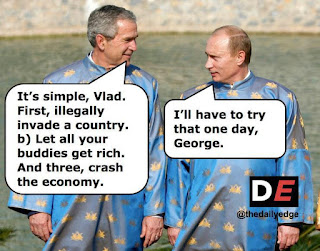 First off, I would like to say that the whole "bombing Syria will lead to World War 3" was a lie and they knew it. If they didn't know it then they would be screaming World War 3 for helping Ukraine with their invasion problem (which I believe Traitor Inc encouraged - I'm usually right on such things). I think the script writers (Murdoch & Co.) knew that there was no threat of World War with Syria BUT we know trying to aggravate this situation COULD lead to world war so the Traitor Inc.s media has been silent on this thus far (they might start up after this as they like to copy me and pretend they said it and have been doing this since before the Syria incident but I was in no position to talk about it till know. I think I have enough proof now, thanks Fox News!).

SO why would GOP's Traitor media claim attacking a two bit tyrant that Russia did some business with to make money by selling them some weapons we could easily destroy BUT now that there is an actual confrontation with Russia they are leaving out the "this will lead to World War 3 " rhetoric? The furthest they seem to go is "this is the next cold war". Why couldn't bombing Syria have led to a cold war? Nothing on that and it's been a while now.

Part of the problem with Syria was Fox News love affair with Vladimir Putin which really took off after his NY Times Op-Ed (Putin clearly saw what the GOP was doing with it's propaganda and decided to participate which should be even more humiliating for the party that shouts socialist/communist at everything that moves). I think the fact that Assad raped and killed so many of it's citizens really turned the GOP & it's Media on. Think about it. The GOP is a party that promotes rape (it's a biblical thing) and war. While at the same time we know they misled us into a war to get oil while killing 1.2 million non-whites and 4000+ soldiers. We also know that the mysteries of 9/11 have gotten to a point where it's likely those building were demolished making the GOP at least as bad as Assad PROVIDING they get the freedom to do what they really want. Unfortunately for the GOP America hasn't broken apart to a point where they could have fun the way Assad Al-Bashar does. That said, the GOP and Assad are allies or at least have behaved as such so their love affair with Putin makes sense as both are structured like Military Dictatorships while calling themselves democratic or oligarchical. For Fox News women Putin must be a real turn on.

Here are some reminders of Fox News and the GOP's love affair with Putin which is why they allied with Putin against helping Syria thereby creating a vacuum - with Assad's help i.e. he only left the most violent and anti-US radicals alone so they could grow. Smart strategy. Fortunately for him, the GOP is clearly helping with this strategy. There's no way they don't know about this (GOP literally created ISIS, I'm not speaking metaphorically, just following the influence and lie trail). At the same time John McCain & Lindsey Graham pushed their allies in the Arab world to fund those ISIS radicals against Assad (the Arab world is allied with the rich people here, especially the GOP that why there has been no investigation into the money trail for the "9/11" Al Qaeda terrorists). IN other words, Assad helped create a place ISIS could grow and the money trail for ISIS can be traced directly to John McCain's & Lindsey Graham's influence. On top of that we know that Dick Cheney - and thus the whole GOP - knew that invading Iraq would create a Vacuum which is why we stayed for 10+ years and is also how ISIS was created with continuous GOP involvement... not to mention the fact that the ISIS commanders are literally from the Saddam's regime which makes sense since our goal in Iraq was to take out all the leaders of society so it couldn't function and would fall apart. That was the strategy by the Generals and they succeeded in breaking Iraq to a point where 1.2 million Iraqi's were killed (what they say is that they 'made a mistake it taking out 5 levels of society thus allowing it not to function' I think no one is that stupid especially since I have a video of one of them saying so themselves). SO mission accomplished (clearly what they did in Iraq & later Syria, was intentional)

Note: To "Libertarians" Putin was being Constitutional!  (Judge Napolitano did one of his flip flops here supporting Putin then not supporting Putin, which his sheeple don't notice. Though having a war monger like John McCain support something also had it's effect, maybe that's why John McCain funded ISIS for revenge for the American people disagreeing with him? What people had was a reaction to the person. National Security issues no longer compute in the American debate just hyped up fearmongering). Fox News & Fox Business are owned by the same guy, and both have the right to lie.

Here is some of the commentary on Putin Op Ed which many on the right loved so much  with Vladimir Putin:

Daily Show: Vlad the Insulter - Vladimir Putin's op-ed in the New York Times shows him to be the Larry David of international diplomacy. (2:42):


Note: There is precedent for the GOP (The War Party) funding fundamentalism and terrorism.