Jung talked about how meaningless slogans have become the norm of politics in his book 'Modern Man In Search Of A Soul'.

No where can you see this more than in the "free speech" protests of France.

March of the Parisiens - World leaders march in solidarity with France at a rally for free expression following the Charlie Hebdo attack, but U.S. representatives are curiously absent. (7:07)


Notice: Of the leaders marching, most don't seem to be following any sort of free speech law; 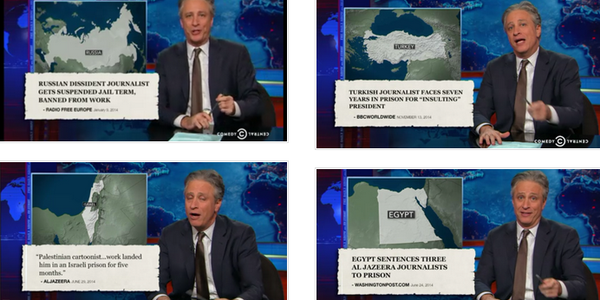 Even France has made it illegal to say certain things, insulting Muslims just isn't one of them. I think France hating Muslims is a cultural thing, like the way the French hate Jewish people. Fox News & a good portion of America just seem to agree with the French on the Muslims thing, though not the Jew thing... yet. Interestingly enough, France is overreacting proving free speech was never the issue.

In other words France is telling the world, "don't be offended by what we say, we can draw whatever we want, but we reserve the right to be offended what you say or draw about us".

France seems to have inherited allot more from Napoleon than people like to think.


Insight into the cultural reaction:

The Condemnologists - Following an insensitive tweet from Rupert Murdoch about Muslims, Jason Jones, Jessica Williams and Hasan Minhaj condemn those responsible for the Charlie Hebdo attack. (5:41)

Boko Haram in Nigeria  Senior International Correspondent Trevor Noah fills Jon in on what Boko Haram was doing in Nigeria while the world was focusing on the Charlie Hebdo attack in Paris. (5:01)