Background: "The Emergence Of The Corporate Oil War Economy In The USA (Proven Mostly In Cartoons!)"http://www.culturesocietyblog.com/2013/03/the-emergence-of-corporate-oil-war.htm 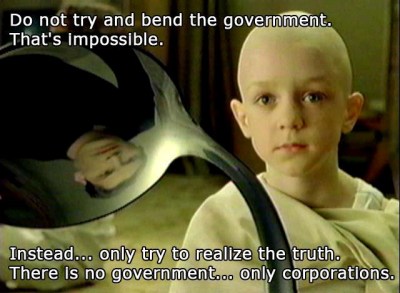 
System of a down - hypnotize from aysa on Vimeo.

"Propaganda made you buy it"... 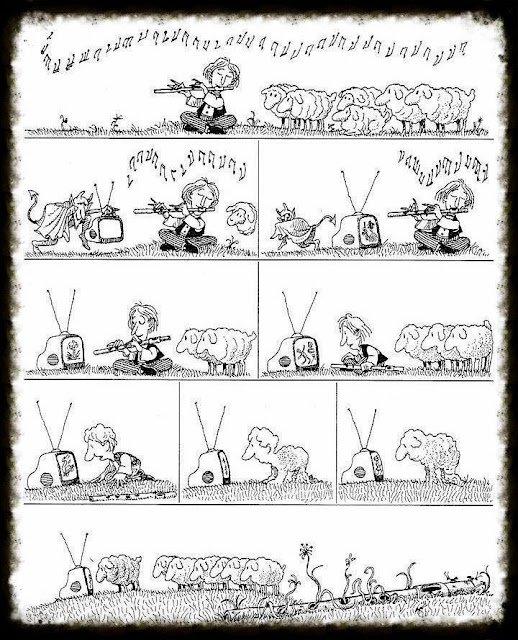 Background for how propaganda works:


From Bill Moyers: How big money and big media have coupled to create a ‘Disney World’ of democracy

Here is an example of using hypnosis through entertainment television:

It is because of "News" entertainment rhetoric by shock jocks like Glenn Beck that he can say pretty much what he wants and get away with it without any media scrutiny: GOP/Tea-Party Nonsense In A Nutshell: Outsiders are "Nazis"


By the way... notice that he's using entertainment hypnosis - like the way cartoons work - to pretend his interpretation of Road to Serfdom is accurately portrayed by him and not some decoy, i.e. it's actually the GOP & NOT Liberals that are the "Nazis" i.e. fundamentalism sticking to their uninformed beliefs without any investigation. As for calling Liberals Nazis? Standard mirror tactic(pretending the other IS what you are and hiding behind that). I covered this book in more detail in this post.

Hitlers Children (are the parallels coincidence)...

At  1 min 30 secs  encouragement to have more children as they are needed for the army.

The book changed to "Road to Serfdom", most recently.

The rest of the cartoon explains how the basic education of a Nazi child works. Notice the parallels with GOP rhetoric here: Ducktators: An Ancient Cartoon With Modern Lessons   i.e. guilt and shame are combined with anger to train a Nazi-Child /GOP-Adult.

Notice the similarities between Hitler's Nazi policies and modern GOP policies? Here is a visual representation...

What Is Mind Control?     Many people often think that hypnosis can used to control minds. I have shown in an earlier article the hypnosis cannot control minds. It can however be very useful in influencing minds and is used extensively in advertising in combination with the techniques of NLP (which I will write about later).    The question that invariable arises in everyone’s mind is whether mind control possible at all? If so how?    Mind control can be done in 2 ways; with authority and fear.    If you are told something by someone whose authority you simply cannot question then you will believe what you are told without any investigation or skepticism. That is a form of mind control.    Here are 2 examples;        Your religious leader interprets a verse of your holy book and you believe the interpretation given to you without seeking to understand it yourself then that is a form of mind control.        Your political leader tells you what he/she thinks is the reality of a situation and you believe it without question or investigation. This is also a form of mind control. – This can also manifest in a different way. You may not trust your countries political leader but you do trust the political views of favorite talk show host or news channel. If you believe what your news channel host tells you without question or investigation, once again you are under the influence of mind control.    In short mind control through authority works if any view an authority figure is accepted without question or investigation. Note: Getting angry at a point of view isn’t questioning/investigating the view it is ‘reacting emotionally’ to a viewpoint.     The next way of mind control is through fear.        If someone points a gun at you and commands you to lay down and you do (which is the sensible thing to do). That is instant mind control through fear. This is a more overt form of mind control but just as effective. Works just as well if a big country points a big weapon at a small country (big in land or military might).        If a political or religious leader paints another group of people as evil and that they will destroy you then they have a twofold mind control effect. First there is the fear of the ‘evil’ group and the fear that they will be attacked by the ‘evil group’. Then there is the authority effect of believing the leader with little or no investigation.    Fear combined with authority to issue commands and orders is the most powerful method of controlling minds as the authority removes the ability to question and the fear spurs the sheep to action. Perfect mind control.    Hypnosis by itself is just a state of highly focused attention and if any suggestions are made that go against the subject’s belief system then the person will snap out of it.    If a state of highly focused attention is created with fear and authority then the situation is markedly different. A person will naturally want to avoid the object of fear – often without question whether the fear is justified – and then turn to an authority figure for guidance. If the authority figure lacks morals then we have a dangerous situation of mass mind control.    With a hypnotist a person is already a little wary because of the popular conception of hypnosis as mind control. This wariness makes it impossible to exert the level of authority and/or fear needed for mind control. With a trusted authority figure there is no caution and suggestions/ideas/beliefs can be installed directly into the subjects unconscious.     Also, a person with authority and the ability to induce fear in his/her subjects has no need for the techniques and knowledge of hypnosis. Techniques of influence are not needed when you can shut down the ability to reason with a simple statement.In other words, your strong emotions can be used by others with rhetoric. These people can be honourable or dishourable in nature. An honourable one is like a good teacher who helps you get started on a career. A dishonourable one is like a politician who lies for his and his buddies benefit.

History & Structure Of Stock Markets In Cartoons and It's Future http://economics-proofs.blogspot.com/2013/04/history-structure-of-stock-markets-in.html