The Case for Monopoly/Oligopoly Regulation In The News Media Industry (related to "Monopoly" i.e. what Monsanto has in the food market in the USA)

Foodopoly: The Battle Over the Future of Food and Farming in America from Monsanto to Wal-Mart


Bill Moyers & Michael Pollan on Food Policy: November 28, 2008
Few people reflect and report more astutely on the state of American food production and consumption than Michael Pollan. Beginning with his fascination in plant cultivation, The Botany Of Desire, Pollan has become a mixture of reporter and prophet, documenting the state of American food and warning of the consequences if we don’t change our ways. In this episode of Bill Moyers Journal, Moyers and Pollan talk about America’s food present and food future.

Michael Pollan is the author, most recently, of In Defense of Food: An Eater’s Manifesto. His previous book, The Omnivore’s Dilemma: A Natural History Of Four Meals (2006), was named one of the ten best books of 2006 by the New York Times and the Washington Post. Pollan served for many years as executive editor of Harper’s Magazine and is now the Knight Professor of Science and Environmental Journalism at UC Berkeley.

MICHAEL POLLAN: I have an understanding of my strengths and limitations. Well, you have to understand that that department of the government, the $90 billion a year behemoth is captive of agri-business. It is owned by agri-business. They're in the room making policy there. When you have a food safety recall over meat, sitting there with the Secretary of Agriculture and her chief of staff or his chief of staff is the head of the National Cattlemen's Beef Association. It's all worked out together. So, I don't know, I mean, I think that the department, in a way, is part of the problem. And they're also very dependent on the legislation that the House and Senate Agricultural Committees cobble together. And so I think you'd get swallowed up there very easily. I think that and I don't want this job either. What Obama needs to do, if he indeed wants to make change in this area and that isn't clear yet that he does at least in his first term I think we need a food policy czar in the White House because the challenge is not just what we do with agriculture, it's connecting the dots between agriculture and public health, between agriculture and energy and climate change, agriculture and education. So you need someone who can take a kind of more you know, global view of the problem and realize that it's an interdisciplinary problem, if you will. And if you do hope to make progress in all these other areas, you have to make sure that if the Surgeon General is, you know, going on about the epidemic of type 2 diabetes, you don't want to be signing farm bills that subsidize high fructose corn syrup at the same time. So you have to kind of align — Read More.


To gain some perspective on what the risks are with "genetic manipulation"...

The case of the exploding melons:

Farmers in eastern China have been left perplexed after their watermelons began to explode one by one.

An investigation by state media found farms in Jiangsu province were losing acres of fruit because of the problem.

The overuse of a chemical that helps fruit grow faster was blamed in one report by China Central Television.

But agriculture experts were unable to explain why chemical-free melons were exploding. They cited the weather and abnormal size of the melon as factors.

China Central Television said farmers were overspraying their crops with the growth promoter, hoping they could get their fruit to market ahead of the peak season and increase their profits.

3. Check out how far genetic manipulation has gotten in China in thier desperation to feed a billion people...

how far genetic manipulation has gotten in China in thier desperation to feed a billion people...

BTW, feeding the world is possible, it's just a matter of efficient production and distribution (I have my own general vision of where agriculture must go to be investment intensive while leaving room for private business growth which can be adjusted to fit local needs)... "executive director of the United Nations' World Food Programme, said a 17-cent package of nutrients with a chickpea base can meet the needs of a hungry infant, and more than enough food is grown to feed everyone,"


Genetic food manipulation needs to be monitored in a transparent manner... i.e. all food should be clearly labeled and environmental effects of various external factors need to be analyzed to understand BOTH the effects of gentic manipulation of food AND how to make sure we have more of it and it's easier to grow (without our global industry going kaput! Notice how everything in the following video is connected to just one crop... which just got mostly wiped out!)


Note - News Clips & Jokes From The Colbert Report:
The corn crop failure will cause price rises from poultry to beef to ethanol because they are all fed corn!

While on one side you have a weak production chain linked to one crop in a badly managed environment, on the other side you have some weird genetic manipulation going on to meet the need for food.

Given the nature of the agriculture industry in our age, with its diseases, bird flus, horsemeat scandals, etc. how can any responsible adult say that food shouldn't be labeled with all the contents? 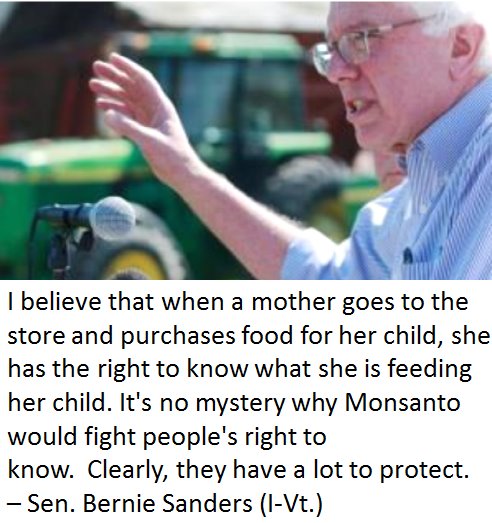 The Vermont Legislature earlier this year considered a bill that would have required labels on foods that contain genetically engineered ingredients. The House Agriculture Committee heard testimony from 111 citizens and hundreds more crowded the Statehouse to show their support. Despite passing by a lopsided 9-1 vote in committee, the bill languished after Monsanto threatened to sue the state.
Similar strong-arm tactics by one of the world's leading producers of genetically engineered foods and herbicides have been employed elsewhere by Monsanto, the multi-national company that posted $1.6 billion in profits last year. "It's no mystery why Monsanto would fight people's right to know," Sanders said "Business is booming for the chemical company.  Clearly, they have a lot to protect."
The Sanders Amendment, cosponsored by Sen. Barbara Boxer (D-Calif.), acknowledges that states have the authority to require the labeling of foods produced through genetic engineering or derived from organisms that have been genetically engineered.

The measure also would require the Food and Drug Administration and the U.S. Department of Agriculture to report to Congress within two years on the percentage of food and beverages in the United States that contain genetically engineered ingredients.

"All over this country, people are becoming more conscious about the foods they are eating and the foods they are serving to their kids, and this is certainly true for genetically engineered foods," Sanders said. "I believe that when a mother goes to the store and purchases food for her child, she has the right to know what she is feeding her child."

In the 1990s, there was consensus among scientists and doctors at the FDA that genetically-altered foods could have new and different risks such as hidden allergens, increased plant-toxin levels and the potential to hasten the spread of antibiotic-resistant disease. Those concerns are mounting. In just three days, the American Medical Association will consider resolutions calling for new studies on the impact of genetically-altered foods. The American Public Health Association and the American Nurses Association already passed similar resolutions.

Sanders stressed that labeling genetically-altered foods will not increase costs to shoppers. He also disputed claims that genetically engineered crops are better for the environment. Instead, he said, the use of Monsanto Roundup-ready soybeans engineered to withstand exposure to the herbicide Roundup has caused the spread of Roundup-resistant weeds, which now infest 10 million acres in 22 states with predictions of 40 million acres or more by mid-decade. Resistant weeds increase the use of herbicides and the use of older and more toxic herbicides.

The Sanders Amendment is about allowing states to honor the wishes of their residents and allowing consumers' to know what they're eating.  "Monsanto and other major corporations should not get to decide this, the people and their elected representatives should," Sanders said.


Read more about what Citizens of the world should be wary of:

Foodopoly: The Battle Over the Future of Food and Farming in America from Monsanto to Wal-Mart