Hitler's Minions In Texas! Are Neo-Nazi's The USA's Answer To The Holocaust?

Background: U.S. claims Jewish settlements are an obstacle to peace, but continues to give Israel generous foreign aid 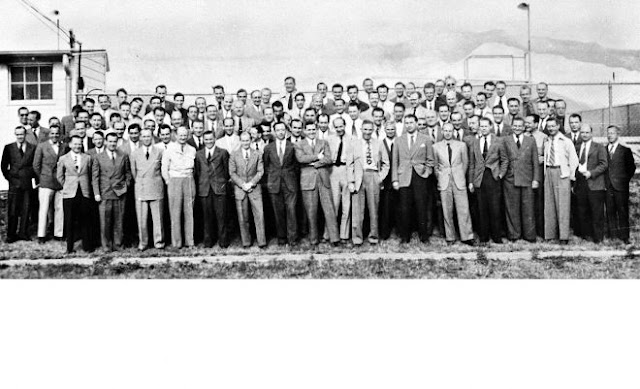 "Operation Paperclip" scientists at Fort Bliss, Texas, in 1946. Until 1945, these men worked for Adolf Hitler, but as soon as the war ended these “rare minds” began working for the American military and various intelligence organizations, the details of which remain largely classified. Rocket scientist Wernher von Braun is in the front row, seventh from the right with his hand in his pocket. Source: NASA

The above is published on the Fox News website. Whats utterly amazing is that since World War 2 America has increasingly become more and more filled with hate groups, particularly of the Neo-Nazi variety... did Hitler actually win the war? His message now fills the United States of America! Well, not really 'fill' more like permeates the society at a subliminal level where good citizens try to compromise with haters and end up adopting some level of hate for balance. The Nazi's never should have been allowed to enter America, now their groups cover the countryside. Be careful, Hitler found a way to attack from within!

Here is a website devoted to something Nazi related.

To check out a map of how far the hate groups have spread - including the Nazi invasion groups - check out his website.

Fox News has to voice the opinion of its constituents - it is important to keep in mind that their constituents includes the Ku Klux Klan and The Neo-Nazi's. thus, their broadcast has to encompass all their views or they will lose ratings.

"If you tell a lie big enough and keep repeating it, people will eventually come to believe it. The lie can be maintained only for such time as the State can shield the people from the political, economic and/or military consequences of the lie. It thus becomes vitally important for the State to use all of its powers to repress dissent, for the truth is the mortal enemy of the lie, and thus by extension, the truth is the greatest enemy of the State." Joseph Goebbels

“Through clever and constant application of propaganda, people can be made to see paradise as hell, and also the other way round, to consider the most wretched sort of life as paradise.”
Adolf Hitler

“See, in my line of work you got to keep repeating things over and over and over again for the truth to sink in, to kind of catapult the propaganda."

Mitt Romney On Abortions (For and Against!) http://www.culturesocietyblog.com/2013/03/mitt-romney-on-abortions-for-and-against.html

The source of the "legitimate rape" rumors which have become GOP party policyhttp://www.culturesocietyblog.com/2013/03/the-source-of-legitimate-rape-rumors.html

Rick Santorum on abortion: A child conceived through rape should be accepted as a 'gift from God'http://www.culturesocietyblog.com/2013/03/rick-santorum-on-abortion-child.html

A GOP Woman Caught Lying Or She Thought USA Is India! http://www.culturesocietyblog.com/2013/03/a-gop-woman-caught-lying-or-she-thought.html


Introduction to modern physics for laymen and physicists(who, for the first time in a VERY VERY long time, are on the same footing)...

Brian Greene (this guy likes the clock model of perceiving the Universe)
Brian Greene says math is the gateway to reality and calls Stephen a bag of particles governed by the laws of physics. (05:58)

Next, the movie Mindwalk...

Mindwalk by Bernt Capra (1 hour and 52 minutes long)
A US politician (Sam Waterston) visits his poet friend (John Heard) in Mont. St. Michael, France. While walking through the medieval island discussing their philosophies of life they happen upon Sonja (Liv Ullman), a scientist in recluse, who joins in their conversation. The two men listen to the ideas of this brilliant woman and discuss how her ideas can work in their own politician and poet lives.


This movie explains the wave-particle duality nature of light and the quantum field better than any book I have ever read, including Frank Capra's "The Tao of Physics". It's similarity to Buddhist philosophy may be why I'm so comfortable with these ideas).

Here is a direction "scientists" can go in to study the nature of the QM field...

The Ancient Seekers discovered energy pathways called meridians which acupressure and acupuncture utilize. These "meridians" have also been mapped in great detail...

Meridians have also been found using an imaging technique...

Each time sodium pertechetate was injected into points of least electric resistance, its migration was observed constantly, approximately at 2.5 cms per minute and always following the same longitudinal pathway.

The characteristics of the migration rule out the possibility that the radioactive isotope was carried through the nerves, vessels or lymphatic system. For example, when it was injected in a vein underlying the point of least electrical resistance, transport of a different speed and pathway was observed. Additionally on injecting sodium pertechetate and thallium at the same time, it was observed that the first was transported while the second was not.

You can increase the extant of your 'aura' or 'energy field' around your body by doing deep regular breathing. Everybody has detectable energy fields which can be increased with deep diagrammatic breathing.

Here is an extract from an abstract reported on a government site. What was found: Emission of extremely strong magnetic fields from the head and whole body during oriental breathing exercises. “This article reports the result of an experiment that was designed to measure the biomagnetic field emanating from two individuals who were practicing traditional Oriental Qi Gong breathing exercises. It is concluded that traditional Oriental Qi Gong breathing appears to stimulate an unusually large biomagnetic field emission

Discovery of meridians described by Chinese acupuncture (abstract on a government site) “The “Bi-Digital O-Ring Test” imaging method has been successfully used not only to outline the internal organs but also malignant tumors as long as identical reference control tissue is available, regardless of whether it comes from the same individual or others, without exposing the patient to undesirable radiation from X-Rays, strong magnetic field or ultra-sound. While imaging the outline of the internal organs the author found that, from the surface of each organ, lines or networks of lines extend to other parts of the body. Such a line closely resembles well-known lines of meridians of major internal organs in Oriental medicine.”

An exploration of meridians (abstract on government site) “It is imperative to define the fundamental concepts of Qi, channels, and the meridian system of Chinese medicine in terms of scientific terminology before any meaningful and mutually beneficial dialog can begin between Chinese and Western medicine. In the Chinese theory, the meridian system as a whole is the system of the body. We propose the existence of a meridian regulatory system that governs interactions between and adjusts functions of internal organs, connects them to the body surface through a network of pathways (channels) and displays their status on the skin.”

From Time.com ACUPUNCTURE There is growing scientific evidence that acupuncture, a pillar of Chinese medicine, can relieve many kinds of pain, but there's no clear agreement about how it works. That was underscored by a German study of migraines: it found that inserting needles at various acupuncture points in the body relieved pain just as effectively as inserting them in the points that are supposed to affect migraines. Both therapies cut the number of episodes more than 50% over a 12-week period; a control group that did not receive either treatment continued to suffer as before.

Useful Book: The Body Electric: Electromagnetism And The Foundation Of Life


The Body Electric tells the fascinating story of our bioelectric selves. Robert O. Becker, a pioneer in the filed of regeneration and its relationship to electrical currents in living things, challenges the established mechanistic understanding of the body. He found clues to the healing process in the long-discarded theory that electricity is vital to life. But as exciting as Becker's discoveries are, pointing to the day when human limbs, spinal cords, and organs may be regenerated after they have been damaged, equally fascinating is the story of Becker's struggle to do such original work. The Body Electric explores new pathways in our understanding of evolution, acupuncture, psychic phenomena, and healing.