If you disagree with the prevailing view of the tea party and/or GOP/Republicans, that makes you a "Nazi". Summarized here:

The Socialism & Healthcare Nonsense In A Nutshell

1. Socialism by Robert Heilbroner (Article From Library of Economics): "Socialism—defined as a centrally planned economy in which the government controls all means of production" http://www.culturesocietyblog.com/2009/05/socialism-by-robert-heilbroner.html


3. Summary of "Socialism", Keynesian Economics & "Road to Serfdom" (by F.A.Hayek) 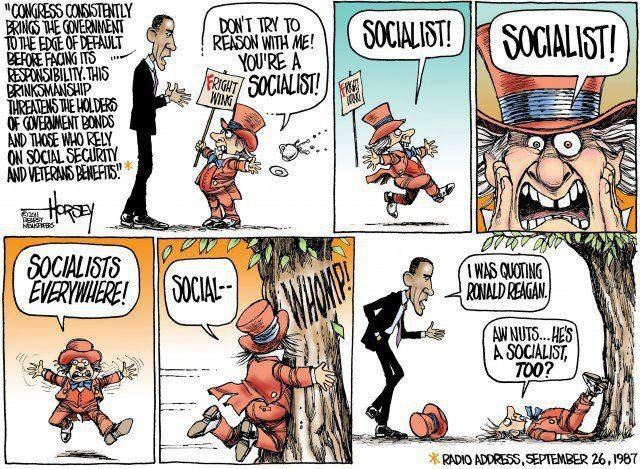 An example of how Reagan is continuously saying the opposite of what the Tea Party/GOP wants:


Socialism Explained is easy to understand comparisons with humor so it's easier to listen to here:


More on "Socialism" or FoxNews/GOP Hypocrisy:

Note: When an industry fails, if the Government bails it, get sit running again and then sells it back into private hands that is not part of some cartel  such as the ones below, then that is good economic policy. To take a dying industry and give it new life is what doctors do to patients and what economists are suppose do do to economies.


This is how the GOP works (they say one thing and do another - they speak fine words but have a record of doing the opposite or of lying and/or being proven wrong... to a degree that is mindblowing. That's why they have to push their cult with fear and authority (I explained mind control somewhere here) because if they learn to think for themselves it will be disastrous for them. A mob knows how to do only one thing. If they can't attack who they were designed for they will turn the other way:

Notice how sympathetic the pretty girls of Fox News are to lifeless corporations. "Oh! Look the poor corporations have a 35% tax rate! Poor Babies!". In reality all the corporations in the "ruling elite" of corporations (image listed below - link from Bill Moyers's website), get huge tax breaks so there REAL tax rate is often 0 or some other unholy number around that. It has been for many decades, reached it's climax under Bush in 2006. Fell in 2008.

Michael Moore says labor unions are on the ropes because wealthy people have done everything they can to destroy them.


VIDEO - From Bill Moyers David Stockman on Crony Capitalism - January 20, 2012 -  http://billmoyers.com/segment/david-stockman-on-crony-capitalism/  Moyers & Company explores the tight connection between Wall Street and the White House with David Stockman, former budget director for President Reagan. Now a businessman who says he was “taken to the woodshed” for telling the truth about the administration’s tax policies, Stockman speaks candidly with Bill Moyers about how money dominates politics, distorting free markets and endangering democracy. “As a result,” Stockman says, “we have neither capitalism nor democracy. We have crony capitalism.” Stockman shares details on how the courtship of politics and high finance have turned our economy into a private club that rewards the super-rich and corporations, leaving average Americans wondering how it could happen and who’s really in charge. “We now have an entitled class of Wall Street financiers and of corporate CEOs who believe the government is there to do… whatever it takes in order to keep the game going and their stock price moving upward,” Stockman tells Moyers.

The new form of communist/fascist/socialist government is actually crony capitalism and it looks like this...

The problem here is powerful, privately owned enterprises, who influence the nations wealth by having connections into the Government i.e. Crony Capitalism – [Visualized] http://www.thevisualeverything.com/2011/12/crony-capitalism-visualized/

More details on the right hand side of this blog.


Healthcare Nonsense In A Nutshell 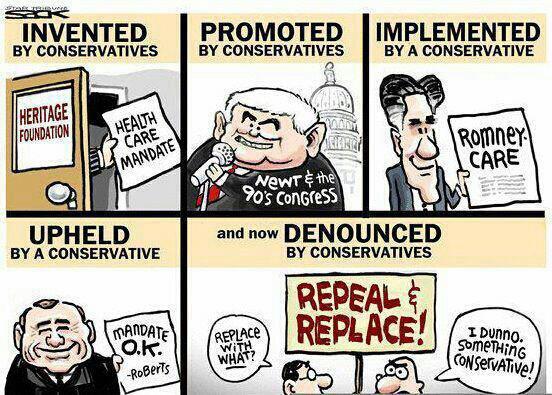 i.e. USA has a market based healthcare approach (good) made by crony capitalists (bad)


Obamacare, brought to you by Johnson & Johnson: When push comes to shove, corporate interests will always have the upper hand in determining public policy  (i.e. it was made by a corporation - A CAPITALIST! )
Obamacare architect heads to Big Pharma: Liz Fowler again exemplifies the blurred lines betweenthe healthcare industry and Washington

Big Pharma Allies: Cigna, Aetna, Blue Cross -- they're allies, not competitors, when it comes to stopping a public plan

Lobbyists: Their influence on Washington dates back to the days of Lincoln -- and it only seems to be growing