Archeologists can explain away anything! [Mysterious Evidence of Mommoths/Mastadons in America]

Recently National Geographic published an article on Gobekli Tepe and this got me wondering if I could prove that Archeologists are either so blinded by bias that they are incapable of considering evidence that goes against their beliefs (Such as the Judges in America who are sharply divided by ideology - As Jon Stewart points out, ‎"It's clear now, your politics shapes reality") OR simply don't read anything beyond their academic curriculum and their 'leaders' accepted sources of information. (You can consider this post as a part 1 in this analysis).

My first test was one of free speech. Which they passed with flying colors...

The following were my comments posted on National Geographic's facebook page:

Hi, I have been studying ancient structures for many years. To assume that this is a religious site... well, lets just say, it's a really big leap. There is no evidence to support that theory except the bias of the observer. If archeologist...s take all ancient structural evidence into account many other possible theories to the origin of these structures can be discussed. http://www.culturesocietyblog.com/2011/02/ancient-mysteries-worlds-earliest.html . Given the level of the ocean the structures in the link I've posted date to over 10,000 years ago. If you take this evidence into account it is possible that these structures are a monument to the dead of the previous civilization or a clear indication to future generations that a culture, sophisticated in the formation of stone monuments, did exist.

Note: the following is not bewildering if it is considered that the formation of these structures were by a people of a previous civilization who were, more or less, destroyed. In such a situation technological adeptness would decrease. (f...or example:If our civilization were destroyed how many of us could biuld a car or plane from scratch? Our technology and skills would wither til eventually we would forget all the knowledge we had previously aquired.) [Note: This has happened many times in recorded history as well, exmaple, the knowledge of the Greeks or the inheritance from the Muslims through the dark ages etc.] - "Bewilderingly, the people at Göbekli Tepe got steadily worse at temple building. The earliest rings are the biggest and most sophisticated, technically and artistically. As time went by, the pillars became smaller, simpler, and were mounted with less and less care. Finally the effort seems to have petered out altogether by 8200 B.C. Göbekli Tepe was all fall and no rise."

Ooops! The above comments were meant to go with this article: http://ngm.nationalgeographic.com/2011/06/gobekli-tepe/mann-text .

[These comments were a day ago and are still up there.]

In college a religion professor once mentioned in class (Professor Richman?) that in her day archeologists needed something called 'evidence' before coming up with theories. (She was referring to the female figures found that are assumed to be Goddesses). I also think it may have been her who gave me/us the example of future archeologists digging down to our time and discovering a bunch of Barbie dolls and concluding, based on these finds, that this was the Goddess of the early twentieth century.

Anyways, all of this was just to begin my analysis of how perception and lack of reading can affect the analysis (and therefore legitimacy) of the most highly qualified PhD holder in Archeology.

As Louis L'Amour explains at the end of his fictional book, Jubal Sackett (from his Sackett series) :

"Mammoth, Mastadon etc: According to scholars mammoths died out around 6000 B.C. Nonetheless, American Indians record hunting and killing them. One such report occurs in the Bureau of ethnology report The Ponca Tribe. Returning from their "long hunt" west to the Rockies, the Poncas saw a mammoth, as well as what was probably a giant ground sloth, near what is now Niobrara, Nebraska.


David Thompson, the distinguished Hudson's Bay Co. explorer, on January 7, 1811, came upon some tracks near the Athabasca River in the northern Rockies which the Indians told him were those of the mammoth. the Indians has assured him the animal was to found there. Many Indian tribes had accounts of seeing or hunting mammoth.


Near Moab, at Hys Bottom close to the Colorado River, there is a petroglyph of a mastadon. And in the Four Corners area Flora Vista a small boy found two slabs on which were carved many glyphs, including pictures of two elephants. They have been called fakes, which is the most convenient way of getting rid of something that does not fit current beliefs."

[Note: The best analysis of the Moab petroglyph (IMO) is here... and I can't find any information on the Flora Vista elephants/mammoths on any authoritative website.]

The following is the evidence that is currently available on this topic:

The scholars have changed the date to the extinction of the mammoths to 10,000 years ago (At the time of the writing of Jubal Sackett it was at 6000 years).

Here is a carving found on a mammoth bone (from the Smithsonian): 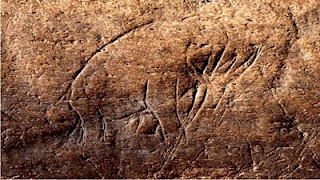 It was heavily mineralized, which prevented standard dating, Stanford explained. But mammoths and mastodons had died out in the Americas by 13,000 years ago, so it has to be older than that. "It could be quite early," he added.

Here is some more analysis of the Moab petroglyph:


Furthermore, according to Barnes and Pendleton, in their book Canyon Country Prehistoric Indians: Their Cultures, Ruins, Artifacts and Rock Art, there are two such "mammoths" in the Moab vicinity. One is a short distance down river from Moab Valley in the Colorado River Gorge (pictured). The other is in Indian Creek Canyon within sight of US 163 to the Needles district of Canyonlands National Park. There are interesting arguments on both sides of this historic-or-prehistoric controversy that centers on these two petroglyphs.

On the prehistoric side neither petroglyph appears to be recent. Both have desert varnish built up within the chipped out parts of the glyphs. Further it is widely accepted by anthropologists and paleontologists that early American Indians hunted such large animals as giant bison, mammoths and giant sloths, and may even have brought about their extinction.

On the historic side the two mammoth petroglyphs do not appear to be much older, if any, than the many other glyphs nearby, glyphs that are clearly associated with the most recent stages of prehistoric creatures that did not even exist 2000 years ago. Paleontologists estimate that mammoths became extinct on this continent about 10,000 years ago. Further the oldest rock are so far discovered that is age-dated by inference as 8700 years old is simply a fist-sized rock with scratches on it. To date, no rock are known to be older than about 1000 years old resembles the sophistication of design and techniques that was used in making these mammoths.

This find is my favorite... 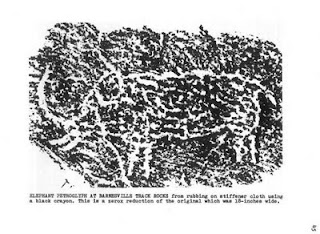 This petroglyph is so old and weathered that one can walk right by without noticing it, this is , unless the sun is shining just right. We are told that it stands out sharp in early morning or late afternoon sunlight. Evidently the lower angled rays of the sun produce better highlights and shadows on opposite walls of the peckings and enhance legibility. Unfortunately, our visit occurred about noon and even the photographs we took are hard to read. They proved to be unsuitable for reproduction but a rubbing taken on stiffener cloth with a black crayon was obviously an instant success. The original rubbing renders a petroglyph that is 18-inches wide.

How the memory of this animal came to the Track Rocks, we do not know. Either the engraving is so old that the artist was recording a mastodon or, more reasonably, it dates to a later period associated with ancient colonist from the Mediterranean who were famililar with the elephant.

Going along with the last assumption, it is interesting to note that the 1975 radio carbon dating of core samples from the Grave Creek Mound (less than 25 miles from the Track Rocks) gave a date of 200 BC for its construction. This corresponds well with the time period for the use of the Iberian-Punic script found on the tablet removed from the mound. The script also identifies people who were familiar with elephants and Carthaginians.

This Track Rocks petroglyph is not the first rendering of an elephant in America. There were many of reports of tablets, steles, petroglyphs, and sculptures depicting elephants. Wisconsin even records an enormous elephant effigy earthwork. Many of these were reported in the early 1800's, long before it was fashionable to deny the presence of ancient mariners on this continent prior to the coming of Christopher Columbus. [Note: 'fashion' may be just as much a part of modern science as it was in the past?]

Adding the above extract to the descriptions given by Native Americans that Louis L'Amour describes above and this concludes part 1 of my investigation into the legitimacy of University degrees in Modern Archeology (at least as far as theory goes, we do need some people to do those incredibly slow digs). Also, keep in mind that Canada has the largest cold land mass that is cut off from the 'old world', there is plenty of land and mountain valleys for herbivores to survive a long time in this up and down ice age of the last million years or so.  [Note: There are no links to the verbal accounts that Louis L'Amour describes because it would be much harder for me to find and is probably not even online - Also, to kill off the Indians, to take their land, they had to be discredited. The perception of Indians (Native Americans) as uneducated 'savages' (and therefore lacking observation skills) is still a view amongst many, especially in academic circles who pride themselves on their university taught archeological observation skills er... I mean blinders.]

Before modern settlers and Indians came to Oklahoma, the land was occupied by hunter-agriculture peoples. Near Anadarko, archeologists discovered the bones of a mammoth and several spear points. They estimate the mammoth was killed more than 11,000 years ago. The spear point was identified as belonging to an ancient group of hunters called the Clovis culture.

From 500 to 1300 AD, the Spiro Mound Builders lived in an area just west of the Arkansas/Oklahoma border. Items left in burial mounds show the Mound Builders to be skilled artists.

In the 1830s, the federal government forced the Five Civilized Tribes to leave their homelands. These tribes were living in the southeastern part of the U.S. They had to walk to Oklahoma over a trail that became known as the "Trail of Tears." Many men, women and children died during this long and treacherous trip. Once these people settled here, Oklahoma became Indian Territory.

On April 22, 1889, a cannon blast started the first Land Run. Settlers ran, rode on horseback or traveled in wagons to stake their land claims. By the end of the day, nearly 10,000 people had settled in Oklahoma City.
[Note: A great great great grandfather of mine was in on this land run - married a Cherokee, I think.]
Posted by Abe at 10:39 AM