Very little of our ocean floor has been explored. In the following video, from the Colbert Report, Richard Ballard talks about how much exploration is left to be done and why it is a good investment...

Cultures have sprung up fully developed (development process for a culture is said to take 3-4 thousand years) on the Indus River about 3000 BC. The cultures THEN declined. If these cities were on a shoreline that got inundated by the ocean that would explain how these cities popped up fully developed made of standardized clay bricks, with underground sewage, public bath-houses and an already established system of meditation that must have been a precursor to 'modern' yoga. (This civilization is called the "Indus Valley or Harrapan Civilization")

Since the cultures from which yoga may have come from popped up fully developed on the Indus and Saraswati rivers, where did these people come from?

According to the BBC, the earliest form of writing has been discovered in the Harrapan ruins found in an archeological dig in Pakistan. (picture below) 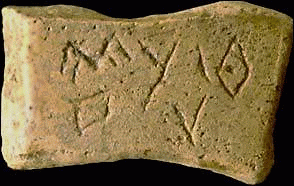 Video - The Legend Of Dwarka: An Indian Underwater City
This video covers some legends of an ancient city that was swallowed by the ocean and contains some underwater footage.

Deep in the waters of Cabo de San Antonio, off Cuba's coast, researchers are exploring unusual formations of smooth blocks, crests, and geometric shapes. The Canadian exploration company that discovered the formations, Advanced Digital Communications, has suggested that they could be the buildings and monuments of an early, unknown American civilization.

Many scientists are skeptical of any theory that might tempt people to draw a parallel with the fabled lost city of Atlantis. Geologist Manuel Iturralde, however, has stressed the need for an open mind while investigations of the site continue.

"These are extremely peculiar structures, and they have captured our imagination," said Iturralde, who is director of research at Cuba's Natural History Museum. Iturralde has studied countless underwater formations over the years, but said, "If I had to explain this geologically, I would have a hard time."

In his report on the formations, Iturralde noted that conclusive proof of man-made structures on the site could reinforce some oral traditions of the Maya and native Yucatecos. These people still retell ancient stories of an island inhabited by their ancestors that vanished beneath the waves.

Iturralde makes it clear, however, that just because no natural explanation is immediately apparent, it doesn't rule one out. "Nature is able to create some really unimaginable structures," he said.

Further research is scheduled to take place over the summer. Data thus far has been collected using sonar scans and video. The structures are buried under 1,900 to 2,500 feet (600 to 750 meters) of water.

There is also a report on Cuba's underwater ruins on BBC.

The Bimini road is a series of limestone rocks that go out into the sea. The standard belief is that they are natural formations but some people say that they are part of a man made harbor.

The most up to date refutation of that claim (that I can find) is located here.

A through investigation that refutes the above refutation (yes, I know it sounds funny) has been done by Greg Little called "Underwater Stone Formation At Bimini: Ancient Harbor Evidence" (since I got the pdf by email I uploaded it to my own Google account for easy access).

Best part of the Bimini structure is that it is easily explored by American divers and someone with time and money on their hands could do a deep sea survey of the general area and might find more structures buried underneath (deep sea sonar and satellite scanning is a way to get started). Although the PDF suggests a date around 9500BC, the type of stone structures found have been found in the Mediterranean as well. Thus this could be an ancient pier made when the ocean was lower during a mini ice age and not necessarily the big ice age 12000 years ago. The dominant theory is that it was a mid-way harbor to get to the underwater ruins of Cuba.


Underwater Ruins of Yonaguni Jima Off The Coast Of Japan

The strangest(and most convincing) of all underwater finds concerns the monuments of Yonaguni Jima discovered off the coast of Japan...which were hotly debated at one time but more and more evidence has been accumulating suggesting that the structures are actually man made(cut right into the bedrock like many other structures found).

Most alternative archeological researchers seem to believe that there was a technologically advanced civilization who built their structures in stone that existed at the end of the last ice age, when the sea levels were over a hundred feet lower than today. Since the biggest cities are always built on the coast, the place to look for ancient cities would be the levels at which the ocean used to be at before all the ice melted(approx 9500 BC).

However, even without taking such extreme dating ideas seriously we can see that there are definitely underwater ruins strewn all over the planet. Since the ocean levels are thought to have gone up and done with mini ice ages, it may be that we had civilization earlier than we thought just not as early as some like to believe.

Take a look at the following pictures of possible staircases and other structures that must be man made...(all pictures from The Morien Institute) 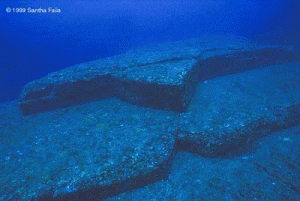 This structure is called 'The Turtle' 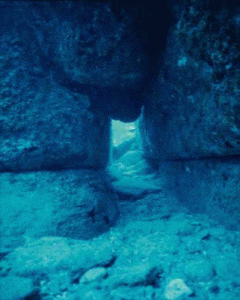 This structure consists of huge blocks of stone with a 'wedge' forming an arch. A common architecture design in ancient structures of Egypt and South America.

Triangular shaped structure - top view. Notice the gap between the stones. It looks like two stones chiseled and placed together. That is not a natural formation. 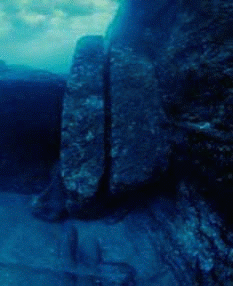 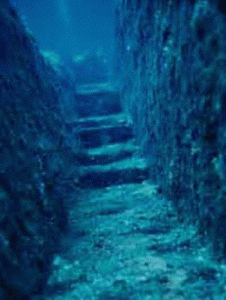 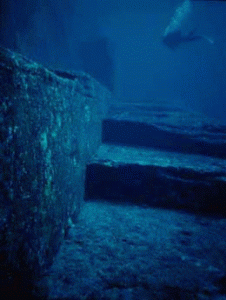 Another 2 steps a few feet from the short staircase above. 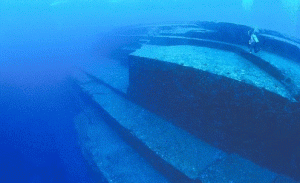 To get an idea of the scale of these structures...notice the diver?

"For example, Kimura said, he has identified quarry marks in the stone, rudimentary characters etched onto carved faces, and rocks sculpted into the likenesses of animals.

"The characters and animal monuments in the water, which I have been able to partially recover in my laboratory, suggest the culture comes from the Asian continent," he said.

"One example I have described as an underwater sphinx resembles a Chinese or ancient Okinawan king." Whoever created the city, most of it apparently sank in one of the huge seismic events that this part of the Pacific Rim is famous for, Kimura said.

The world's largest recorded tsunami struck Yonaguni Jima in April 1771 with an estimated height of more than 131 feet (40 meters), he noted, so such a fate might also have befallen the ancient civilization.

Kimura said he has identified ten structures off Yonaguni and a further five related structures off the main island of Okinawa. In total the ruins cover an area spanning 984 feet by 492 feet (300 meters by 150 meters).

The structures include the ruins of a castle, a triumphal arch, five temples, and at least one large stadium, all of which are connected by roads and water channels and are partly shielded by what could be huge retaining walls.

Kimura believes the ruins date back to at least 5,000 years, based on the dates of stalactites found inside underwater caves that he says sank with the city.

And structures similar to the ruins sitting on the nearby coast have yielded charcoal dated to 1,600 years ago-a possible indication of ancient human inhabitants, Kimura added.

Here is an abstract of a Japanese Study; Title;Research for submarine ruins off Yonaguni, Japan. Journal Title;Bulletin of the College of Science, University of the Ryukyus

Abstract;Submarine research surveys using SCUBA and sonic surveys reveal detailed topography similar to submarine, pyramidal features looking like a stepped pyramid off Yonaguni in Okinawa, Japan. The site is called Iseki Point(ruins site) as a leisure diving spot. Yonaguni Submarine Pyramid(YSP) is the major structure that stands under approximately 25 meters of ocean. Essentially, it has a cliff face like the side of a stepped pyramid, and dimensions of about 290m(length) by 120m(width) by 26m(height). Flat terraces, straight walls and its surface structure of walls with scars of tool marks driven in by a wedge on the structure are identified to be artificially fabricated. Appearance and size of YSP are similar to the biggest, ancient castles such as Shuri and Nakagusuku Castles in Okinawa Island, where they are called 'gusuku'. Roads associated with drainage canals were recognized, surrounding YSP, and that a retaining wall was found along a road. The southern point of the wall is composed of huge rock fragments. Stone tools and other artifacts were discovered from the sea bottom. Those evidence strongly shows that the YSP has not been manufactured by nature. It is identifie to be man-made. The formation age is estimated to be about 10,000 years ago based on 14C and 10Be age determinations. (author abst.)

The only difference between the Japanese scientific investigation and the one printed in National Geographic is the date ascribed to these structures. In National geographic the structures are 2000 years old and in the Japanese Scientific Study it has been dated to the last ice age (10,000 years ago).


Conclusion: Every time someone finds ruins underwater they immediately think they have found Atlantis. It is more likely that there are such ruins underwater all over the planet - especially the ancient coastline...there is still a lot of investigation that needs to be done. What we don't need to do is wonder if there are any more underwater structures. They keep turning up year after year, some in plain sight, so there are definitely more. A thorough exploration across the globe is called for (we have only explored 3-5 percent of the ocean floor, which means there is a lot of territory left to cover - which we can narrow down using data of sea levels to find where the ancient coastline used to be. That's where we should start looking for more underwater ruins).

I will look into some more ancient structures(on dry land) in later posts.
Posted by Abe at 5:35 PM