Scientific researchers have proven that the NIST lied and is continuing to lie (or are incompetent, i.e. some intern running the place seems likely), about how the third building fell on 9/11. Of course, if one building fell from demolition than that opens the door to the twin towers being possibility demolished. Its clear this would overturn our political establishment that supported the crimes against America and humanity conducted by the Bush Administration and supported by the GOP, Media and other political allies. The political establishment/government is clearly fighting to protect the lies it supports in its war on America and its constitution (which the GOP and its allies have probably won by now, killing truth forever).

AE911Truth.org: University Study Finds Fire Did Not Cause Building 7’s Collapse on 9/11

On March 25, 2020, researchers at the University of Alaska Fairbanks issued the final report of a four-year computer modeling study on the collapse of World Trade Center Building 7.The 47-story WTC 7 was the third skyscraper to be completely destroyed on September 11, 2001, collapsing rapidly and symmetrically into its footprint at 5:20 PM. Seven years later, investigators at the National Institute of Standards and Technology (NIST) concluded that WTC 7 was the first steel-framed high-rise ever to have collapsed solely as a result of normal office fires.Contrary to the conclusions of NIST, the UAF research team found that the collapse of WTC 7 on 9/11 was caused not by fires but by the near-simultaneous failure of every column in the building.Following the release of this report, AE911Truth and 10 family members of 9/11 victims submitted a formal request for correction to NIST’s report on WTC 7 based partially on the UAF findings. The request is currently pending.Downloads: Final Report | Abstract | Request for Correction

Study says the Building would have broken in half and fallen if the column faliure is as NIST said it would be:

What we actually saw, all columns collapse simultaneously as if dissolved by acid in seconds all at once;

Figure 4.17a Near-Simultaneous Failure of All Columns, Perspective 1

THUS WTC 7 DID NOT FALL FROM FIRE BUT FROM A COLLAPSE OF ALL STEEL BEAMS FOR NO SCIENTIFIC REASON! (if demolition is removed as a possibility as the NIST is required to do)

Here you see a modern steel and concrete building - up to code - fall from fire. Something that hasn't happened anywhere around the world for buildings with fire infinitely more intense than the one in WTC 7 on 9/11.

Compare the WTC 7 fire to buildings that were actually on fire, i.e. they had a real fire burning and didn't fall... WTC 7 is the image on the bottom right which fell from a tiny itty bitty fire (thats impossible no matter how much you want to believe otherwise); 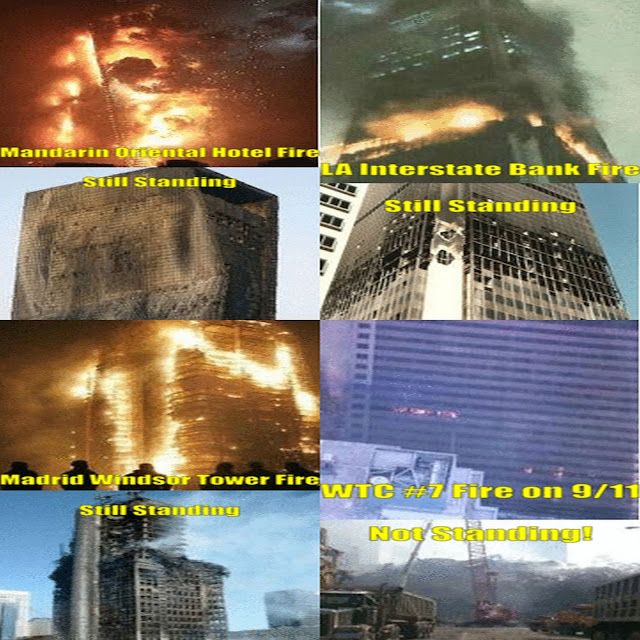