Incredible Animals: A Look At Elephant Intelligence (They Can Paint, Count, Communicate etc.)

Elephants have great memories, can count, can paint, enjoy music and even talk across long distances in sounds no human can hear and give warnings to each other through this method, i.e. they can communicate with sound over miles! This post compiles together some of the latest and greatest discoveries on Elephant Intelligence.

Science Daily: Asian elephants could be the math kings of the jungle Experimental evidence shows that Asian elephants possess numerical skills similar to those in humans 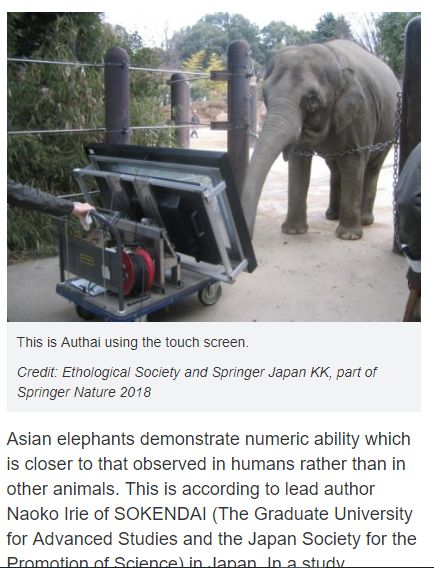 Researchers of the University of Turku, Finland, have studied a timber elephant population in Myanmar and discovered that Asian elephant personality manifests through three different factors. The personality factors identified by the researchers are Attentiveness, Sociability and Aggressiveness.
As is commonly known, people have different personalities, and the structure of human personality can be divided into five factors. Other species' behaviour also differs between individuals: some are braver, more social, or aggressive than others.
...
Life-histories of Humans and Elephants Resemble Each Other
The researchers studied the personality of over 250 timber elephants living in their natural habitat in Myanmar.
...
"Elephants and humans have many similar characteristics in their life-history and behaviour. Among other things, elephants have a very long lifespan and give birth to a single calf at a time, who in turn needs the care of the mother and other females for a long time after birth. Living in complex social environments could be a reason why both species have developed such complex personality structures," says researcher Mirkka Lahdenperä from the University of Turku, who participated in the study.
The study sheds more light on how personality develops in a long-lived, social species. This research on Asian elephants can also facilitate the protection of the species as well as improve the well-being and management of individuals in the timber elephant population in Myanmar.

In the current edition of Science, an international team of voice researchers and cognitive biologists led by Christian Herbst, Angela Stoeger and Tecumseh Fitch, provides new insights into the production of Elephant communication. The so-called "infrasounds," i.e. sounds with pitches below the range of human hearing, are found to be produced with the same physical mechanism as human speech or singing.
Elephants can communicate using very low frequency sounds, with pitches below the range of human hearing. These low-frequency sounds, termed "infrasounds," can travel several kilometers, and provide elephants with a "private" communication channel that plays an important role in elephants' complex social life. Their frequencies are as low as the lowest notes of a pipe organ.
...

"The ability of species such as elephants to learn and change their behavior means that genetic changes are not critical for them to adapt to a new environment," said lead author Alfred Roca, a professor of animal sciences and member of the Carl R. Woese Institute for Genomic Biology at the University of Illinois. "The behavioral changes can allow species to expand their range to novel marginal habitats that differ sharply from the core habitat.
...

"Our results and the historical record suggest that a high learning capacity and long distance migrations enabled Namibian elephants to shift their ranges to survive against high variability in climate and in hunting pressure," said first author Yasuko Ishida, a research scientist in animal sciences at Illinois.
The lack of genetic differentiation (aside from the Caprivi Strip) is consistent with historical evidence of elephant movements during the Namibian War of Independence, which increased hunting pressures. Using mtDNA, the researchers identified other Namibian elephant migration patterns; for example, elephants from the Ugab River catchment shared mtDNA with elephants from the Huab River catchment, from where they are said to have migrated.

Science Daily: First Evidence To Show Elephants, Like Humans, Apes And Dolphins, Recognize Themselves In Mirror Elephants have joined a small, elite group of species -- including humans, great apes and dolphins -- that have the ability to recognize themselves in the mirror, according to a new research finding. Mirror self-recognition in elephants, previously predicted due to their well-known social complexity, is thought to relate to empathetic tendencies and the ability to distinguish oneself from others, a characteristic that evolved independently in several branches of animals, including primates such as humans.

Science Daily: Elephants Tell Human Friends From Foes By Scent And Clothing Color
Elephants are remarkably perceptive when it comes to recognizing specific ethnic groups of people that vary in the degree of danger they are likely to pose. Elephants in Kenya reacted with greater fear when they detected the scent of garments previously worn by Maasai warriors than by Kamba men, the researchers reported.

Science Daily: Do elephants call 'human!'? Low rumble alarm call in response to the sound of human voices African elephants make a specific alarm call in response to the danger of humans, according to a new study of wild elephants in Kenya. Researchers carried out a series of audio experiments in which recordings of the voices of the Samburu, a local tribe from North Kenya, were played to resting elephants. The elephants quickly reacted, becoming more vigilant and running away from the sound whilst emitting a distinctive low rumble.

Science Daily: Elephants know what it means to point to something, no training required
When people want to direct the attention of others, they naturally do so by pointing, starting from a very young age. Now, researchers have shown that elephants spontaneously get the gist of human pointing and can use it as a cue for finding food. That's all the more impressive given that many great apes fail to understand pointing when it's done for them by human caretakers, the researchers say.

Science Daily: Do elephants call 'human!'? Low rumble alarm call in response to the sound of human voices 'Elephants appear to be able to manipulate their vocal tract (mouth, tongue, trunk and so on) to shape the sounds of their rumbles to make different alarm calls,' said Dr Lucy King of Save the Elephants and Oxford University who led the study with Dr Joseph Soltis, a bioacoustics expert from Disney's Animal Kingdom, and colleagues.

'We concede the possibility that these alarm calls are simply a by-product of elephants running away, that is, just an emotional response to the threat that other elephants pick up on,' Lucy tells me. 'On the other hand, we think it is also possible that the rumble alarms are akin to words in human language, and that elephants voluntarily and purposefully make those alarm calls to warn others about specific threats. Our research results here show that African elephant alarm calls can differentiate between two types of threat and reflect the level of urgency of that threat.'
Elephant 'human' alarm call rumble
Significantly, the reaction to the human alarm call included none of the head-shaking behaviour displayed by elephants hearing the bee alarm. When threatened by bees elephants shake their heads in an effort to knock the insects away as well as running -- despite their thick hides adult elephants can be stung around their eyes or up their trunks, whilst calves could potentially be killed by a swarm of stinging bees as they have yet to develop a thick protective skin.
Lucy explains: 'Interestingly, the acoustic analysis done by Joseph Soltis at his Disney laboratory showed that the difference between the ''bee alarm rumble'' and the ''human alarm rumble'' is the same as a vowel-change in human language, which can change the meaning of words (think of ''boo'' and ''bee''). Elephants use similar vowel-like changes in their rumbles to differentiate the type of threat they experience, and so give specific warnings to other elephants who can decipher the sounds.'

National Geographic: Under poaching pressure, elephants are evolving to lose their tusks In Mozambique, researchers are racing to understand the genetics of elephants born without tusks—and the consequences of the trait. 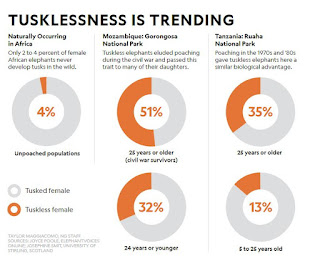 “If you look at Asian elephants, females don’t have tusks at all, and depending on which population you look at in which country, most males are also often tuskless,” Poole explains. Exactly why the Asian and African elephant populations have such different rates of tusklessness remains unexplained.
Yet Poole and others note that in areas in Asia that historically have been targeted for ivory hunts, tuskless levels are high—just as in Africa—underscoring that humans are leaving a lasting mark on Earth’s largest land mammal.

The softer side of elephants;


Watch a whole herd run to greet a new rescued baby elephant, "Dok Geaw", at Elephant Nature Park. Dok Geaw is one year and nine months old. He is an orphaned child...but it looks like he will not have too much trouble finding a new family.

When he plays his Native flute, this elephant starts dancing!
It is a fact that animals react to certain sounds, but showing emotions like human beings is rare. Watch how the elephants react when Michael Telapary plays his Native Flute. Incredible!

Bach on Piano for Blind Elephant
Lam Duan is the name of an old blind elephant, her name means “Tree with Yellow Flowers”. Lam Duan has been blind most of her life. Lamduan lives at Elephants World, Thailand. http://www.elephantsworld.org

Elephants Mourning - Just how aware are these elephants? Some scientists think they may cry when sad, just like humans.


Animal Planet- While drinking at a watering hole, this baby elephants becomes trapped in the water. A nearby pride of lions stands by, ready to take advantage of an easy meal, but another herd of elephants comes along just in time to save the day.

Elephants are the world's largest living animals and one of the most recognizable animals in the world! Big and gray, with big ears and long trunks, elephants are distinctive-looking creatures. Unfortunately, hunting and conflict with humans has endangered these intelligent mammals. Come learn more about elephants in this fun and kid-friendly video!