Media Makes Marco Rubio Seem Brave For Doing What The NRA Wants Him To! Clearly GOP Has Media Help In Managing Their Bloody Reputations For This "Gun Crisis"!

Background:
1. The Constitutional Argument To Ban AR-15 Type Weapons AND Clearly GOP & NRA Policy Positions & Actions Proves That Their INTENT Is Evil
2. NRA, Infowars, Fox News, Brietbart And Sinclair Function As A Terrorist Propaganda Wing Of The GOP That Seeks To Build Hate & Muddy The Waters (Kinda Like State TV)
3. To Understand The GOP Position On Guns Follow The Blood Money

Here you see media saying it takes guts to speak for your employer (a helping tactic mainstream media has a tendency to use for the GOP, for example covering for thier Iraq War lies as it makes them look bad, etc.)...


Context here is that one of the main and obvious solutions has been taken off the table by the guys giving them money and organizing political campaigns and votes (i.e NRA) so the Republicans are scrambling to do ANYTHING but what is right for thier constituents, i.e. bowing to bribers as that's what they truly stand for. This is a pattern that has repeated itself so many times that I still believe our high rating as a corrupt western nation is not high enough (I think they are leaving out media complicity in thier analysis thus making America seem less corrupt than it is despite being 16th on the list). 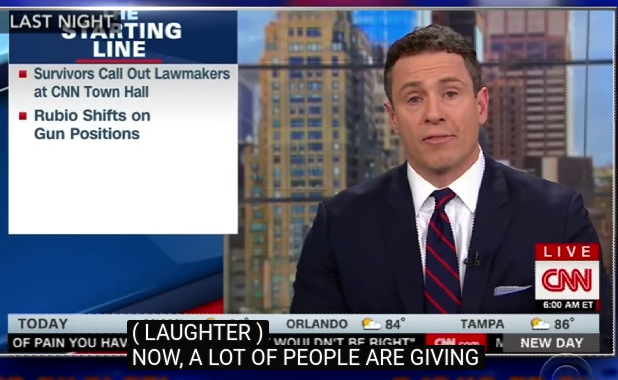 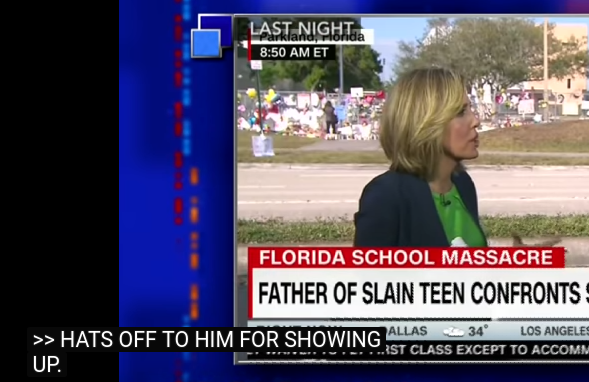 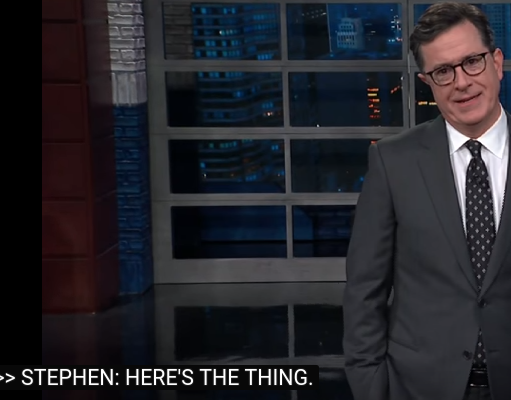 And that's a fact.

Basically what you see in this incident is that Marco Rubio gets credit for doing nothing brave but something greedy (or brave for the NRA, in which case you have to ask who the media is fighting for, a question I already know the answer to). Corporate media does alot for all GOP politicians and its "news" media.

New York Times: The True Source of the N.R.A.’s Clout: Mobilization, Not Donations


I think, given the context of the media helping the GOP with crimes for money (they get paid at thier jobs and they don't cover the whole truth PLUS they are nice to literal traitors) it makes sense to me that they would give Rubio credit for showing up. They show up everyday. They are in the same boat as Rubio or anyone else in the NRA or GOP. Bedfellows for life (unless the public changes the debate and forces them to do journalism... which is happening more and more often, the corporate media boards must be scared, I think). Notice;

CNN: "I was amazed today on the morning shows. I was on one of them and nothing, nothing," Sen. Jeff Flake, an Arizona Republican, told CNN this week, saying he wasn't asked about guns. "It's gone."

As long as an issue gets ratings it gets coverage (providing it doesn't hurt the GOP too much) but they like to act like they are just reacting to issues like they are in shock. "OMG! I can't believe people want to talk about the "I" word", the word impeachment, that is the Constitution this country was founded on, is what they are referring to. "I guess now the people have decided this is important"... or after years of homophobic media that has been decreasing overtime, "look,! the people are suddenly see gay people as people!" or, "Oh! Look! Someone said the 'T' word!", referring to another word from the Constitution that's apparently off limits to "journalists". And so on the nonsense goes that is network and cable "news".

Survivor to Rubio: Will you reject NRA money?


At 2:32 Marco Rubio says that the influence of these groups doesn't come from money but its following of millions of people who agree with the agenda - he leaves out the conservative echo chamber and the cash that goes into funding it  (& him, both from same sources) and thus this can be considered to be an outright lie.

At 3:16 Marco Rubio says, 'in the name of 17 people killed he will support any law that would stop a killer like that,', i.e. he side stepped the problem of mass shootings in society to focus it on this SPECIFIC shooting situation thus he can pass some law (that should already have been there) to try and get out of this political mess. In other words, every move he makes is a political tactic designed to keep his corrupt system and masters happy. If he raises the age limit for guns he can say "Hey, that 19 year old couldn't have shot you guys up until he was 21 and angrier". Though they would leave out the negative possible reaction or limitations on this law as they are trying to appease the people and help thier donors and this law solves both problems at one.

At 3:27 The kid mentions that he could get the exact money to Marco Rubio that the NRA gives him which shows he lacks the understanding of how interconnected the GOP, Fox News and NRA really are. The NRA helps Marco Rubio fight off Democrats in elections with thier adds and activist base. They do that for every GOP Republican. The NRA does talking points which EVERY Republican politician copies and spreads so the authority of having so many politicians and groups saying the same thing (despite it being a lie) has a powerful effect on politics and helps them win elections. $2000-10000 in donations from the NRA is just icing on the cake. Its the whole network that they rely on. In toher words, the NRA can make or break a politician (as they claim to do) and right wing politicians are just too corrupt to say no (not that corruption isn't part of the system now).

At 3:45 Marco Rubio doesn't mention how many of these lobbying groups (where 'both sides get their money from') actually write laws for these supposed law makers that are pretending to help the people (the constituent argument is an old con of the Republicans, i.e. they say they will do what is best for the situation or people or problem but they actually do whats best for their pocket books while pretending to do right or upkeep their reputations. Democrats pass laws for corporations over the people all the time as well, i.e. the ones that benefit the most are the corporations and the ones that are hurt the most are the people, its just how they do politics/business)

Then Marco Rubio parrots a law that Trump wanted to pass making it seem like he is disagreeing with the NRA (he will do what he is told to do in the end). Just a liar like all Republican politicians. And this is not an exaggeration.

All media helps with this obfuscation of the truth.

Notes: Marco Rubio starts using an argument that works for the NRA and conservative media; 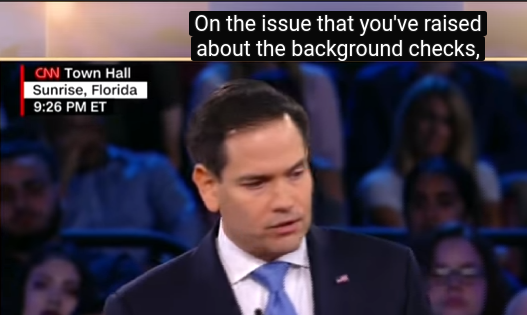 Marco Rubio is basically saying that its possible for criminals to get guns with all the loopholes the NRA has put in over the years and he would literally have to ban all semi-automatic rifles which NRA would never allow, so he can't do it.

Audience starts clapping not getting that Rubio was trying to explain why he can't stop people from dying in major mass shootings with war machines. So Rubio does a dodge; 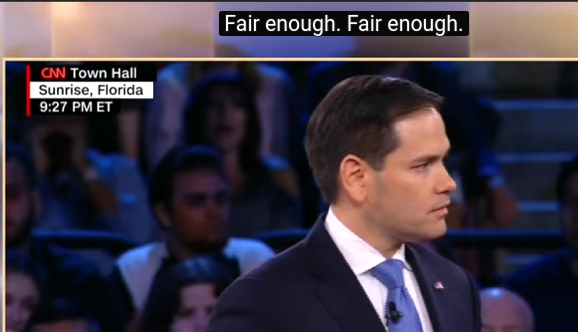 Now he will come up with a law to pretend prevent that SPECIFIC incident. In fact, I think that's what the Florida legislature may have done recently except for the fact that guns are allowed to cross State borders by Federal law which means an 18 year old could buy a gun out of State, including bump stocks, and bring it in to shoot up a school or whatever.