Background:
1. Geologists Agree That The Sphinx Has Rain Erosion Patterns On It Indicating It Was Built Before 5000 BC! 2500 Years BEFORE Mainstream Egyptologists Claim It Was Built!
2. Breaking News: Using Archeoastronomy The Pyramid Complex At Giza In Egypt Has Been Dated To 10,500 BC
3. Tracing Lost Megalithic Cultures From 9500 BC To The Present

Many Megalithic sites are built up over time and given Egypt's central location and the uniformity of mythological structure over time (example 1 - example 2 - example 3) it makes sense that the Egyptian Pyramid/Sphinx complex was built up over a period of time, in stages.

What we find with the Giza pyramid complex is two interesting anomalies.

The first is that if you align the site to the sky, as many megalithic cultures seem to be doing, then we end up with a START for the Giza site at 10,500 BC.

The second is that in the pyramids themselves we find shafts through which stars can be seen, aligned to the year approx 2,450 BC... so did the Giza plateau site start in 10500 BC with a Sphinx (previously a lion, which would fit my thesis that the Egyptian culture developed from a Shamanic culture AND correspond to the type of symbology the hunter-shamanic society at Gobekli Tepe were using - more details later) and get to it's present built state by around 2500 BC? Evidence certainly seems to suggest so.


Note: The Sphinx Was Probably Originally A Lion

What I found most interesting is that the Sphinx seems to have been originally sculpted into a lion and then re-sculpted by a later civilization (the Pharaonic one) AFTER water and time had weathered the structure to such a degree that many of the lions head features were probably already gone. 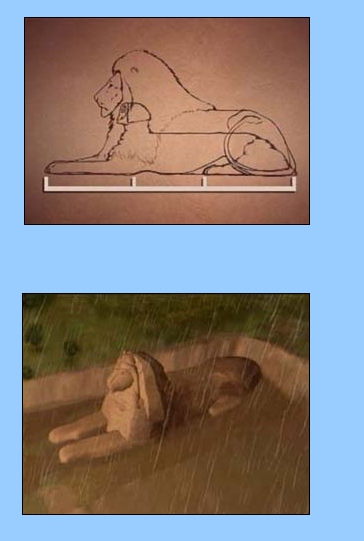 Some Megalithic sites have been built up and expanded over time. Could the Pyramid complex at Giza Egypt be one of them? And does the age of 10,500 BC (approx) represent the beginning of a millennium long fascination with stars and stones in some, if not all, of the Megalithic Cultures?

The following are megalithic sites that have been built up over time (often with thousands of years separating first construction to last construction... it's like adding a new wing to the Vatican in Rome... it only happens rarely and after long periods of time) 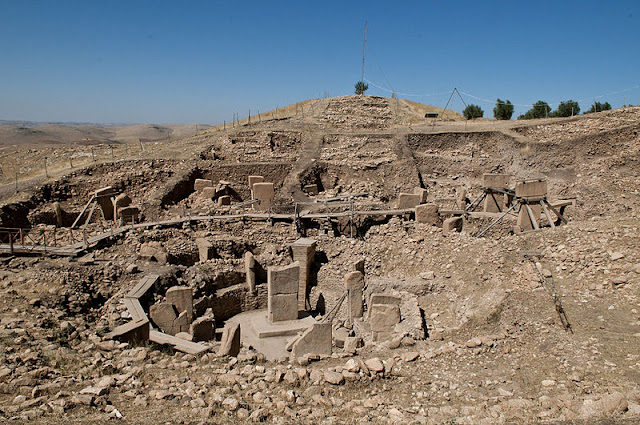 Wikipedia: Göbekli Tepe, "Potbelly Hill" in Turkish, is an archaeological site atop a mountain ridge in the Southeastern Anatolia Region of modern-day Turkey, approximately 12 km (7 mi) northeast of the city of Şanlıurfa. The tell has a height of 15 m (49 ft) and is about 300 m (980 ft) in diameter. It is approximately 760 m (2,490 ft) above sea level. The tell includes two phases of ritual use dating back to the 10th–8th millennium BCE. During the first phase, pre-pottery Neolithic A (PPNA), circles of massive T-shaped stone pillars were erected, the world's oldest known megaliths. More than 200 pillars in about 20 circles are currently known through geophysical surveys. Each pillar has a height of up to 6 m (20 ft) and a weight of up to 20 tons. They are fitted into sockets that were hewn out of the bedrock. In the second phase, Pre-Pottery Neolithic B (PPNB), the erected pillars are smaller and stood in rectangular rooms, also with floors of polished lime. The site was abandoned after the PPNB-period. Younger structures date to classical times. The details of the structure's function remain a mystery. It was excavated by a German archaeological team under the direction of Klaus Schmidt from 1996 until his death in 2014; Schmidt believed that the sites were early neolithic sanctuaries used as a holy site and not used as a settlement. 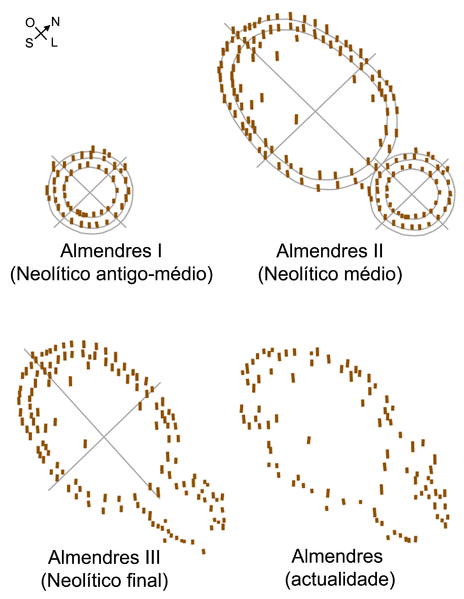 Wikipedia: The construction of these structures date back to the 6th millennium BC, though they were only rediscovered in 1966 by Henrique Leonor Pina, who was proceeding with field work relating to the country's geological charts The excavation of the site unearthed a series of both megalithic and neolithic construction phases; Almendres I 6000 BC (Early Neolithic), Almendres II 5000 BC (Middle Neolithic), Almendres III 4000 BC (Late Neolithic). The relative chronology of the cromlech and menhirs is extremely complex and covers a period from the Neolithic to Chalcolithic, and it is believed that the monument had a religious/ceremonial purpose, or functioned as a primitive astronomical observatory.


Stonehenge may actually show signs of a culture transitioning from wood to stone (underlined below)... as cultures as supposed to do, i.e. the earliest star observatories must have been marked in wood - such as poles and tree trucks - which have long since rotten away and disspeared. Following the natural development of culture, stone comes AFTER a long period of development in wood (for example, before the car came the wooden, horse drawn cart. Before the metal plane came the wooden plane and before the metal boat came the wooden boat and so on), so, all megalithic cultures CAN be seen as later developments in the region which we have been able to track archaeologically because they reached the stage of using stone but the system itself was already part of the culture.

Archaeologists believe it was constructed from 3000 BC to 2000 BC. The surrounding circular earth bank and ditch, which constitute the earliest phase of the monument, have been dated to about 3100 BC. Radiocarbon dating suggests that the first bluestones were raised between 2400 and 2200 BC, although they may have been at the site as early as 3000 BC.

Before the monument (8000 BC forward)

Archaeologists have found four, or possibly five, large Mesolithic postholes (one may have been a natural tree throw), which date to around 8000 BC, beneath the nearby modern tourist car-park. These held pine posts around 0.75 metres (2 ft 6 in) in diameter, which were erected and eventually rotted in situ. Three of the posts (and possibly four) were in an east-west alignment which may have had ritual significance; no parallels are known from Britain at the time but similar sites have been found in Scandinavia. A settlement that may have been contemporaneous with the posts has been found at Blick Mead, a reliable year round spring 1 mile (1.6 km) from Stonehenge. Salisbury Plain was then still wooded but 4,000 years later, during the earlier Neolithic, people built a causewayed enclosure at Robin Hood's Ball and long barrow tombs in the surrounding landscape. In approximately 3500 BC, a Stonehenge Cursus was built 700 metres (2,300 ft) north of the site as the first farmers began to clear the trees and develop the area. A number of other adjacent stone and wooden structures and burial mounds, previously overlooked, may date as far back as 4000 BC. Charcoal from the ‘Blick Mead’ camp 2.4 kilometres (1.5 mi) from Stonehenge (near the Vespasian's Camp site) has been dated to 4000 BC. The University of Buckingham's Humanities Research Institute believes that the community who built Stonehenge lived here over a period of several millennia, making it potentially "one of the pivotal places in the history of the Stonehenge landscape."

The Stonehenge site: Holes that no longer, or never, contained stones are shown as open circles. Stones visible today are shown coloured 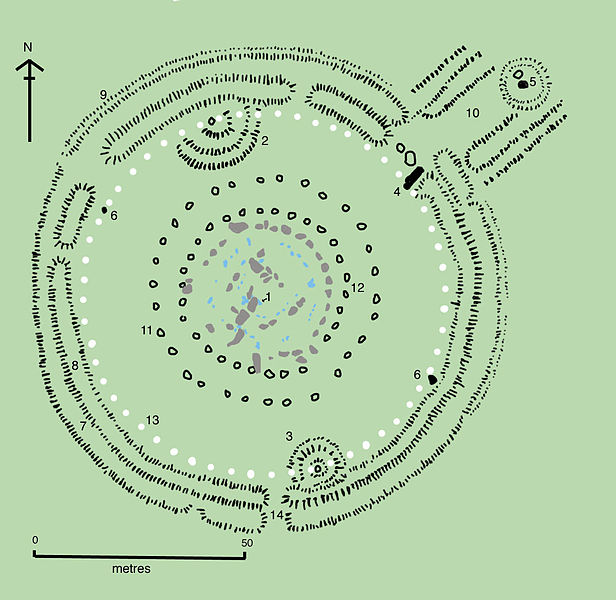 Here is the astronomical alignment of the Giza Plateau according to Robert Bauval in the first time (i.e. when the site was first developed, probably with the building of the Sphinx in some form or another), dating the SITE of the Giza Plateau to 10,500 BC.

Robert Bauval: THE GREAT SPHINX IN THE AGE OF LEO?

What makes the Sphinx-Leo correlation of 10,500 BC unlikely to be a coincidence is that it ‘works’ in conjuction with the ‘beginning’ of the Prececessional cycle of Orion’s belt as seen in the southern sky, which can be matched on the ground with the Giza Pyramids. This ‘beginning’ I have identified to the golden age that the ancients called Zep Tepi meaning the First Time (of creation). 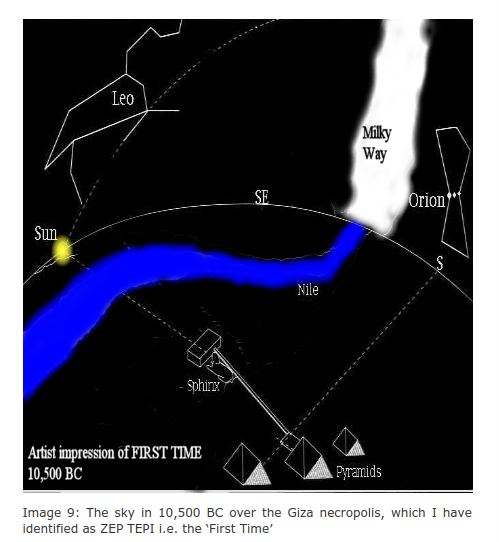 Egyptologists are generally opposed to the idea that the ancient Egyptians identified the constellation of Leo to a lion. However Richard H. Wilkinson, professor of Egyptology at the University of Arizona, and an expert on Egyptian deities, wrote: “An important mythological aspect of the solar god in the heaven is found in his identity as a a cosmic lion as seen in Chapter 62 of the Book of the Dead, for example, which states that ‘I am he who crosses the sky, I am the lion of Re…’ The stellar constellation now known as Leo was also recognized by the Egyptians as being in the form of a recumbent lion… the constellation was directly associated to the sun god.” Wilkinson H., Richard. The Complete Gods and Goddesses of Ancient Egypt, 2003, p.206]

The Orion Mystery (1994) p. 270-1: "In previous articles it was shown that the two southern shafts pointed to Orion's belt and Sirius...the two northern shafts were directed to the pole star, Alpha Draconis, and to the head of Ursa Minor (Kochab).... All these alignments work for the same precessed epoch of c. 2450 BC plus or minus 25 years."