Daily Show Links Trump & Oberlin College (Because Of Me) :-)

OK. Maybe the Daily Show has noticed that Trump has got some ideas from my blogs. I went to Oberlin College, have it on my .Org and Trump has been using ideas from there, i.e. ... 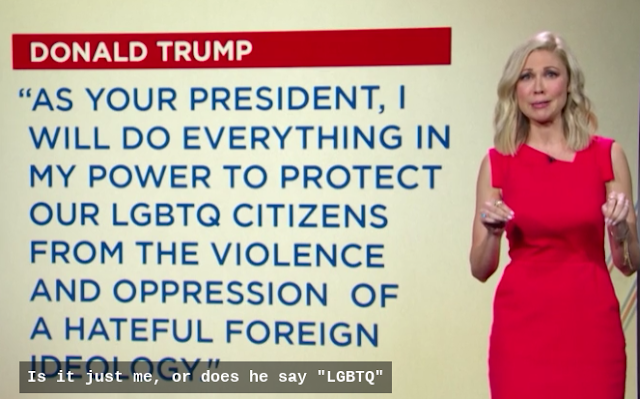 Trump used my .org's idea on cutting the education department (before backlash) which is 1 of 5 departments that I am willing to remove as explained at LiberalLibertarianism.org (still got 4, or possibly 3 departments to go). He also seems to have read my intro to Republicanism (which is true Republicanism). Besides that there are the correlations to "Lyin Ted" (His nickname though I defined Ted first - or was it this one? - but Trump person may have just got that from Ted since he does lie alot. There is also the correlation to 'Ted is from Canada' thing which is PERFECT for right wing politics so I had to go there). There were some other things that I noticed but forgot about.

It's not that big a deal. I went to his facebook page pretty much right after he jumped in the race and told him the Republicans just wanted a rich white man to lead them and not to worry about the other crap people say. Basically. (I was with Ron Paul in 2012 so I already knew how things worked). Overtime I was the only "pundit" to be proven right on more than one occasion (media can't get things right if they don't use facts because their buyers don't like the facts) so it's understandable that Trump would trust my blog as a source but there is still much selling to do if he becomes President. Which brings me to the next point.

I don't understand why Trump acting "appropriate" to some arbitrary custom matters so much. People who acted appropriately, such as Bush, started the Iraq War. Maybe it's time we stopped electing random people without lie detector tests and giving them such absolute power? Trump will certainly be criticized and watched like a hawk. That would be a first. That said Trump can't stick with the proper path because he doesn't know it.

Imagine a President who COULDN'T go behind our backs and fund mass genocide in South America on a whim because the media doesn't trust him (the source of modern immigration problem, btw).

Imagine a President who doesn't have the freedom to push deregulation of the financial industry based on the mad ramblings of a fiction writer.

Imagine a President who couldn't get away with ill 4000+ US Citizens to make money off of oil while using fear mongering or, outright coverups through media complicity, to hide the truth.

Imagine a President who doesn't have the trust of the people to pull off another 9/11. (or in an elite enough position to have classified info).

Maybe we don't need someone who can act appropriately and can be trusted with highly classified state secrets that put so many lives in danger and scare the media to the point of uselessness?

I mean, just take a look at what the CIA director said; 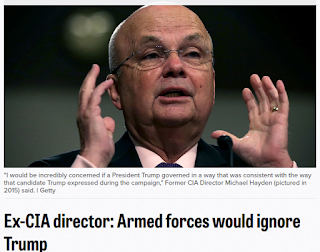 Former CIA Director Michael Hayden blasted Donald Trump's rhetoric in a recent interview, saying that the U.S. military would refuse orders from him, even as commander-in-chief, to kill the families of terrorists, as Trump has pledged to do.

Appearing on HBO's "Real Time with Bill Maher" to promote his latest book, Hayden expressed concern about Trump's language, including the Manhattan real-estate magnate's vow to bring back waterboarding and worse because "they deserve it."
Read more: http://www.politico.com/blogs/2016-gop-primary-live-updates-and-results/2016/02/cia-director-armed-forces-ignore-trump-219918#ixzz4G3jGigtP Follow us: @politico on Twitter | Politico on Facebook

I've documented tons of unconstitutional behavior by the army EVEN if I leave out the Iraq War (a war that killed Citizens for oil i.e. a war under false pretenses is a crime in a country where there is law that an army is sworn to protect). Till now the army just didn't care BUT with Trump the CIA director is saying they will stop their years of unconstitutional activities ... that a fantastic deal! Imagine not having to worry about the army blowing up NY to keep the war on terror going without question or some crap like that. Yes, the establishment will do well for the general population (except for the ones they kill to continue their agenda) but do we really want such a dangerous Government where we elect random crazy people to absolute power where everything they do is classified? Yes, it's in the National Security Act of 1947 but it isn't in the Constitution and I think the reason for that is obvious. You can't have a government of 'we the people' if the people at the top are not transparent & accountable for all their actions. It's just not possible.

Anyways, what I'm particularly proud of (if there isn't too big of a public backlash that can't be dealt with in debate)...

Cutting the education department (what I'm pushing on LiberalLibertarianism.org... it's been updated since but the 5 departments are still the same since it's based of Ron Paul 2012 campaign but with Liberal proofs);

Trump: I will reduce taxes and take on Wall StreetApr. 21, 2016 - 9:09 - Presidential candidate talks Hillary Clinton's judgment, the role of federal government and his tax plan on 'Hannity' 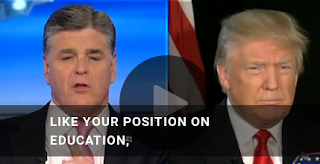 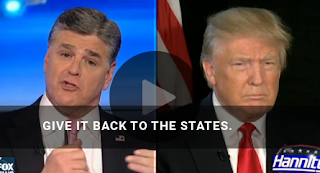 Note: I wrote this before Trump became all buddy buddy with Paul Ryan. GOP economics is a death sentence to ANY economy. The fact that the media even allows the GOP to peddle this malarky as an actual scientific alternative to misinformed citizens is beyond comment at this point. Trump's best option was to go anti-establishment. I really hope he was threatened in one of those classified briefings by the army cause if he wasn't then he simply can't be trusted to even not do what the GOP did, i.e. mislead the country into war, killing 4000 soldiers, for, what clearly turned out to be a campaign for securing our oil supply through companies our fearless leaders could get some payback for thier efforts. The media helped cover it up with it's "fog of war" narrative. So, basically, we know Hillary is going to kill innocent in other people for sure (it's a Kissinger tradition). Now we know it's likely Trump will simply do what the craziest person says for as long as he can make it work and then it's gone. So, America has nothing left but lies.
Posted by Abe at 1:06 PM

Email ThisBlogThis!Share to TwitterShare to FacebookShare to Pinterest
Labels: Trump uses stuff from my blogs (or did till now)