Bush-Cheney (The 9/11 Team) To Scalia & The Kochs. The Connections, From Politics To Money, Can't Be Clearer... What's Alex Jones Up to? Why Is He Always Helping The GOP?


Recently Scalia died. Wasn't given an autopsy (despite him being only 79 & showed no signs of illness, i.e. he went to a pleasure ranch) and then everything went crazy. Alex Jones, for example, seems intent on defending that pro-9/11 terrorism Justice! The GOP's tactic is more sensitive, i.e. continue with their disruption and distortion campaign against the United States & it's Citizens.

First, a few words by Dick Cheney on Scalia's death;

Now, Scalia is a well known supporter of Bush. He helped Bush gain the Presidency through an interesting case of voter fraud, i.e. by suspending the vote altogether with months to go before inauguration time.

Bush & Cheney then laid out a plan for the Iraq War. Outlined in this post: 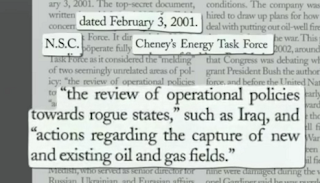 Bush & Cheney then "got warnings of a possible attack by the CIA, er, I mean Osama". 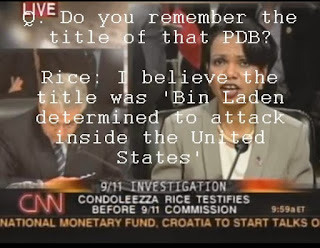 Then Bush & Cheney "accidentally" became incompetent and let 9/11 happen. OR they were simply incompetent and useless in protecting the nation without a clearly defined threat on thier doorstep. Of course, memos not being enough, if current GOP/Fox coverage is to be deciphered.


Scalia's relationship with the Bush's, of course, continued;

Salon: Scalia told me a secret about George W. Bush When we had dinner several years ago, I asked the justice about the Bushes. His answer might surprise you

“Justice Scalia, as we’re coming to the end of Bush’s presidency, I wondered if I could ask your opinion on the president’s leadership qualities.”
I recall Justice Scalia leaned back a little and examined my face. He may have thought I was a plant. Nonetheless, he was completely candid. “I have the utmost respect for the Bush family,” he said. “And I’m not a politician or a political figure. But a lot of my fellow Republicans think the other Bush brother is much brighter. That the wrong Bush brother became president.” There in the Gladstone Room of the historic Oxford Union, Justice Scalia indicated that he shared this opinion.
lash forward to today: Jeb’s presidential campaign is on life support. It’s clear he does not have his brother’s political or interpersonal instincts. But I have a strong suspicion that Jeb would have had Justice Scalia’s support.
I had practiced my second question several times so that I could get it out easily. “Justice Scalia, if there’s one decision you would like reversed from your tenure on the Court, what would that be?”

He didn’t hesitate. “McConnell,” he said, referring to McConnell v. FEC. The case upheld the constitutionality of the Bipartisan Campaign Reform Act of 2002. The BCRA, more commonly called the McCain-Feingold Act, had put in place certain campaign finance rules for corporate and union spending in elections. The Court in 2003 upheld those reforms, and Justice Scalia issued a blistering dissent. As we drank sherry in Oxford, Justice Scalia employed one of his classic hyperboles. “If you’re not free to use money in the political process, then the First Amendment is dead.”

Jeb Bush, brother of George Bush, had this to say about Scalia's help post 9/11; 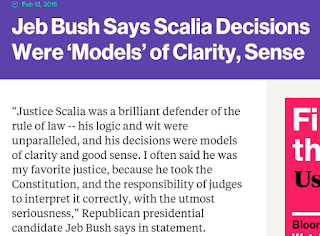 Alex Jones, who I had initially believed to be a person who knows "the truth about 9/11", has been blaming Scalia's death on Obama and saying Ron Paul was next. A contention that is so crazy that I have to unwrap that a bit.

At approx 2 min: Alex Jones starts saying 'hey I'm a kook, well, a NYC cop wants to look into Scalia's death'. Well, if a NYC cop is saying "look into it" then what he is doing is reporting the news. i.e. not having an autopsy of the sudden death of s Supreme Court Justice while on vacation SHOULD spawn conspiracy theories. Though I would like to point out that a conspiracy theory is only a conspiracy theory as long as one can prove it with science. Then it's just a coverup. Alex Jones does conspiracy theories and one of the happens to be REPORTING on OTHER PEOPLE's study of 9/11. Some people report this news and some don't.

Alex Jones then goes on to talk about this death as if it is very important in the grand scheme of things.

Then he brags about "contacts" we are supposed to take his word for making it seem more like he may simply be a con man i.e. a traitor who uses people to make money. He is a traitor because he intentionally muddies the truth. That said, maybe the guy is just a crazy idiot. In which case this analysis doesn't matter.

Then Alex Jones brags about his 'High level government contacts' again. The Government that killed Scalia or did 9/11 or is there some other Government.


Esquire adds to this picture;


But we don't really get into the Scalia business—which did have some sketchy details—until a bit later:

"I wish it was natural causes, but my gut tells me no. If this is an assassination, it signifies that they're dropping the hammer. That's the canary in the coal mine...My gut tells me they killed him and all the intellectual evidence lays it out."

Jones explains this is just the latest in a long line of suspicious deaths, including Andrew Breitbart, and that anyone who has ever spoken out against the Obama administration could be next. "Maybe they'll kill Ron Paul. Maybe they'll kill Donald Trump next," he said, also alluding to the idea Justice Clarence Thomas, another conservative on the Court, could have one of these suspicious "heart attacks."

So what is the logic here Alex Jones?


Obama found out about 9/11 and is out killing people who helped commit that act, which you yourself admit that they did?

Scalia was feeling bad about what he did to the country by electing Bush President and hiding the truth of 9/11 (being a person who was close to Bush & in on the ground floor of 9/11) and the architects of 9/11 found out. Given that the cash flow from the Koch's to Jeb Bush, brother of the 9/11 terrorist, is a documented fact and Jeb Bush has to keep his hands clean for the election... who is left but the Koch brothers as the likely culprits of the possible murder of Justice Scalia (given the assumption that this was definitely a murder of some sort and now we have to find the money & political trail to some big crime)

Info wars points out that Obama is skipping Scalia funeral... given Scalia's connection to 9/11. isn't that a good thing?


When I noticed that Alex Jones took other people's research about 9/11 and then attached his name to it... followed by a passionate support for the GOP (party that actually DID 9/11) I began studying this freak. I also began studying what these 9/11 researchers were saying and I discovered that after I removed the toxic and psychotic "Alex Jones" element I could piece together an evidential picture that is really quite thought provoking. I think once Alex Jones puts his name behind something he can consequently cover up any truth involved with what he's covering and end up spreading lies. I'm still at loss to explain how he could be against Scalia's death if he is against the 9/11 coverup. It's like he's purposely trying to mislead people while pretending to be helping them by covering the truth.

Here is the result of my own personal research into the events of 9/11 and the research done on it since then;
The investigation I've done so far;


And frankly, I don't care if all of the the people involved in the 9/11 actions and it's coverup drop dead of heart attacks. I'm sure the CIA, or whoever, made an upgrade of their 70's heart attack weapon;

People who have died from heart attacks include William Reich (whose books were burned by the SUpreme Court in the 1950s) and an interviewee from the BBC documentary on Tower 7 from 9/11. When he was recalled for a confirming interview he acted weird and soon died of a heart attack;

The official NIST report says that there were no evidence of explosions and cites no witnesses to the noise as evidence. Look up 'explosions 9/11' on www.YouTube.com and you will find tons of evidence, however most of the people may not be qualified to evaluate if they heard an explosion. This doesn't apply to Barry Jennings though, the following video are clips from his testimony...Barry Jennings died under mysterious circumstances before his interviwers were done interviewing him. You can learn more about him from a blog devoted to him;Extract: "The significance of the Barry Jennings mystery is that his personal story as recounted on video leads to the conclusion that the destruction of the towers on 9/11 was planned. No cause of death has been made public, and the mainstream press has not even covered the death of this American hero."
Is that why Alex Jones is helping the GOP all the time? Fear of getting killed over 9/11?

Why would the Koch brothers be spreading thie rwealth amougnst ALL GOP candidates - INCLUDING JEB BUSH, George Bush's' Brother & Cheney's Friend - unless they are the leaders of the GOP? 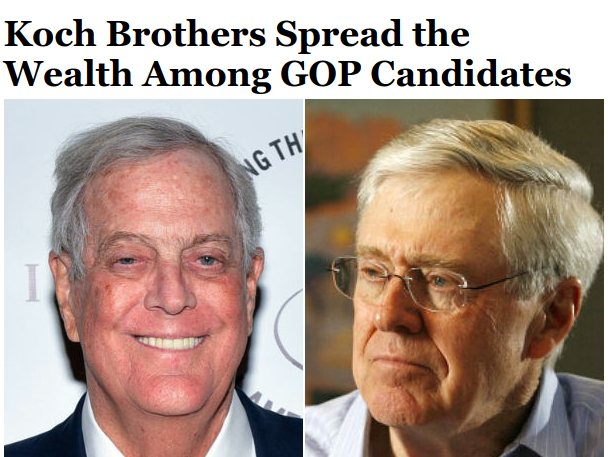 Slant:
Bush is scheduled to speak at a Koch sponsored event in August and he was on the Koch Brothers’ favorite GOP candidates list, but he has said he is not “auditioning” for any Koch Brother bids for his presidential race. He has also condemned the current campaign spending practices.


Koch, his brother David and their team have identified five candidates who have the right message and "a good chance of getting elected," he told USA TODAY in an exclusive interview at Koch Industries' headquarters. They are Wisconsin Gov. , former Florida governor  and Sens.  of Texas,  of Kentucky and Marco Rubio of Florida.
"Those are the ones we have talked to the most and who seem to be the possible leaders," he said.


Extract from Popular Mechanic:Spurred by conspiracy theorists' questions, investigators did look specifically at the possibility that explosives were involved. "Hypothetical blast events did not play a role in the collapse of WTC 7," the report states, adding that investigators "found no evidence whose explanation required invocation of a blast event." Moreover, the smallest charge capable of initiating column failure "would have resulted in a sound level of 130 dB [decibels] to 140 dB at a distance of at least half a mile." Witnesses did not report hearing such a loud noise, nor is one audible on recordings of the collapse.