Hillary held a very strong Republican view towards gays for most her her career, i.e. she was anti-gay rights, despite the Constitution's Bill Of Rights. It was her husband that signed the very Republican sounding Defense Of Marriage - DOMA - act (which, of course, he regrets). They were successful in protecting marriage from gay people so they clearly became very close to Republicans. Well, at least some of them. (I sometimes wonder if 'moving to the center' is something the rich people who own media came up with to gain consensus to push their own agenda through and then started acting like is was a real rule... like they seem to do with "news" even today)

As is the pattern of the Clinton's, they make bad decisions and then they change positions and act like they made the right decision all along. Unless they are left with no choice but to apologize because what they did is just so bad that they have no choice. They have made some good decisions on the small scale (& the Democrat base is immune to religious economics... so there is a limit to what they can pull off there... not that they aren't able to, just takes more work). Since Democrats follow polls and Republicans create them, some of this may simply be coincidence.


Here is Hillary Clinton Against & For Gay Rights (Interestingly enough she's calling it a 'Constitutional right' now. Took her decades to figure that out. Definitely not a plus for her decision making skills):

Hillary Clinton didn't refrain from supporting same-sex marriage for political reasons—before last year, she earnestly believed that marriage equality should be denied to gays and lesbians. That's the story the 66-year-old Democrat settled on when NPR host Terry Gross pressed her on her views. The admission is easily the most significant in the interview with the former senator, secretary of State, and presidential candidate, though much of the subsequent media attention has focused on the perception that there was a "heated exchange" where Clinton "lashed out" at her interviewer.* The mild tension stemmed from persistent questioning as Clinton obfuscated on an issue that could damage her chances in a 2016 primary but is relatively unlikely to hurt her in a contest against a Republican, given that her coalition is so much stronger on gay rights than the opposition.
In a primary, Clinton could be forced to explain a longtime position that a significant part of that Democratic political coalition now views as suspect or even bigoted. Most famously, the Silicon Valley left forced the ouster of Mozilla CEO Brendan Eich for a 2008 donation he made to an anti-gay-marriage ballot initiative. That same year, Clinton ran for president while openly opposing gay marriage. If she is to be believed, she also opposed gay marriage as recently as 2013, long after a majority of Americans already held a more gay-friendly position. Would the subset of Democrats who thought 2008 opposition to gay marriage should prevent a man from becoming CEO in 2013 really support the 2015 presidential campaign of a woman who openly opposed gay marriage until last year?


Washington (CNN): As recently as a year ago, Hillary Clinton was sparring with a public radio host about her position on same-sex marriage, defending her past reticence to discuss the issue and falling well short of full-throated support. Now, in a markedly new position, Clinton is offering just that, calling gay marriage a right afforded by the Constitution.
"Hillary Clinton supports marriage equality and hopes the Supreme Court will come down on the side of same-sex couples being guaranteed that constitutional right," said Adrienne Elrod, a Clinton spokeswoman, in a statement.
This is an entirely new position for Clinton.
READ: Hillary Clinton's gender tightrope
As a candidate in 2008, Clinton opposed same-sex marriage, supporting the idea of civil unions instead. She did not proclaim her personal support for same-sex marriage until 2013, after she left her diplomatic position as secretary of state. 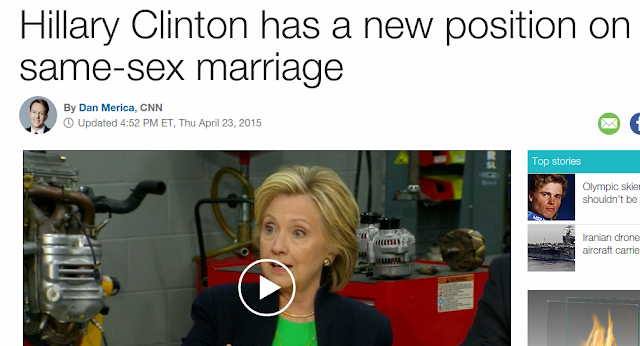 
On the day that the U.S. Supreme Court was poised to hear oral arguments about same-sex marriage April 28, Hillary Clinton changed her "H" logo to rainbow-colored and tweeted: "Every loving couple & family deserves to be recognized & treated equally under the law across our nation. #LoveMustWin #LoveCantWait."
Clinton came out in support of same-sex marriage in 2013 after more than a decade of opposing it. But her views are particularly in the spotlight now that she is apresidential candidate.
We decided to put Clinton’s statements about same-sex marriage on our Flip-O-Meter, which measures whether a candidate has changed their views without making a value judgment about such flips. We found that as public opinion shifted toward support for same-sex marriage, so did Clinton.