Height of Hypocrisy: Jeb Bush Declares He Is His Own Man While Signing Up With Dick Cheney's Team (The Invasion Of Iran Is Already Decided If He Wins)


Jeb Bush signs up with most of the Bush Administrations team like Romney did before him. Clearly, Jeb Bush is the anointed one.


Jeb Bush: ‘I am my own man’: Jeb Bush took the first big step to the White House today by distancing himself from his father’s and brother’s presidencies. Kasie Hunt, Steve Kornacki, and George Pataki join the Hardball discussion.

Jeb Bush may be his “own man,” as he declared Wednesday in his inaugural foreign-policy speech as a putative presidential candidate. But to hear GOP insiders describe it, the former Florida governor is pulling together his foreign-policy team with a distinctive Bush-family recipe in mind, adding a strong dash of 43 (his hawkish brother) to a sprinkling of 41 (his moderate dad), mainly to make himself more palatable to mistrustful and still-mostly-hawkish GOP primary base voters.

Bush’s advisory team is being pulled together by two mainstream Republican foreign-policy experts who served both his father and his brother, Richard Haass and Robert Zoellick. They have enlisted not only old GOP lions like James Baker—who first served under Gerald Ford, then Ronald Reagan and distinguished himself as George H.W. Bush’s secretary of State—but also neoconservatives such as Iraq war advocate Paul Wolfowitz and John Hannah, Dick Cheney’s former national security advisor.
Read more: http://www.politico.com/magazine/story/2015/02/jeb-bush-foreign-policy-115295.html#ixzz3SjbNYRIW


A reminder of what the Bush Administration was like;


Guantanamo torture report prompts look at interrogator's police work - Spencer Ackerman, national security editor for The Guardian, talks with Rachel Maddow about reports of torture at Guantanamo by a former police detective, and the new scrutiny being applied to the criminal confessions obtained by the detective in Chicago.


In depth on Dick Cheney;


Something we didn't hear much about... 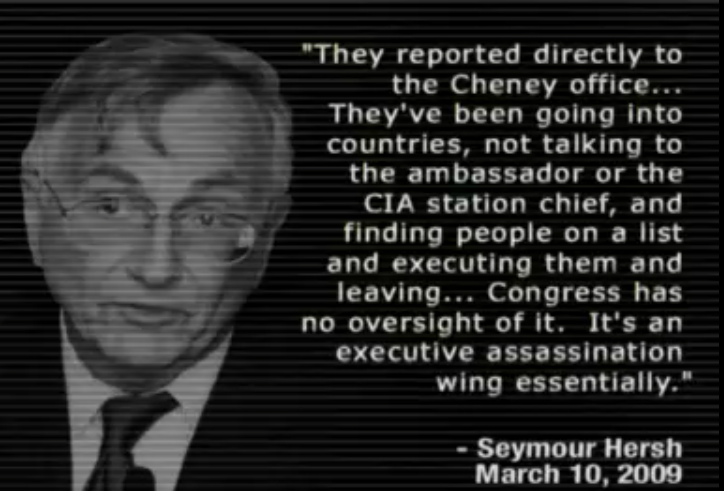 The Future: The Invasion Of Iran Has Already Been Decided (If Jeb Bush Wins)...


Indecision 2012 - Romspringa - Republican voters go through a rite of passage wherein they desperately explore every possible option before ultimately and unhappily voting for Mitt Romney. (3:27):


People who they disagree with get a media cover-up...

The media consistently treats Ron Paul like 'he is the thirteenth floor in a hotel', yet he is the one that planted the grassroots that the establishment republicans are benefiting from now. Why is that? [Note: The media anchors all following a similar script has been dubbed 'echo chamber' and is written about here and here. ]

"Let the record show that on January 16, 2012, the good people of South Carolina booed the Golden Rule." ― Jon Stewart...