Wealthstock & Insurance: ViceThe world's wealthiest individuals descend on Davos, Switzerland, for the World Economic Forum, and the insurer MetLife denies that it has grown too big to fail. (8:14) 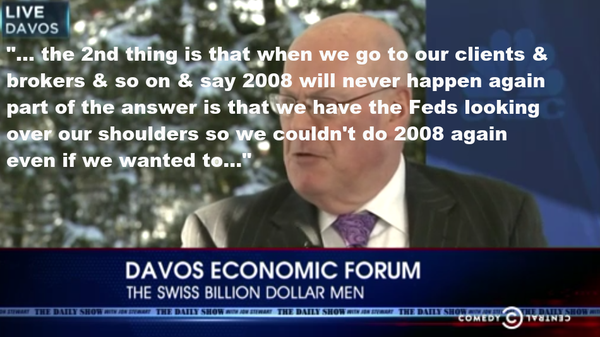 
Note: 3 mins and 30 secs - Says 'we didn't realize housing doesn't go up forever' yet the excuse for the derivatives housing nonsense (triple AAA rated toxic assets) is 'this is the normal financial crises that occurs every 5-7 years'.


How the companies got the ratings they needed to pull their scams:

Rise of the Planet of the AAs - The U.S. gets downgraded, so financial institutions are flushing their money out of stocks like s**t from a caffeinated goose. (8:23)

At 2 mins - "These are the guys who gave AAA ratings to mortgages that were toxic" (about Standard and Poor).

A Bloomberg report reveals that the U.S. government loaned banks $7.7 trillion in secret bailout funds at no interest and then borrowed the money back at interest.


'Basically the banks were being lent money at no interest (by the government) and then the government was borrowing it back and giving interest!' What a sweet deal!... Why is the US so low on the corruption charts? Who makes these charts?

A Bloomberg report: Reveals that the U.S. government loaned banks $7.7 trillion in secret bailout funds at no interest and then borrowed the money back at interest!!!!


Summary of the 2008 financial crash which sounds eirrely like a scam which was covered up by the Government!

Notes:
1. 2 institutions owned 50% of the mortgage market.
2. Not backed by capital
3. Double dealing with wall street and congress - Mentality: Boom and Bust - Trying to score big off a gamble, very casino movie kinda game play.
4. "Profits get privatized and losses get socialized"
5. Over-subsidy on housing also presented people to own half an 'American Dream' (the other half being hard work to deserve what you get) - Combined with a shrinking public sector job market and consolidation of private firms into conglomerates (reducing private sector job market)- squeezed the job market on two sides.
6. Useful to prevent companies from becoming 'too big to fail' in the first place.