Gingrich ex-wife claims he sought 'open' relationship, candidate won't say 'anything negative': Marianne Gingrich, the former speaker's second wife, also alleged that her ex-husband conducted his affair "in my bedroom in our apartment in Washington."

Visit NBCNews.com for breaking news, world news, and news about the economy

John Oliver reports from Charleston, SC, on how Newt Gingrich can use his second ex-wife's open-marriage bombshell to his advantage


'He's using his audacity (hypocrisy) as a positive for negotiating in Washington"!

In other words, Newt Gingrich is a liar...

Newt is the sort who continually lies when the truth would work better. Now these aren’t big lies, and most are inconsequential. Meaningless really. But it says something about Newt, the man. It goes to character. It speaks to why Newt can spend his entire political career supporting socialist ideas, standing with socialists like Hillary Clinton, Nancy Pelosi, Al Gore, and many more. It’s how he can support their agenda, at the exact time Conservatives are trying to stop it, and then look you right in the eye and claim he just wanted to be part of the conversation.

In a November 2000 forum on policy in Science, Gingrich advocated for more government investment in scientific research and technology. In his essay, he specifically highlighted the need to allocate more money for climate research to the National Oceanic and Atmospheric Administration. He lamented that NOAA is "so strapped for money" that it could barely keep its basic programs running, let alone make major new investments in cutting-edge research.

This sentiment sets Gingrich apart from the current batch of Republicans in Congress, who have long been after NOAA and made the agency's climate work their prime target.


Notice how he used his political position to make money and help a corporation...


(c) Freddie Mac required action within it's specified "timeframes and will include such other information related to the Services as Freddie Mac may request." i.e. You gotta tell us whatever we want to know (that's what the contract says!)

Romney's False Attack: Newt was a lobbyist for Freddie Mac.

The Truth: Newt has never engaged in lobbying, period. Newt made a decision after resigning that he would never be a lobbyist so that nobody would ever question the genuine nature of his advice and  perspectives.

At no time did Gingrich lobby for Freddie Mac, or for any client, and neither did anyone in Gingrich’s firm. This prohibition against lobbying was made clear to all Gingrich Group clients. Nor did Gingrich ever advocate against pending legislation affecting Freddie Mac, as some articles have incorrectly alleged. In fact, recent reporting from Bloomberg News on the Gingrich Group’s consulting services for Freddie Mac confirms that Gingrich and his firm were not paid to lobby and that Gingrich never acted as an advocate to stop any legislation or regulation affecting Freddie Mac.


What Mitt Romney said was (extract from here)...

Mitt Romney says Gingrich was a consultant (approx 15 seconds into the video on this link). Look at the information above... it's obvious the part about being a "historian" is an outright lie. Newt replies, "I offered strategic advice" and then goes on a rant to confuse his voters so they could think he's right.

Mitt said Gingrich was a CONSULTANT. What Newt did was re-frame (or rephrase) it so that he would technically be speaking the truth (i.e. he was hired as a consultant NOT as lobbyist)

Here is an extract from Newt Gingrich's contract...

Notice that Corporate interests(i.e. Freddie Mac) come before the people (unless a waiver is given!) [Click Here To Read More]

During Monday night's Republican debate in South Carolina, former House Speaker Newt Gingrich continued to promote his controversial strategy to fight both child poverty and the jobs crisis: New York City janitors who make "an absurd amount of money" should be fired and replaced by poor schoolchildren, he said.

"You could take one janitor and hire 30-some kids to work in the school for the price of one janitor," Gingrich said. "And those 30 kids would be a lot less likely to drop out. They would actually have money in their pocket."

In South Carolina, Gingrich didn't define an "absurd amount of money," but earlier this month he said, incorrectly, that an entry-level janitor gets paid twice as much as an entry-level teacher. Not only do Gingrich's calculations assume janitors earn much more than they actually do, his theory is deeply flawed, and would likely harm impoverished communities, not help them, researchers say.

The top salary for a New York City public school cleaner -- who generally does the type of work that Gingrich imagines schoolchildren might do -- is $37,710, or $18.13 an hour, according to the Service Employees International Union, which represents all 5,000 janitors. Divided among 30 kids, that would be some $1,257 a year, or a little over $24 a week. Meanwhile, the starting salary for a first-year teacher with no advanced degree is $45,530, more than a cleaner.

It's true that some workers classified as janitors make a decent living (by New York City standards): Custodial engineers in the New York City public school system can earn a top salary of $114,000 a year, but they start around $56,000 a year, and they work as supervisors -- not "entry-level" janitors. Along with supervising other custodians, their job responsibilities include repairing heating and electrical equipment and inspecting buildings. The work requires a high school diploma, or equivalent, along with years of experience, according to the New York City Department of Education.

Either way, if any of those janitorial positions were filled by schoolchildren, labor experts point out, the U.S. would have one less decently paying job.


"Wyatt Cenac analyzes why it took Newt Gingrich so long to be condescending and dickish to African Americans."

WASHINGTON (AP) — Republican presidential candidate Newt Gingrich said Thursday he is willing to go before the NAACP and urge blacks to demand paychecks, not food stamps.

Gingrich told a town hall meeting at a senior center in Plymouth, N.H., that if the NAACP invites him to its annual convention this year, he'd go there and talk about "why the African-American community should demand paychecks and not be satisfied with food stamps."

Gingrich routinely lambasts President Barack Obama as the "best food stamp president in American history." He also has spoken previously about welcoming an invitation from the NAACP to speak and has been critical of GOP candidates who have not accepted such an invitation.

The National Association for the Advancement of Colored People had no immediate comment on Gingrich's remarks. His campaign spokesman, R.C. Hammond, said the former Georgia congressman has often said the GOP needs to be inclusive of all Americans.

"He has said since he became a presidential candidate that any Republican should always accept an invitation to speak to the NAACP on any topic," Hammond said.

Those are the white people, and the good ones (the good ones are the black people that Newt isn’t talking about. You know, the exceptions to the rule). Why the difference? You think it’s because of skin color, but it’s not. As Newt has explained, time and again, it’s because black people haven’t learned how to work. That sounds racist, but he’s not saying they can’t work, or don’t want to work, but that America (and more specifically, liberals) haven’t taught them how to work. Newt’s a historian, remember, and black people do have a history of disproportionate poverty and unemployment that white people don’t.

My fellow liberals attacked Newt Gingrich when he made a series of factual observations about black children, and the example their parents set for them. First, he sensibly recommended that 9-12 year-old children in “poor neighborhoods” (you know what that means, right? “Urban?”) should clean toilets so they would learn to “show up on Monday.”


Newt For President in capsule form... 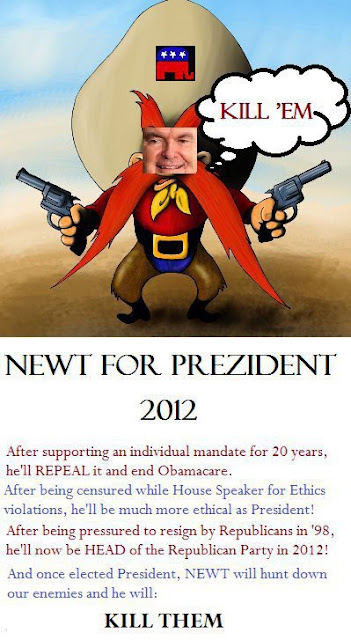