From The BBC: Services have been held in Japan to mark the devastating earthquake and tsunami that struck two years ago.

Ceremonies took place in the three worst-hit prefectures and a minute's silence was observed at 14:46 (05:46 GMT), when the quake hit.

More than 18,000 people were left dead or missing in the disaster, which also caused the Fukushima nuclear crisis.

Since then, most of Japan's nuclear reactors have remained off, amid impassioned debate over nuclear energy.

At a service of remembrance in Tokyo, Japanese Emperor Akihito spoke in praise of the survivors and relatives of the dead.

"I am always deeply moved by seeing how so many people lead their daily lives without complaining," he said. "[I hope] to be able to share their suffering, if only a little."

"Japan will never experience a true spring if spring does not come to north-eastern Japan. I promise never to forget the weight of each day and promise to speed up the reconstruction of the region," he said.

"I will make Japan a country resilient to disasters while standing on the side of people who were affected."

Two years have gone by and Joseph Campbell's observation on the Japanese people has stood the test of time, yet again:

Japan has just gone through one of the worst disasters in modern history. The earthquake was so big that it increased the rate of our planets spin and the tsunami that followed was watched all over the world Live as it swept away cars and buildings.


New: The Earthquake Was Heard In Space: The great Tohoku earthquake in Japan two years ago was so big its effects were even felt at the edge of space. Scientists say the Magnitude 9.0 tremor on 11 March 2011 sent a ripple of sound through the atmosphere that was picked up by the Goce satellite.Its super-sensitive instrumentation was able to detect the disturbance as it passed through the thin wisps of air still present 255km above the Earth. The observation is reported in the journal Geophysical Research Letters. It has long been recognised that major quakes will generate very low-frequency acoustic waves, or infrasound - a type of deep rumble at frequencies below those discernible to the human ear. But no spacecraft in orbit has had the capability to record them, until now.


BBC Video: Two years after Japan's Fukushima power plant was torn apart by an earthquake and tsunami, it remains one of the most contaminated places on earth. Radiation inside the plant is at dangerous levels. The clear-up operation, which runs into billions of dollars, could take another 40 years. Rupert Wingfield-Hayes describes the complex preparation process for the 3,000 clear-up workers before visiting the contaminated area.

BBC Video: On 11 March 2011 an earthquake and tsunami killed more than 15,000 people in Japan.
It also caused a meltdown at the Fukushima nuclear plant, which left the region severely contaminated and forced more than 160,000 residents to leave their homes. It was the worst nuclear disaster since Chernobyl in 1986. Rupert Wingfield-Hayes reports from the contamination zone, where a clean-up operation is still under way.

BBC Report: It would be reassuring to think that the world's worst nuclear disaster since Chernobyl is contained, and the Fukushima Daiichi nuclear power plant is in stable shut-down.

Unfortunately a look inside the Fukushima plant suggests otherwise.

I was part of a group taken in to the Fukushima plant last week, only the second time foreign TV journalists have been allowed in since the disaster two year ago. Very little that we saw in our brief two-hour tour was reassuring.

Our first stop was reactor building number four. This place was potentially the most worrying.
Inside the shattered building, more than 1,500 spent fuel rods were still sitting inside a cooling pool. They were still highly radioactive and the pool was outside the reactor's steel and concrete containment vessel, perched high on the third floor.

Around 3,000 workers are still trying to clean up the site

A race is now on to get the fuel rods out. A huge steel structure is being erected around building four that will be used to raise the spent fuel out.

But that operation will not start until the end of this year, and will then take two more years to complete. If another large earthquake strikes during that time there is real concern the building could collapse.
Tepco, the company that runs the plant, told us the building was now strong enough to withstand another quake. But contractors who

& Decentralize energy, making it easily available for the individual (no nuclear energy, ever)... 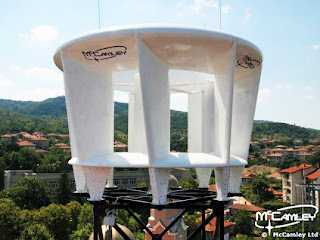 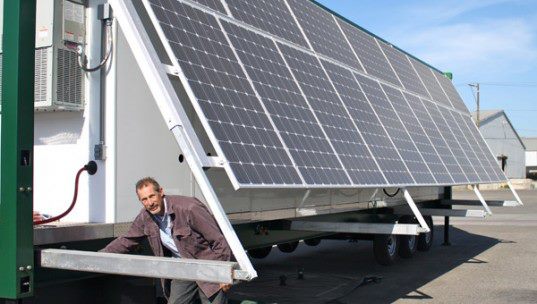 
An example of living on solar power in Pakistan (with no power costs, life become simpler and it's easier to start your own business or keep communications/TV going without a centralized power source/station)... [From CNN International]


A wave power developer has said tests of a device off Scotland's coast exceeded expectations... 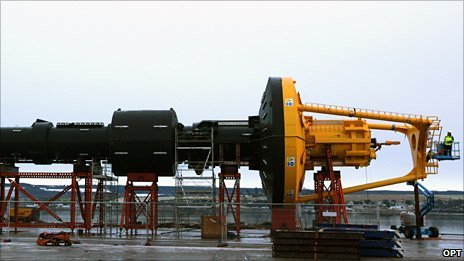