GOP have now established a verifiable tradition of defying the Constitution and lying with intent to obstruct justice or deceive the people. The latest post just adds to the growing evidence that the GOP are not following BASIC precedent concerning Obstruction of Justice established from the Nixon impeachment by the Congress of that era. In other words, they are in clear violation of their oaths of office by not impeaching Trump for obstruction of justice AND the emoluments clause. The Russia collusion thing is a separate issue altogether. GOP are traitors and they prove it everyday (more links to proof below).

Lawrence: This should be an article of impeachment Lawrence shows how President Trump's latest tweets attacking Mueller match the actions that members of Congress voted to impeach Nixon over in 1974. Fmr. Watergate prosecutor Jill Wine-Banks, Harry Litman and David Corn discuss the latest in the investigation, including a report on Mueller's endgame. Duration: 21:18

Trump is clearly trying to influence and silence witnesses! 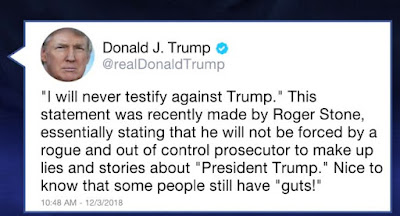 Trump tweets that are obviously in violation of impeachment precedent for obstruction of justice being ignored by the GOP congress, i.e. Trump is obviously trying to influence false testimony;

“I will never testify against Trump.” This statement was recently made by Roger Stone, essentially stating that he will not be forced by a rogue and out of control prosecutor to make up lies and stories about “President Trump.” Nice to know that some people still have “guts!”
— Donald J. Trump (@realDonaldTrump) December 3, 2018


“Michael Cohen asks judge for no Prison Time.” You mean he can do all of the TERRIBLE, unrelated to Trump, things having to do with fraud, big loans, Taxis, etc., and not serve a long prison term? He makes up stories to get a GREAT & ALREADY reduced deal for himself, and get.....
— Donald J. Trump (@realDonaldTrump) December 3, 2018

....his wife and father-in-law (who has the money?) off Scott Free. He lied for this outcome and should, in my opinion, serve a full and complete sentence.
— Donald J. Trump (@realDonaldTrump) December 3, 2018

GOP Treason Tactics: Documenting Some Of The Obstruction Of Justice Attempts By The Republicans Using Memos (Such As the Nunes Memo)

TRAITORS! Proofs Of Trump And The GOP Being Traitors! (A Walk-through The Russia Lies & Coverups)

#CorkerKickback: A Perfect Example Of The GOP Openly Using Bribes To Get Votes On Their Sham Tax Bill

Trump Said He Would "Drain The Swamp" And Now He Has Become The Swampiest Of Them All! And The GOP Support This.

Trump Has Become A Dictator Of Orwellian Proportions! GOP Have Enabled A Monster!