Are NRA/GOP Specifically Out To Terrorize And Destabilize American Society?

Background:
1. Why Does The NRA Lie About Its Role In Preventing Legislation For Background Checks?
2. The NRA's Support For No Background Checks... Helps Terrorists, Domestic Abusers And Mass Shooters Alike!
3. Is The NRA A Terrorist Organization? A Look At The NRA's Incendiary Rhetoric And Attack Ads
4. Breaking Down Society & Social Structures Leads To Anarchy AND Violence

The right to drive a car is not guaranteed in the Constitution but everyone now expects to have the right to drive the car (unless blind or disabled). Its a good right. It adds to freedom. And to make this freedom safe for everyone there are drivers tests, eye tests, and drivers licenses with automatic renewals after a number of years. In other words, the responsibility of driving a machine that can be used to run over people (intentionally or accidentally) comes with oversight and accountability within the framework of a free society with rule of law. This post focuses on how gun control was once a mainstream idea for a civilized society even amoungst Republicans and then doing the opposite (making it easy for anyone to get a gun with no oversight or regulation) became the norm because of the NRA.

Notice that despite the large percentage of people supporting banning semi-automatic rifles and the like (basically), GOP opposes it (while saying they are supporting the people rather than their echo chamber fooled cult like base... which grows smaller and smaller, leaving only civil war as the GOP's/Trump's/Fox's political option).

New poll: Highest level of support for gun control ever
The political power of the student survivors of the shooting at Marjory Stoneman Douglas High School appears to have already had some effect. 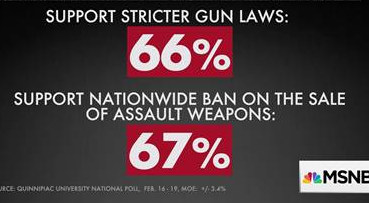 There is even more common ground on having universal background checks that cover people with mental issues (a common sense gun law)... but the GOP went in the opposite direction (see video below);


Compare to the direction the GOP actually went in;

Trump words on gun tragedy ring hollow given past legislation


Congress actually made it easier for the mentally ill to buy guns (and even seemed to have covered up that the Las Vegas rooftop shooter was a right winger!); 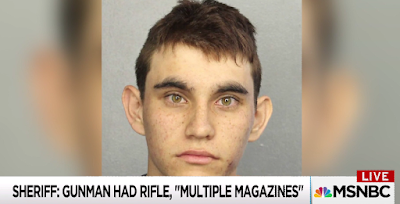 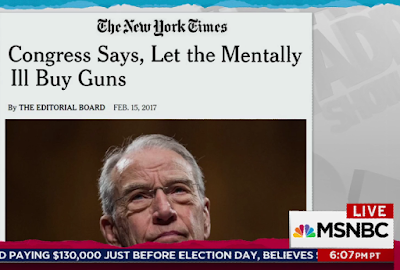 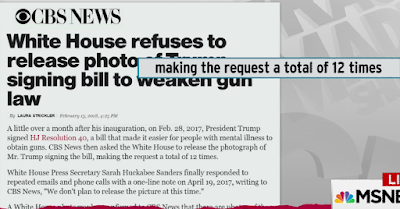 Details on shooter's behavior: A 2016 Florida Department of Children and Families report says that after a breakup with a girlfriend, Cruz began cutting his arms. He also announced plans to buy a gun, put racial slurs and hate symbols on his backpack and suffered from depression, attention deficit hyperactivity disorder and autism, the report said. Despite Cruz's behavior, the report concluded the "final level of risk is low."

Host family saw no clues: Kim and James Snead, who took in Cruz after his adoptive mother died in November, tell ABC's "Good Morning America" that Cruz was polite and "seemed normal." Despite reports of what authorities say was a disturbing social media footprint, James Snead said, "We knew he had one Instagram account. ... The other ones he had, we had no idea about."
Alleged school threats elsewhere: A 14-year-old Norfolk, Virginia, middle school student was the latest person to be arrested Monday for threatening to harm classmates, according to Norfolk police. The student faces a felony charge and is accused of making threats of death or bodily injury to a person or persons on school property, police said. Since the massacre in Parkland, there have been at least a dozen reports of other incidents involving a threat to a school or a weapon on campus throughout the country. In some of these events, the schools have closed or gone into lockdown.