Background:
1. The Ultimate Proofs That Fox News Is Basically Just A Group Of White Supremacists/Nationalists/Nazis
2. Fox News Has Literally Been Created For Obstruction Of Justice (i.e. Choosing Party Over Country Is What They Are All About)
3. The Deep State Red Herring: Created By Alex Jones & Picked Up By The Others To Blame All Of Trump's Crimes On A Fictional Enemy
4. Its Impossible To Talk About Trump And His Decisions Without Fox News

This post outlines an age old strategy of the GOP and Fox News of taking a quote out of context to build a movement with examples from 2012 and looks at the source of some of the political shenanigans that define Trump's/FoxNews's/GOP's political strategy.

Lets begin with Tucker pretending that nothing has happened (i.e. no one is lying and thus there is nothing to be angry about); 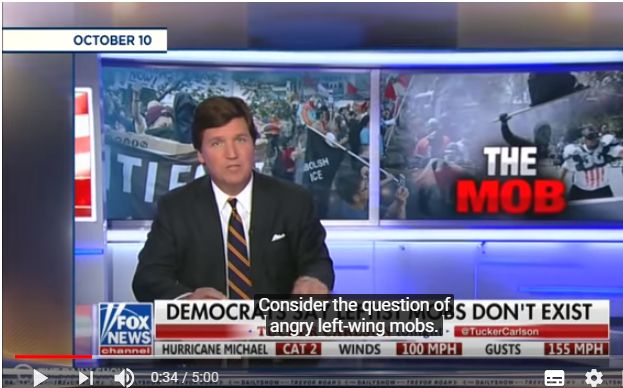 Then we have Newt Gingrich using an Obama point about America being like 1930's Germany and throwing it back at the Democrats in defiance of facts (i.e. Newt is a hardcore traitor); 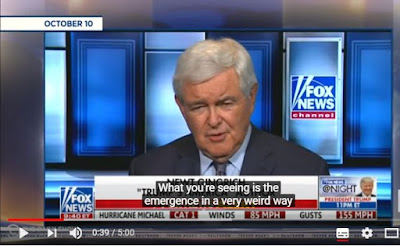 And then you have Ingraham say the Democrats are being bullies for being upset with the undemocratic way - with constant lies and bullying - that the GOP and Fox News are doing i.e. once again taking truth and recasting it as a lie (same strategy that I outlined in this post: Lessons In Propaganda From Fox News 4 - Demonize Your Opponents As Communists AND Nazis (Then they Can't Call You What You Really Are, i.e. Nazis), which I also call the mirror strategy) 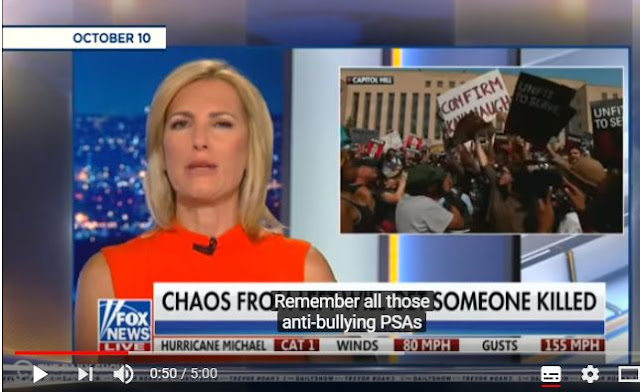 What they have to leave out to push this set of talking points (or "treasonous lies") is the fact that the President is lying. Keeping lies in check is essential to Democracy and a free society, which clearly Fox is not trying to do. Lies examples;

CNN's @brianstelter: The President has been chatty lately, holding pressers and interviews on Air Force One. The result? More pollution in and on the air. The downside of this access is that Trump says so much that's untrue, it sows confusion and division. https://t.co/2y4UEDsaeZ pic.twitter.com/CXQpMt31y2
— CNN (@CNN) October 14, 2018

To push their treasonous lies Fox News is using a time tested and trusted technique used by the GOP in such situations, i.e. the partial - out of context - soundbite to drum up fear, paranoia and anger amoungst their clueless base (whom the GOP purposely manipulate with Fox); 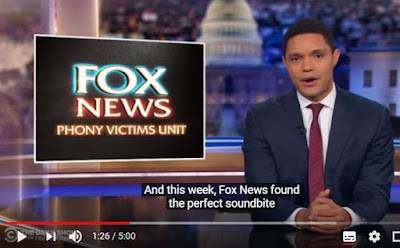 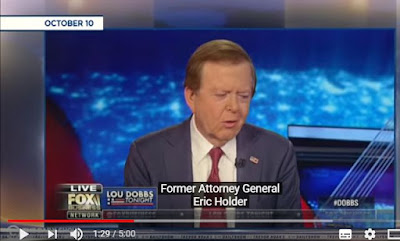 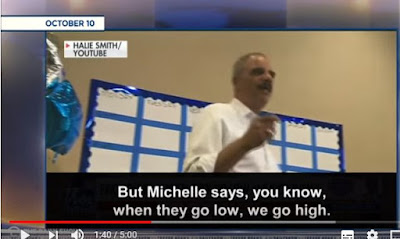 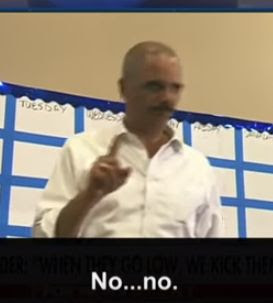 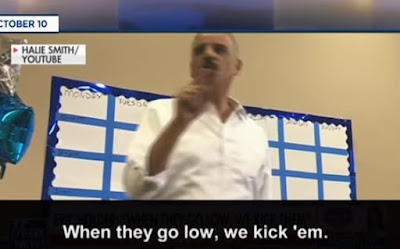 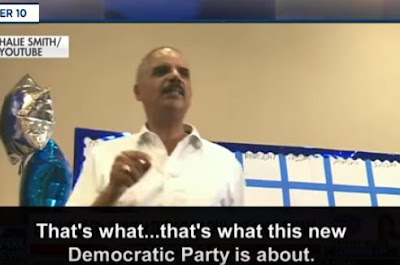 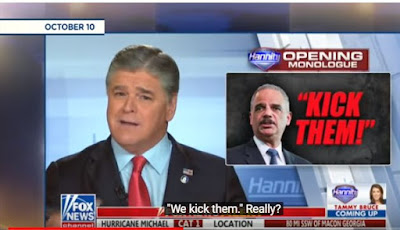 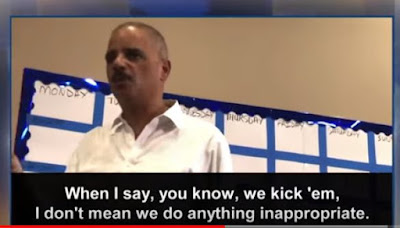 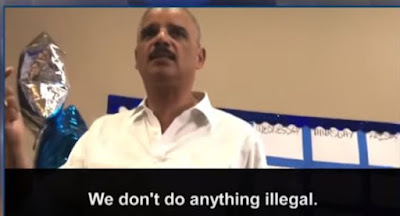 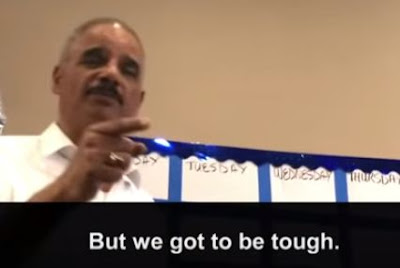 The tactic being used here is a standard Fox News tactic, i.e. take a quote out of context and make it seem bad (fear monger) though the level of stupidity involved seems to be increasing under Trump (like I've said before, the right is trying to start a civil war as its their only way of winning as that's how the Nazis did it). Here is an example of how this tactic was used in 2012 (also in a dumb though effective way as the right follows one channel/group despite all facts like a cult, which is to be expected of religious people as blind faith is an ideal they strive for);

Jon Stewart On The Daily Show: “When was the last time we heard a catchphrase that was such a peculiar mix of braggadocio and whiny petulance,... it’s based on a statement by President Obama that Republicans have taken wildly out of context."

As Mitt Romney put it... "There are a lot of people in government who help us and allow us to have an economy that works and allow entrepreneurs and business leaders of various kinds to start businesses and create jobs. We all recognize that. That's an important thing.... I know that you recognize that a lot of people help you in a business. Perhaps the banks, the investors. There's no question your mom and dad. Your school teachers. The people that provide roads, the fire, and the police. A lot of people help."...

Southern Strategy Proof (GOP): Complete lack of self awareness:
Jed Lewison flagged  this clip from a Romney event in Ohio yesterday, where the Republican candidate continued to take Obama's words out of context, but proceeded to share an interesting perspective. For those who can't watch clips online, Romney said:

"There are a lot of people in government who help us and allow us to have an economy that works and allow entrepreneurs and business leaders of various kinds to start businesses and create jobs. We all recognize that. That's an important thing.... I know that you recognize that a lot of people help you in a business. Perhaps the banks, the investors. There's no question your mom and dad. Your school teachers. The people that provide roads, the fire, and the police. A lot of people help."

Romney went so far as to say yesterday Americans "couldn't have " businesses were it not for public institutions.
What's the difference between this sentiment and the Obama quote that's proof he's a radical, Kenyan, communistic Martian? That's the point: there is no difference. After Romney condemned the president's point, he proceeded to endorse it.

Another example of taking words out of context;

Fox & Friends willfully taking @staceyabrams out of context and running with the line that she's calling for an "illegal blue wave, an alien blue wave...a MS-13 blue wave"

I wonder why they're attacking someone who could be the first ever Black woman governor in the US. pic.twitter.com/WXsywYWZbK
— Gabby Miller (@giphychiller) October 14, 2018

Of Course, The Source Of All The Anger On The Left Has To Do With Easily Provable Lies (Even Using Right Wing Media)

Trump Takes a Victory Lap After Kavanaugh Is Sworn In | The Daily Show
The Daily Show with Trevor Noah Published on 9 Oct 2018 Trump falsely claims Brett Kavanaugh was “proven innocent” during a made-for-TV swearing-in ceremony following the confirmation of the newest Supreme Court justice.

Here Trump says the exact opposite of what happened. Even Fox News reported the reality of a limited FBI investigation,

As Written On Fox News.com: Trump orders FBI investigation of Kavanaugh, as McConnell says nomination is 'moving' forward President Trump on Friday ordered the FBI to conduct a limited"supplemental" background investigation into the allegations of sexual assault against Supreme Court nominee Brett Kavanaugh, as Senate Majority Leader Mitch McConnell said Republicans are "moving" forward with plans to vote. “I’ve ordered the FBI to conduct a supplemental investigation to update Judge Kavanaugh’s file," Trump said in a statement. "As the Senate has requested, this update must be limited in scope and completed in less than one week.”
...so for Trump to lie so blatantly can only suggest he is purposely acting like the worst possibly tyrant/dictator scenario that George Orwell talked about or is is just insane (interestingly enough, his base, controlled by Fox News and the GOP, don't care); 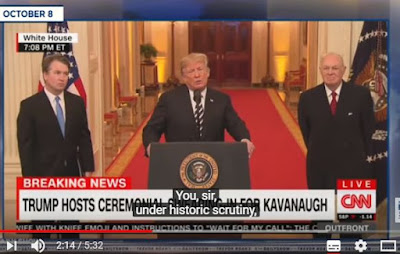 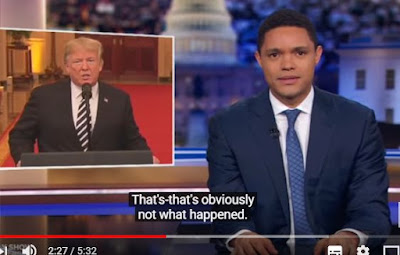 What even more interesting that GOP leaders, such as Mitch McConnell, have now made it obvious to the scientifically literate community in America and around the world that he will commit any horrendous action against Democracy and this Country (with obvious lies) to win political victories; 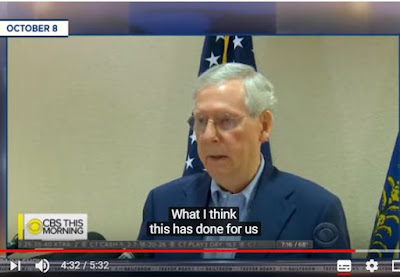 i.e. Mitch McConnell found that lying to the people and using Fox News's cultlike following and lying personalities, he is trying to incite the people to do the wrong thing and he has found that this treasonous strategy is effective!