Background: Trump, The GOP And Fox News Are Now Pro-Gang Rape! (I Bet You Thought Supporting, The Pedophile, Roy Moore Was Bad Enough)

Apparently Senator Orrin Hatch believes Christine Ford, who was just testifying about sexual assault and rape, is an attractive person. I guess we can figure out what Orin Hatch's sexual fantasies are...

Dr. Ford's Heartbreaking Testimony Was Not A Con Job - Republicans controlling the Senate Judiciary Committee were ready to accommodate Dr. Christine Blasey Ford with anything she wanted. Except for one thing.


The relevant part of the video for this post begins at 6:40; 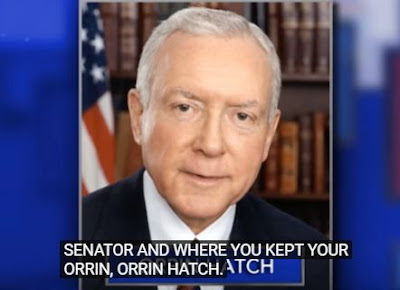 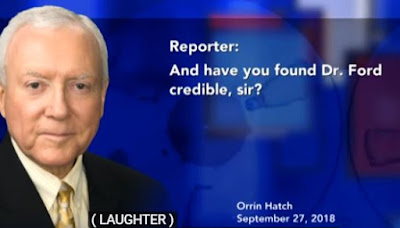 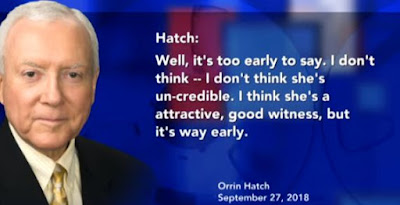 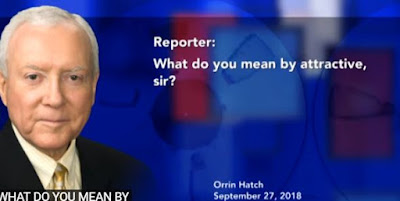 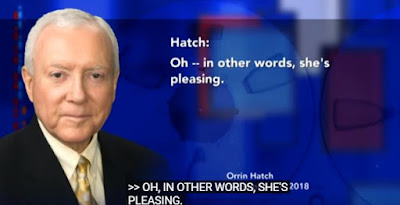 Note: His staff is saying he says that alot about men and women (without actually providing any proof since the burden of proof lies on them). I think that's unlikely as why would a long time US Senator not develop the skills to talk to the people in a a language they actually speak, i.e. human? Are they saying after all this time he still doesn't realize that thinking and saying a woman talking about rape to be attractive suggests rape talk turns you on. The only proper way to deal with Republicans in our era (or any politician, I hope, in the future, i.e. polygraphs determining intent should be required before running for office): Put him on a lie detector and we will probably find he believes the witness, was turned on and supports Brett Kavanaugh because at heart he is a traitor like all Republicans. I would say most Republicans but the measure by which Republicans are judged to be normal in the media are just horrific, so "all Republicans are evil" is the appropriate thing to say until any innocent Republicans have been cleared after being indicted for treason and going through lie detection tests to determine if they were attacking the country and people on purpose or accidentally, because they are stupid and/or incompetent.

This is something the GOP have been doing for a long time, i.e. being pro-rape in thier political stances. Colbert jokes in the following video that rape approval ratings have gone down (since they obviously see no problem with that)...

Clearly the GOP are answering to a higher calling than what we would expect from normal politicians who tend to follow polls; 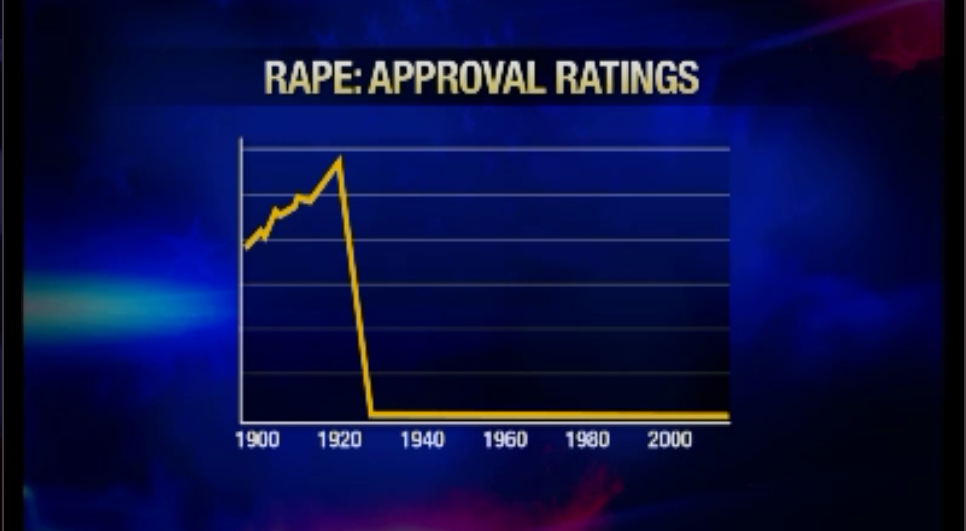 The question is, do the majority of the people agree with this higher calling? If they don't is rigging elections (gerrymandering) and Fox News, the GOP's answer to this problem of being "unpopular"?

The House GOP's Plan to Redefine Rape From Mother Jones: "Under Ryan's pro-life bill, a rapist could go to court and prevent his victim from getting an abortion."

"From denying abortion to military rape victims, to aiming for total bans in the states, the GOP's assault continues"
Article: "Raped in the military, then raped by Congress"
"Legitimate rape" stops pregnancy because "the female body has ways to try to shut that whole thing down," says McKaskill's GOP opponent
After Akin, GOP Makes Extreme Abortion Policy Official
Steve King echoes Akin

Rick Santorum: Becoming pregnant by a rapist is a gift from God


Moment Of Zen: The "Good Christian" follows the Bible...

GAYWATCH - HOLDOUTS EDITION 7/23/2012 - The Boy Scouts of America reaffirms its ban on openly gay boys and adult leaders, and Chick-fil-A's exclusionary policy incurs the wrath of the Muppets.


At approx 3 mins 40 secs: “If a man happens to meet a virgin who is not pledged to be married and rapes her and they are discovered, he shall pay the girl’s father fifty shekels of silver. He must marry the girl, for he has violated her. He can never divorce her as long as he lives” (Deuteronomy 22:28–29).

If nothing else, permission of rape (& pedophilia!) is spread throughout the Bible, which explains why saying 'Ford is attractive', during a sexual assault hearing, seems like an appropriate comment to an average Republican;


They must be dividing the spoils they took: there must be a damsel or two for each man, Spoils of dyed cloth as Sisera’s spoil, an ornate shawl or two for me in the spoil. - Judges 5:30 NAB

Lo, a day shall come for the Lord when the spoils shall be divided in your midst.  And I will gather all the nations against Jerusalem for battle: the city shall be taken, houses plundered, women ravished; half of the city shall go into exile, but the rest of the people shall not be removed from the city.- Zechariah 14:1-2 NAB

When a man sells his daughter as a slave, she will not be freed at the end of six years as the men are.  If she does not please the man who bought her, he may allow her to be bought back again.  But he is not allowed to sell her to foreigners, since he is the one who broke the contract with her.  And if the slave girl’s owner arranges for her to marry his son, he may no longer treat her as a slave girl, but he must treat her as his daughter.  If he himself marries her and then takes another wife, he may not reduce her food or clothing or fail to sleep with her as his wife.  If he fails in any of these three ways, she may leave as a free woman without making any payment. - Exodus 21:7-11 NLT

“When you go out to war against your enemies and the LORD, your God, delivers them into your hand, so that you take captives, if you see a comely woman among the captives and become so enamored of her that you wish to have her as wife, you may take her home to your house.  But before she may live there, she must shave her head and pare her nails and lay aside her captive’s garb.  After she has mourned her father and mother for a full month, you may have relations with her, and you shall be her husband and she shall be your wife.  However, if later on you lose your liking for her, you shall give her her freedom, if she wishes it; but you shall not sell her or enslave her, since she was married to you under compulsion.” - Deuteronomy 21:10-14 NAB

As you approach a town to attack it, first offer its people terms for peace.  If they accept your terms and open the gates to you, then all the people inside will serve you in forced labor.  But if they refuse to make peace and prepare to fight, you must attack the town.  When the LORD your God hands it over to you, kill every man in the town.  But you may keep for yourselves all the women, children, livestock, and other plunder.  You may enjoy the spoils of your enemies that the LORD your God has given you. - Deuteronomy 20:10-14

Moses, Eleazar the priest, and all the leaders of the people went to meet them outside the camp.  But Moses was furious with all the military commanders who had returned from the battle.  “Why have you let all the women live?” he demanded.  “These are the very ones who followed Balaam’s advice and caused the people of Israel to rebel against the LORD at Mount Peor.  They are the ones who caused the plague to strike the LORD’s people.  Now kill all the boys and all the women who have slept with a man.  Only the young girls who are virgins may live; you may keep them for yourselves. -Numbers 31:13-18 NLT

So they sent twelve thousand warriors to Jabesh-gilead with orders to kill everyone there, including women and children.  “This is what you are to do,” they said. “Completely destroy all the males and every woman who is not a virgin.”  Among the residents of Jabesh-gilead they found four hundred young virgins who had never slept with a man, and they brought them to the camp at Shiloh in the land of Canaan. The Israelite assembly sent a peace delegation to the little remnant of Benjamin who were living at the rock of Rimmon. Then the men of Benjamin returned to their homes, and the four hundred women of Jabesh-gilead who were spared were given to them as wives.  But there were not enough women for all of them.  The people felt sorry for Benjamin because the LORD had left this gap in the tribes of Israel.  So the Israelite leaders asked, “How can we find wives for the few who remain, since all the women of the tribe of Benjamin are dead?  There must be heirs for the survivors so that an entire tribe of Israel will not be lost forever.  But we cannot give them our own daughters in marriage because we have sworn with a solemn oath that anyone who does this will fall under God’s curse.” Then they thought of the annual festival of the LORD held in Shiloh, between Lebonah and Bethel, along the east side of the road that goes from Bethel to Shechem.  They told the men of Benjamin who still needed wives, “Go and hide in the vineyards.  When the women of Shiloh come out for their dances, rush out from the vineyards, and each of you can take one of them home to be your wife!  And when their fathers and brothers come to us in protest, we will tell them, ‘Please be understanding.  Let them have your daughters, for we didn’t find enough wives for them when we dest60royed Jabesh-gilead. And you are not guilty of breaking the vow since you did not give your daughters in marriage to them.'”  So the men of Benjamin did as they were told.  They kidnapped the women who took part in the celebration and carried them off to the land of their own inheritance.  Then they rebuilt their towns and lived in them.  So the assembly of Israel departed by tribes and families, and they returned to their own homes. - Judges 21:10-24 NLT