Trump's Terrorist Attack On the Press (With Fox News Support)

Background:
1. Republicans Demonstrate How To Kill People With Rhetoric (Something We Know Can Be Done Since The 1900s!)... Can Regular Citizens Get Secret Service Protection Too?
2. NRA, Infowars, Fox News, Breitbart And Sinclair Function As A Terrorist Propaganda Wing Of The GOP That Seeks To Build Hate & Muddy The Waters (Kinda Like State TV)
3. The Right Wing Are Basically Terrorists Or "Terrorist Creators" (Alt Right Terrorists Is The Politically Correct Term)
4. Trump's White Supremacist - And Anti First Amendment - Attack On The NFL's Black Players Backed By Fox News And The GOP While Simultaneously Promoting & Being Nice To White Supremacists & Neo Nazis...

MSNBC's Katy Tur explains how Trump's rhetoric on the press puts journalists' lives and safety at risk Tur: "'I hope you get raped and killed,' one person wrote to me just this week ... in case you want to argue that this has nothing to do with the president, the most recent note I got ended with 'MAGA.'

KATY TUR (HOST): Yeah, we get it, You don't like us. Fine. But do you have to put our lives in danger? The president continues to call the press "the enemy of the people"; even after four journalists and one sales assistant were shot dead in a Maryland newsroom by a man who was angry with what they factually reported about him, even after the publisher of The New York Times stressed to him in a private conversation that his words were putting journalists in mortal danger, even after CNN White House reporter Jim Acosta was shouted down and taunted at a rally the other night in Florida. And even after the president's own daughter, at least publicly, disagreed with her dad.

Previously (i.e. history of Trump's terrorist attacks on the press):
MSNBC reporter Katy Tur explains the consequences of Trump inciting furor at the press
MSNBC's Katy Tur recounts the moment when Trump's attacks on her spurred Secret Service support
The Trump administration’s 2017 war on the press, by the numbers


By comparison,  Anwar Al Awlaki, also an American Citizen, incited people to attack innocent, non violent, Americans. Anwar Al Walaki was assassinated for the threat he posed other American Citizens that he was attacking and thus was deemed unworthy of a trial as outlined in the Constitution for American Citizens... the hypocrisy of the color/"war on terror" laid bare? Flashback...

ASSASSINATION OF ANWAR AL-AWLAKI 10/3/2011 In a CIA-led operation, the military assassinates one of America's most wanted terrorists and Facebook friends.

A quick review of Fox News helping spread this virulent - and damning - rhetoric;

Tucker Carlson: The left’s opposition to ICE violates “a basic principle of Anglo-American civilization” Carlson: "The left is willing to jettison that ancient principal to protect people who shouldn't be here in the first place"

TUCKER CARLSON (HOST): Well, a basic principle of Anglo-American civilization is that everybody is treated equally before the law, no matter who you are, no matter what your political views are.
Now, the left is willing to jettison that ancient principal to protect people who shouldn't be here in the first place.
During the month-long occupation of ICE, the Mayor of Portland Ted Wheeler announced he supported the protesters, and refused to have the police intervene against them.

This is actually fascinating. Tucker takes something that originated in America and turned it into a whte thing while ignoring the fact that the Founders lived amougst Native America's who were tribal and ALL tribes function by tribal council, i.e. Democracy. Not to mention even the word "Democracy" and its earliest formulations in the western world were by Mediterranean people and the "Anglo Saxons" were the barbarians/savages of the North that, later, formed into feudal chiefdom (like the robber baron culture of today) with Kings & Queens and remained in a state of Monarchy till the Founders started a new fad. the Constitutions. Probably after noticing that Native Americans treated all men as equals. But even ignoring that Tucker as absolutely no basis in fact and thus he solidifies his Nazi/White-Supremacist-Inciter credentials. It is interesting that the west has always served its leaders like Kings like they serve Trump and the Kochs (and the few other bribers/"donors") as they do today. At least, its lowest common denominator still does. Which I call the Nazi right but I understand that this characterization is being fought by the Nazis and the other people are giving ground. I have no intention of doing so. Nazis are Nazis. No matter what they call themselves.


Here is the NRA using the sort of tactic that got a congresswomn shot and Judge killed (also standard GOP/Fox operating procedure);

NRATV deceptively edits Nancy Pelosi speech to claim she praised MS-13 gang members
NRATV host Grant Stinchfield aired a deceptively edited video of House Minority Leader Nancy Pelosi (D-CA) to claim she defended MS-13 when she supposedly criticized President Donald Trump for not respecting “the dignity and worth of” the gang members. Stinchfield went on to accuse Pelosi of “Trump derangement syndrome.” From the August 3 edition of NRATV’s Stinchfield:


Here is the NRA using another common GOP/Fox tactic, i.e. saying, 'its not us that are the terrorists its them' despite the in-your-face evidence (shows how dumb their base really is, seriously);


Hannity is always where he is most needed to terrorize the population, destroy democracy, and do the stuff GOP does. Hannity's lies & hypocrisy shines like the sun and still his "intelligent" viewers do not see (Hannity often makes fun of his viewers by calling them intelligent, part of his con to flatter people into supporting treason)...

Sean Hannity celebrates harassment of CNN's Jim Acosta at Trump rally: "They're screaming at you for a reason" Hannity: "They don't like your unfair, abusively biased treatment of the president of the United States"

Another example of threatening news people with personal violence;


Previously:
Fox News contributor: Jim Acosta's conduct makes him "an enemy to the American people"
Fox reporter thanks Trump after the president refuses to answer questions from CNN and calls on him instead
On CNN, April Ryan points out the real effects of Trump's attacks on the press


[Update - Sep 18, 2018] Trump Freely Criticizes the Free Press - The Late Show with Stephen Colbert - Trump responds to the press' pleas for a free press by attacking the free press 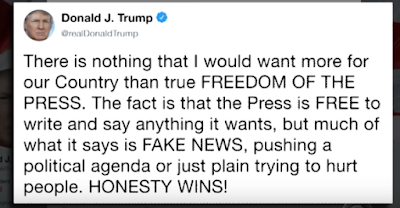