Laura Ingraham: One Of The Most Evil Women The Right & Fox News Has To Offer. A Terrorist In her Own Right.

Kimberly was just sharing dick pics while Laura Ingraham is a conspiracy theorist and Nazi style propaganda artist for the Right and Fox News in PRIME TIME. An evil Mullah type terrorist in her own right but for Christians. Here she is attacking immigrants, as is one of her favorite pastimes as a white supremacist supporting Trump's white immigrants only policies so she regularly attacks immigrants by taking a crime of any one and making it everyone's crimes. The fact that she leaves out the rapes and gang rapes by ICE (and even the more well known military rapes) suggests she is as much a war party promoter as any GOP person. Her hypocrisy is well illustrated with the following examples;

This actually fits her career pattern. For example here she says "Mexicans are raping our people" but she never covers the 15000 per year military rapes that have been well documented (below);

Laura Ingraham: Mexicans "Have Come Here To Murder And Rape Our People" Ingraham: "Doesn't Mean Everyone Who Comes Across The Border Is A Nasty, Horrible Person, But They Have Violated Our Laws"

What she avoids telling her viewers/listeners, military is a rape machine more than anything else thus creating the impression that the rare rape by an immigrant is an epidemic while an epidemic of rape in the military doesn't even exist;

Ever since the Navy’s Tailhook scandal in 1991, the Pentagon has declared a “zero tolerance” approach to sexual assault and rape by troops. But as “The Invisible War,” a powerful new documentary out on DVD this week makes clear, the U.S. military’s actual measures to prevent rape and punish rapists range from insulting to laughable to virtually non-existent. Meanwhile, women (and men) who sign up to risk their lives for our country are being driven out of the armed forces after having their bodies assaulted and their careers ruined.
Director Kirby Dick’s previous documentaries include a film about sexual abuse in the Catholic church, and the scandals in these two institutions do have a striking number of similarities. Both handle sexual assault charges internally, both have erred on the side of protecting the reputations of those accused while ignoring the needs and rights of victims. And in both worlds, the often intimate relationship between victim and rapist can make the crime even more confusing and painful.
The women of “The Invisible War” are almost deceptively strong, taking great pride in their military service and relating the abuse they suffered in unflinching detail. At one point, a former Army criminal investigator who has appeared throughout the film to testify about the Army’s reluctance to handle rape cases talks about her own rape by a commanding officer. It takes a moment to register that this no-nonsense woman is no longer in the military because she reported her rape (she was given an administrative discharge with no benefits after nearly ten years of service) while her rapist continues to rise up the ranks.
CNN: Interview - Amanpour: Combating sexual assault in the military

By Mick Krever, CNN - It is not every day that the man in charge of all of America’s Air Force calls a modest sergeant. Which is why Jennifer Smith was so surprised to get General Mark Welsh’s call.

Sgt. Smith had filed a formal complaint alleging sexual assault and harassment, which she said had gone on for years. When she finally revealed the assault to her superior officers, after years of keeping it a secret, she expected the Air Force to act.

“I was so caught off-guard by the fact that he called me, and considering who he is, and I know my place, I said, ‘Yes, sir. Well thank you for calling me.’”

“He just said that he was going to do the best that he could,” Smith told CNN’s Christiane Amanpour on Thursday. 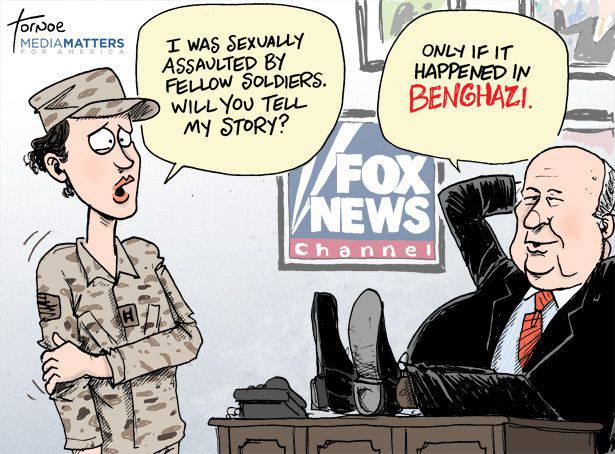 On the other hand... we have enough evidence to suggest that this is what the GOP wants...
RAPE-NUTS OCTOBER 14, 2009 - BARBARA EHRENREICH 10/14/2009 Al Franken proposes getting rid of the old "it's OK if you get raped" clause in government contracts, but 30 Republicans object. (4:42)

What other reason could there be for Fox not to cover the military rape epidemic but cover the rare rape by an "illegal" than it being a scapegoating tactic?

[Update Aug 20, 2018] This one is pure genius. She probably realized, based on fact based news reports, that ICE and the Trump Administration are basically trafficking in kids so she came out calling the parents (!) of the kids the traffickers to get ahead of the story with misinformation. Democrats are squeamish about sex stuff and would never go after ICE for being rapists, gang rapists, sex traffickers and child abusers (child and immigrant abuse with prisoner of war type situations are normal for ICE);

Laura Ingraham: Children not yet reunited with families are being protected by Trump from their drug abusing, child trafficking parents Ingraham: "Democrats wailing over the plight of the remaining children are conveniently ignoring the facts"