Note - Gerrymandering Is A Subset Of "Rigging Elections" Or "Election Fraud", An Important Aspect That Gets Left Out Of Media Coverage

Background: Media: How The "Left" Enables GOP Tyranny - Making Russia Seem Worse Than The GOP (& How Russia & The Right-Wing/GOP Are Really In A Symbiotic Relationship!)

When you skew an election to a particular result, you have "rigged" an election. You can rig an election by bullying people not to vote, stuffing ballot boxes, not allowing them to vote (voter suppression) or rigging the district to count only votes that help you (gerrymandering). No matter what process to rig an election is used it is still election rigging and that's how it should be treated and described in the press, i.e. as an immoral attempt to rig an election and subvert the democratic process.

The fact that gerrymandering is a subset of election rigging gets left out of media coverage to such an extent that we need this video to illustrate the problem...

CORRUPTION, AMERICAN-STYLE 11/15/2016  As the U.S. prepares for a potential African-style dictatorship under President-elect Trump, the developing world learns how to market government corruption like America. 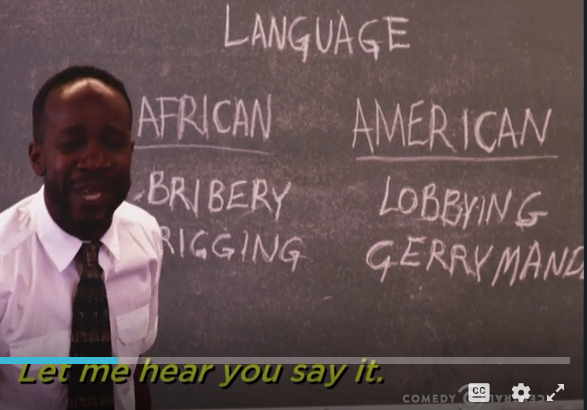 Collins Dictionary: election rigging(n) New Word Suggestion election rigging is the act of dishonestly organizing an election to get a particular result. it is an electoral fraud and an interference with the election process.

Partisan gerrymandering is rampant in America. Read more about the decision and its significance on vox.com: http://bit.ly/2CORxqW Subscribe to our channel! http://goo.gl/0bsAjO Every ten years, America readjusts its voting districts. Which state you live in determines a key aspect of that prospect: who draws the map? In most states, politicians get to control that process. That can sometimes lead to political gamesmanship from both parties. In early 2018, the state of Pennsylvania’s Supreme Court found that the latest redistricting plan set up voters with a politically biased voting map. Which made it easier for one party to win representation in the national body of lawmakers. The implications of this discovery are significant. A new map could be a part of a shift in the balance of power in the United States.


Rolling Stone: How the GOP Rigs Elections With a combination of gerrymandering, voter-ID laws and dark money, Republicans have tipped the political scales in their favor. Will it be enough to keep Democrats from claiming victory in 2018?

To say that Republicans are facing a toxic political environment heading into the 2018 midterm elections would be a massive understatement. Donald Trump is the most unpopular president at this stage of his term in modern American history. Just three in 10 Americans have a favorable view of the Republican Party, and Democratic voters' enthusiasm to vote in 2018 tops Republican voters' by 17 points. But because of sophisticated gerrymandering, Republicans who should be vulnerable, like Wanggaard, have been seen as untouchable. "It's more challenging than it should be because of the way the districts are drawn," says Jenni Dye, who works for Democrats in Wisconsin's state Senate. Wanggaard is among 11 Republican state senators up for re-election in 2018, but no one has stepped forward to challenge him yet.
The gerrymandering in Wisconsin, which experts call among the most extreme in U.S. history, is but one part of Republicans' stealth plan to stay in office. Since Gov. Scott Walker and the Republican Legislature took power, they've also introduced some of the country's harshest voting restrictions, passing laws that make it harder for Democratic-leaning constituencies to register to vote and cast ballots. At the same time, the state has become the "Wild West of dark money," according to Lisa Graves, a senior fellow at the Madison-based Center for Media and Democracy, with Republican politicians like Walker raising unprecedented sums from billionaire donors to finance their campaigns.
"All three of these things have to be seen as part of a whole," says Eric Holder, Barack Obama's attorney general, who founded the National Democratic Redistricting Committee in 2016 to challenge Republican gerrymandering efforts. "Unregulated dark money combined with these voter-ID laws combined with gerrymandering is inconsistent with how our nation's system is supposed to be set up. American citizens ought to be concerned about the state of our democracy. We could end up with a system where a well-financed minority that has views inconsistent with the vast majority of the American people runs this country."
More immediately, a beleaguered Republican Party tainted by Trump could still retain majorities in 2018 and 2020. "It's not a level playing field," says Tom Perez, head of the Democratic National Committee. "There are millions of people whose votes effectively don't count." And as a measure of the GOP's ability to maintain a political advantage, despite widespread public opposition to its policies, look no further than Wisconsin. "We've been under a counterrevolution here for the past six years," says Matt Rothschild, executive director of the Wisconsin Democracy Campaign, which tracks the influence of money in politics. "Walker has urged other states to follow his model. Reactionary politics is a big Wisconsin export now."
In the summer of 2011, soon after activists occupied the rotunda of the Wisconsin state capitol to protest Walker's bill stripping public-employee unions of collective-bargaining rights, Republican members of the legislature visited the offices of Michael Best & Friedrich, the party's go-to law firm. The GOP was in control of the state's redistricting process for the first time since the 1950s, and Republicans were shown to the "map room," where their aides were drawing new political districts in secret following the 2010 census. The legislators signed confidentiality agreements, pledging not to discuss the work with anyone, even though the redistricting was financed with taxpayer funds. "Public comments on this map may be different than what you hear in this room," read the talking points distributed to GOP legislators. "Ignore the public comments."
The new maps had titles like "Aggressive," to describe how they favored Republicans. "The maps we pass will determine who's here 10 years from now," a legislative aide told the Republican caucus. "We have an opportunity . . . to draw these maps that Republicans haven't had in decades."
On July 11th, 2011, the maps were introduced in the Legislature; no Democrat had seen them before they were released. There was one public hearing, two days later, and the reshaped districts were approved the next week on a party-line vote. "This looks fair to me," said Wanggaard to the Milwaukee Journal Sentinel. "I don't have anything jumping out at me." (Wanggaard declined to comment for this article.)
Yet his district had been radically transformed, from a 50/50 swing district to one that favored a Republican by 16 points. Racine and Kenosha counties, which border each other, had been separate state Senate districts, which made sense: The counties have their own newspapers, school districts and boards of supervisors. Both districts were politically competitive. "For the citizens, their vote really mattered," says Lehman, the former state senator. "That's the way it ought to be in every single district in America."
Republicans took the districts and flipped them vertically, combining Racine and Kenosha counties for the first time in a hundred years. As a result, Republicans gained at least two seats in the state Legislature. Wanggaard's new red district encompassed the sprawling GOP exurbs and farmland, with Democratic voters concentrated in the urban centers of the two counties.

Brookings Institute: How to rig an election in three not-so-easy steps

Washington Post: Republicans have rigged the system for years. Democrats are finally fighting back.

Newsweek: HOW REPUBLICANS ARE TRYING TO RIG ELECTIONS IN TRUMP'S AMERICA

Yet another election rigging plan by the GOP

Maddow: GOP election rigging plan withers in public light Rachel Maddow reports on the increased public awareness of a state-level Republican plan to change the rules for electoral votes to benefit Republican presidential candidates, and notes prominent Republicans in several states are suddenly disavowing the idea (except in Michigan, which might be shameless enough to try it).

Lessons In Politics From The Republicans Or Republican Hypocrisy Baseline (i.e. How GOP Behave When Not In Power)