F -15s Scrambled Over Oregon For A UFO, A Few Celebrity Sightings And More

Unlike the UFO video from the Pentagon we don't have an actual visual on the UFO that shocked Oregon and California so bad that F-15s were launched to intercept it (unsuccessfully). We do have audio and radar so that gives us a look into another mysterious encounter with advanced aviation technology that seems to come from extra-terrestrial origins given its flight capabilities. So this is a major sighting. The miscellaneous collection of sightings include celebrity sightings and some unidentified UFOs.

You Need To Hear These FAA Tapes From That Oregon UFO Incident That Sent F-15s Scrambling New evidence offers great detail of the bizarre event and provides unprecedented insight into how such a unique incident is dealt with in real time.


You can get more information about this event here.


Airliners And F-15s Involved In Bizarre Encounter With Mystery Aircraft Over Oregon The FAA, the USAF, and air traffic control recordings all confirm the bizarre event did indeed occur last October.

Something quite out of the ordinary occurred in the skies over Oregon on October 25th, 2017. A mystery aircraft was flying in daylight hours among the steady stream of airliners that traverse from south to north, between locales in California and Nevada and cities like Portland and Seattle and beyond. The incident began, at least as best we can tell, around 4:30pm near the California-Oregon border and resulted in multiple pilot eyewitnesses, recorded air traffic control audio, and eventual confirmations from both the FAA and North American Aerospace Command (NORAD) that it did indeed occur.


This indicates a pattern of behavior of bad/rude hospitality going back decades;

The 5,000 pages, mainly of correspondence with the public, of Whitehall documents on UFOs released today plot changing official attitudes over 50 years to the "flying saucer" mystery.
They show that the question of possible alien landings was taken so seriously at the height of the cold war in the 1950s that Britain's Joint Intelligence Committee in April 1957 held a special presentation from the Air Ministry's head of air intelligence, Air Vice Marshal Bill McDonald, on "unexplained aerial phenomena". Four incidents that month involving UFOs tracked by RAF radar remained "unexplained".

A liitle paranoid but still a possibly sighting...

Out of this Wilde! 80s pop star Kim lives in fear she's on an alien hit list... as she claims to have had encounters with UFOs in her back garden

Other celebrity sightings to keep her company...

Russell Crowe claims he spotted a UFO: CNN's Erin Burnett reports on a video that actor Russell Crowe posted online, saying it was a UFO sighting.

Shaun Ryder on UFOs: 'It's not that I want to believe – it's impossible not to' As singer with the Happy Mondays Shaun Ryder used to do a lot of drugs. But that doesn't explain the encounters with aliens he has turned into a new TV show, he insists


On UFOs: 3% of all sighting reported to MUFON remain unidentified (i.e. 97% of UFO sightings are from earth, such as airlines, military, meteors, drones, birds etc.)

ALIEN MOTHERSHIP? Huge object seen ’releasing UFOs’ over city in bizarre video A HUGE craft has allegedly been recorded "releasing several smaller UFOs" over a city, a video report by conspiracy theorists claims. Footage released by YouTube UFO channel Thirdphaseofmoon shows what appears to be a cluster of lights hovering in the night sky.

Here, in the distance, you see multiple flying objects going off in different directions AND moving away as a cluster (indicating amazing flight skills/patterns). They change directions and do not fall toward or away from earth as wold be expected as meteors. They also seem to be emitting light (as one commentator put it).

Eerie lights swirling above Milwaukee puzzle news anchors who suggest the mysterious orbs could be aliens - A sky view camera captured mysterious white lights dancing across the sky in downtown Milwaukee on Tuesday morning
Two news anchors puzzled by the strange sighting suggested the orbs were aliens
However, it was later proven that the lights were nothing more than a big flock of seagulls flying above the Milwaukee County Courthouse

Turns out they were seagulls made to seem unusual because of shutter speed of the cameras ; 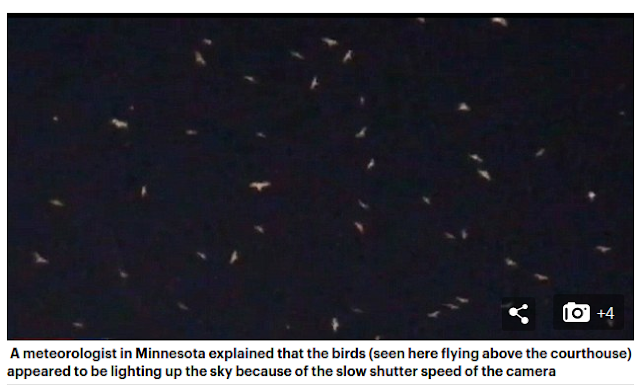 PROOF OF BLACK PROJECTS? Stunning 'TR-3B triangle UFO filmed on dashcam'A STRANGE triangular UFO filmed on a dashcam is being hailed as potential proof of the US government being involved in top-secret so-called black projects to create new spy craft. Conspiracy theorists claim the seemingly three-pointed object in the night sky could be a TR-3B - an alleged top-secret US craft that was built using "reverse-engineered" alien UFO technology and can fly into space.

It turns out that the cultural repository for American alien conspiracies has a much more mundane history. Area 51, the secret government space in the Mojave desert, was used to test aerial programs. While government officials have mentioned the base in passing over the years, a newly declassified history provides the first official acknowledgement that Area 51 exists and provides new details on what the space has been used for – and it is not what conspiracy theorists want to hear. According to the seven-chapter history, Area 51 was used as an aerial testing ground for US government projects. The released documents specifically refer to the U-2 and Oxcart aerial surveillance programs. "High-altitude testing of the U-2 soon led to an unexpected side effect – a tremendous increase in reports of unidentified flying objects (UFOs)," according to the documents, which became public through a Freedom of Information Act request submitted by George Washington University's National Security Archive. The documents, first published in 1992 and posted online on Thursday, attributed these UFO "sightings" to the U-2s ability to fly above 60,000ft – which was considered too high for manned flight by the general public at the time. "U-2 and later Oxcart flights accounted for more than one-half of all UFO reports during the late 1950s and most of the 1960s," according to the documents. The U-2 reconnaissance aircraft has been used to conduct surveillance since the 1950s and was used extensively to surveil the Soviet Union, China and Cuba in the cold war.


This "UFO sighting" is seems to be the military test flying or mission flying a drone type not released to the public. It seems like this article is trying to create drama where these is none so I thought I should point it out. (i.e. there is no evidence here to suggest this is an craft made by an ET, nor is there any evidence to suggest a dog fight of any sort) 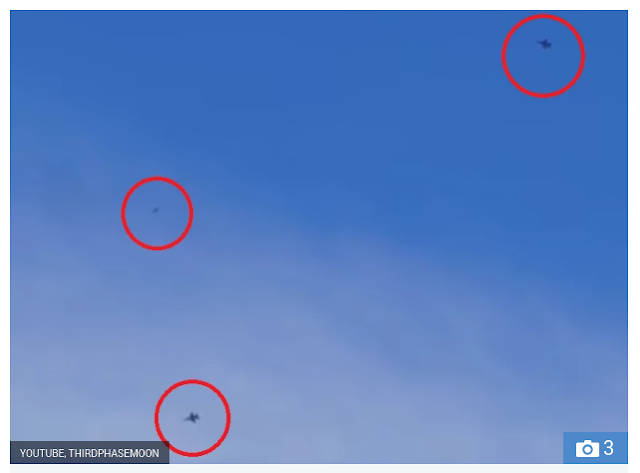