With RNC's Funding Of Roy Moore & Trump's Endorsement Of Him... Truth Tellers Can Now Official Use The Term "The Pedophile Party" in Describing The GOP

Background:
1. Trump, Hannity, And The Pedophile Brigade
2. The Veritas Pedophile Brigade Is Just Another Billionaire (Koch & Devos) Funded Fake News Project
3. Don't Forget: Donald Trump Wants To Bang His Daughter
4. Trump Wants To Be A Dictator & The GOP Likes Dictators. They Couldn't Be A More Perfect Match for Each Other... Especially Now That They Are OFFICIALLY The Party Of The Pedophile
Trump endorses Roy Moore despite winning the vote on his tax bill in the Senate making it clear that even having all Republicans kiss your ass and voting to pass your awful bills is not enough to reject a proven pedophile. Maybe this explains Trump's relationship with his daughter? In any case, we can now officially call the GOP the party of the pedophile.

Democrats refusal to give even one vote for massive Tax Cuts is why we need Republican Roy Moore to win in Alabama. We need his vote on stopping crime, illegal immigration, Border Wall, Military, Pro Life, V.A., Judges 2nd Amendment and more. No to Jones, a Pelosi/Schumer Puppet!
— Donald J. Trump (@realDonaldTrump) December 4, 2017 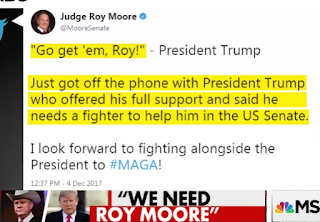 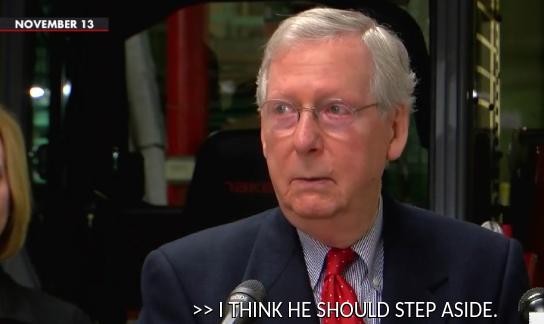 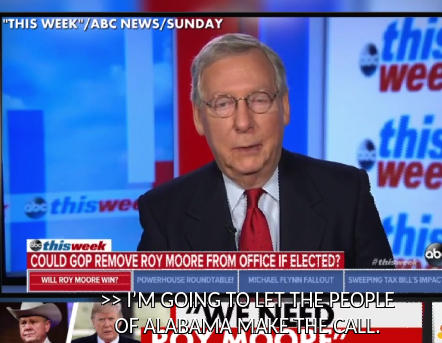 Funding a pedophile (defended with fake facts like the climate change approach the Republicans have) has now made the Republican party "the Party of The Pedophile".

RNC is getting back into Alabama Senate race


Washington (CNN)The Republican National Committee will transfer funds to the Alabama Republican Party following President Donald Trump's endorsement Monday of GOP Senate candidate Roy Moore in that state's special election next week, according to a senior RNC official.
The official added, "The RNC is the political arm of the president and we support the President."
Breitbart News first reported on the RNC's move to re-engage in the race.
While Trump and the RNC are backing Moore, the National Republican Senatorial Committee is not changing its stance. An NRSC source says it is staying out of the race and that Chairman Sen. Cory Gardner of Colorado remains committed to this position.
Trump put his full support behind the controversial Republican candidate on Monday despite accusations by one woman that Moore had initiated sexual contact with her when she was 14 years old. The legal age of consent in Alabama is 16. After the report, another woman came forward to accuse Moore of sexually assaulting her when she was 16, and several other women said he had pursued relationships with them when they were teens and he was in his early 30s. Moore, now 70, vehemently denies the allegations.
Trump called the Republican candidate on Monday and, according to White House spokesman Raj Shah, the two "had a positive call" during which they "discussed the state of the Alabama Senate race."
Trump also will be holding a political event in Pensacola, Florida, which is just 25 miles from the Alabama border, later this week.

I covered the basic indisputable proofs of Roy Moore being a pedophile here:

From Being Pro-Child Rape To Stealing A Conspiracy Site's Explanation For His Yearbook Signing... All Evidence Points To Roy Moore Being A Pedophile

Now, there is new evidence proving Roy Moore is lying;

A woman Roy Moore dated when she was 17 confirms he's lying about his signature on the yearbook and that he wasn't dating 17 year olds because in Alabama that's not underage (neither is 16);

Note: The forgery conspiracy theory that Roy Moore copied WELL after it came out relies on an easily debunkable theory, explained here.