Trump Lied About Being President Of The People, Not Cutting Medicare, Not Cutting Social Security, Increasing Funding For Veterans With PTSD And Even Reducing The Debt! Trump Can't Be Trusted As A Man Of His Word. He's Not Even An American, Except In Name.

Background: Trump Is A Pathological Liar

Everything Trump said he stood for turned out to be a lie. Trump is a President who stands against the people and everything this country stands for.

Has Trump kept his promises? Chris and the panel take a look at Trump's promises to see if he's lived up to campaign pledges. Duration: 7:50


Trump said he was President of the people when all his attacks - just on the NFL - proves he isn't; 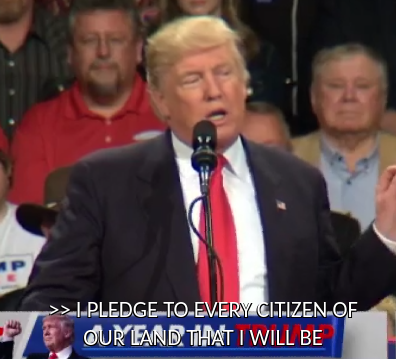 Clearly Trump doesn't stand for the people on Medicare, Social Security and children on food stamps etc. (i.e. the not-rich Americans), who he has clearly consigned to death;

Broken Promise #1: Trump vowed not to cut Medicaid
Trump’s budget would cut Medicaid by a lot, despite the president telling the Daily Signal days before launching his White House bid, “I’m not going to cut Social Security like every other Republican and I’m not going to cut Medicare or Medicaid.”
The administration proposes reducing spending on Medicaid programs by more than $600 billion over the next decade, a massive cut that appears to go on top of $839 billion in Medicaid cuts included in the House health care bill Trump is supporting.
Mulvaney insists that the proposed reduction in spending isn't a cut — it's simply growing less than the nonpartisan Congressional Budget Office expects the needs of the program to be.
"There are no Medicaid cuts in terms of what normal human beings would call cuts, we are not spending less money than we did the year before," Mulvaney said.
Broken Promise #2: Trump said he wouldn't cut Social Security
Trump's budget proposes slashing the Social Security Disability Insurance (SSDI), a $31.4 billion change to the program that pays monthly benefits to over 10 million disabled individuals under the retirement age.
Mulvaney argued that SSDI isn't “what most people would consider to be Social Security” and said he would "hope" less people receive the program once they remove individuals who "should not" be getting it. It's unclear how the administration determined there is that much fraud in the system.
Broken Promise #3: Trump said he'd fully fund the border wall
The president promised to fully fund a border wall, with plans to make Mexico pay for it later, in his "Contract With the American Voter." The president’s budget would allocate $2.6 billion for planning, designing, and constructing the border wall and its surrounding securities, but Republican leaders estimate the wall could cost as much as $15 billion.
"While we did not get as much money as we wanted for 2017 omnibus we did get a lot," Mulvaney said. "We are going to continue to press on."
Broken Promise #4: Trump promised to cancel all federal funding to sanctuary cities
This is another contract promise. Trump’s administration has tried to restrict funding to so-called “sanctuary” cities — jurisdiction that don’t enforce federal immigration priorities and cooperate fully with federal authorities — but their efforts were halted by the courts.
This budget doesn't include any kind of limit on federal funding, and Attorney General Jeff Sessions narrowed the scope of Trump's executive order on the issue in a memo Monday.
Broken Promise #5: Trump said he would increase funding for treatment of PTSD
Trump’s budget would increase funding for the Department of Veterans Affairs, but the budget proposal doesn't appear to focus money on PTSD or mental health issues.
It would, however, slash $3.2 billion from the “individual unemployability” benefit, which the budget says will be "modernized." The program allows the VA to more fully compensate disabled veterans, including those with PTSD, whose disability renders them unemployable.
Broken Promise #6: Trump told police union leaders he’d find more funding for training
Trump promised resources for training in his voter contract, as well. This budget aims to increase funding for more border agents and immigration judges, increased immigrant detentions, and fighting the opioid crisis, but it does not earmark additional funds for training police.
Broken Promise #7: Trump promised to bring down the debt "fairly quickly"


Barring the kind of hyperbolic growth Trump has promised and economists have disputed, Trump's budget would do little to combat the national debt. Rather, it would potentially increase it.

Note: I thought this was an especially important staement as it indicates he has no idea what America is all about or what being an American means.

Trump fails to keep proper distance from Justice Department Former Attorney General Eric Holder talks with Rachel Maddow about the necessity of a wall between the Department of Justice and the president and the risk Donald Trump takes by ignoring that particular tenet of American government. Duration: 6:03


Basically Trump is a "president" who has no idea what democracy or being American is all about. He came in expecting to be a dictator and to this day he complains of not getting his way like a dictator. He's not an American in any shape, way or form EXCEPT by an accident of birth. He would be more at home as Putin or another Russian Oligarch than an American President.

Related: The White House is engaged in a coordinated attack on James Comey that Hannity and Trump's lawyer have been pushing for months

Related: Trump Wants To Be A Dictator & The GOP Likes Dictators. They Couldn't Be A More Perfect Match for Each Other... Especially Now That They Are OFFICIALLY The Party Of The Pedophile

Is Trump really a 'big loser' under tax plan? Erin Burnett Out Front President Donald Trump has said that his tax plan will raise his own taxes. CNN's Erin Burnett looks at what we know--and don't know--about Trump's taxes.


Donald Trump says something that isn't true 5.5 times a day. Every day.

Washington (CNN)Alternative facts. Lies. Distortions. Exaggerations. Misstatements. Half truths.
Call it what you want, but there's one indisputable fact: Donald Trump does a stunning amount of it.
According to a count maintained by The Washington Post's Fact Checker and updated Tuesday morning, Trump has now made 1,628 false or misleading claims in his 298 days in office. That's an average of 5.5 a day. Five and a half misleading or outright false statements for each day -- including weekends! -- that Trump has been president.
By the Fact-Checker's estimates, Trump -- if he keeps up his current pace -- will blow past 2,000 misstatements and/or untruths in his first year in office.

Moment Of Zen On Trump's Hypocrisy

ALL THE CLINTON CRIMES THE TRUMPS HAVE COMMITTED 9/26/2017 After officials in the Trump administration are accused of using personal email accounts, Trevor notices that many White House scandals are similar to Hillary Clinton's.