Trump & The GOP's War On Children And The Poor ... And The Sort Of Cons They Are Pulling (With Comedians Stephen Colbert & Jon Stewart)

Flashback: Stephen Colbert: The GOP-Republicans Are Planning A Quite Attack On The Economy That Would Kill 3 Million Jobs And Cost 1.5 Trillion In Lost Economic Revenue.

Stephen Has An Unpopular Opinion On Trump's Budget
Stephen stance on the White House's proposed slashing of the food stamp program and children's health insurance program is somehow radical in 2017. 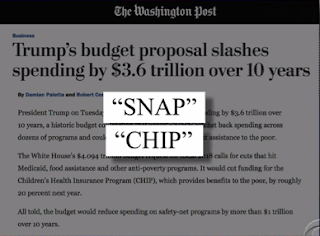 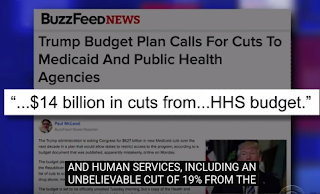 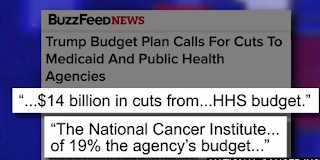 The bill passed despite the fact it didn't qualify as something that improved upon the Affordable Care Act ("Obamacare") as Trump had promised...

Jon Stewart explains the sort of tactics (Cons) the GOP used in the past to pass such awful bills...

Daily Show: WORLD OF CLASS WARFARE - THE POOR'S FREE RIDE IS OVER 8/18/2011 The government could raise $700 billion by either taking half of everything earned by the bottom 50% or by raising the marginal tax rate on the top two percent.

Notice: Fox-News/GOP talk of percentages for the minority group they protect but numerical figures with examples of piles of money when attacking majority interests.


Daily Show: WORLD OF CLASS WARFARE - WARREN BUFFETT VS. WEALTHY CONSERVATIVES 8/18/2011Warren Buffett's op-ed is a thoughtful treatise on the advantages the super-wealthy currently enjoy at the hands of the tax code, or to put it another way, "class warfare."

A. "We gotta start somewhere... that's a million dollars (that we could save)" - in contrast to the 700 billion we could save to reduce the deficit from the rich and unfairly untaxed (i.e. there is class warfare but its from the ones who are trying to aggravate people by projecting what they are doing onto Buffet).

[The answer is YES, we can start somewhere, such as the solution below or by making the taxes proportionate between rich and poor. For example 20% from a poor person could lead to struggling to survive while 20% from someone with a billion dollars can't possibly leave them struggling to survive. Of course, 20% from a rich person WILL be more money than 20% from the poor person. Be conscious of which modes of measurement the GOP/Fox-News is using to understand where they are trying to fool you - when they aren't throwing you a bone to seem nice!]

B . From fox news: Dont tax the rich but 'broaden the tax base' - ignore/cover over the realty of the tax codes.

C. Taxing the majority (poor) instead of taxing the minority (super rich by comparison) this is the very definition of despotism.

D. Heritage institute (Koch Brother funded) are trying to create the image of poor being wealthy cause they have normal second world amenities. (i.e. this will lower standard of living).

Broken Promise #3: Trump said he'd fully fund the border wall The president promised to fully fund a border wall, with plans to make Mexico pay for it later, in his "Contract With the American Voter." The president's budget would allocate $2.6 billion for planning, designing, and constructing the border wall and its surrounding securities, but Republican leaders estimate the wall could cost as much as $15 billion.

Broken Promise #4: Trump promised to cancel all federal funding to sanctuary cities This is another contract promise. Trump's administration has tried to restrict funding to so-called "sanctuary" cities — jurisdiction that don't enforce federal immigration priorities and cooperate fully with federal authorities — but their efforts were halted by the courts.

Broken Promise #5: Trump said he would increase funding for treatment of PTSD Trump's budget would increase funding for the Department of Veterans Affairs, but the budget proposal doesn't appear to focus money on PTSD or mental health issues. It would, however, slash $3.2 billion from the "individual unemployability" benefit, which the budget says will be "modernized." The program allows the VA to more fully compensate disabled veterans, including those with PTSD, whose disability renders them unemployable.

Broken Promise #7: Trump promised to bring down the debt "fairly quickly" Barring the kind of hyperbolic growth Trump has promised and economists have disputed, Trump's budget would do little to combat the national debt. Rather, it would potentially increase it.


MSNBC: Sanders: CBO score on AHCA 'disaster' for Republicans The senator from Vermont responds to the news that the Republican health care plan would result in 23 million less Americans having health insurance, according to CBO analysis. Duration: 6:26


MSNBC: On entitlements, Trump arrives at his ‘Read My Lips’ moment


Nearly three decades later, Donald Trump is in the White House, and with the unveiling of his new budget, another Republican president has arrived at a “read-my-lips” moment of his own.
As a candidate, Trump took care to separate himself from the GOP field and his party’s orthodoxy by making a promise other Republicans wouldn’t consider and didn’t believe:

In his campaign kick-off speech, Trump said he’d make no cuts to Medicare, Medicaid, or Social Security. He bragged about the vow via Twitter, over and over and over again.

MSNBC: CBO: By 2026, 23 Million Fewer People Will Have Insurance Sen. James Lankford responds to the newly released CBO report about the GOP health care bill and the upcoming Senate debate on the future of health care. Duration: 4:18

Stephen Colbert Warns Us That Now Republicans Will Do What They Have Always Done... Gobble Up Our Constitutional Rights!