Tom Coburn suddenly quit and James Lankford took his place. Given Tom Coburn's personal little war on veterans, I often wondered what else he may have been up to. This post looks at an interesting possibility that came up in my research.

Notice that James Lankford DOES vote to stop insider trading BUT doesn't seek to find out what happened and what sort of stealing was going on... also notice how Tom Coburn voted...

Daily Show: The government investigates trading on non-public information -- unless members of Congress are doing it!

STOCKBLOCKERS - POLITICAL INTELLIGENCE 2/15/2012 A whole industry of parasites rides on the backs of Congresspeople, gathering non-public information and selling it to hedge funds.


AMERICA'S NEXT TARP MODEL 12/1/2011 A Bloomberg report reveals that the U.S. government loaned banks $7.7 trillion in secret bailout funds at no interest and then borrowed the money back at interest.

Basically the banks were being lent money at no interest (by the government) and then the government was borrowing it back and giving interest!'

Congress decided to cancel its rights to do insider trading but also decided NOT to look into any past indiscretions before this law was passed...

Insider House Rules: When it comes to reforming the Congressional exemption from insider trading rules, lawmakers get a gentleman's F minus...


The Daily Show with Jon Stewart
Get More: Daily Show Full Episodes,Indecision Political Humor,The Daily Show on Facebook
Faced with the grim prospect of being held financially accountable, lawmakers come together and cripple a bill aimed at more transparent government...

The Bill called for the ending of all insider trading (from now on!). Now, notice of the two votes in the Senate who voted no...

James Lankford voted Yea (Passage With Amendment) on this Legislation.

Clearly, even in a twitter fought election, I would have creamed Tom Coburn on this issue (he quit well after my first post on the matter).

Note On The Speaker Of The House Paul Ryan; 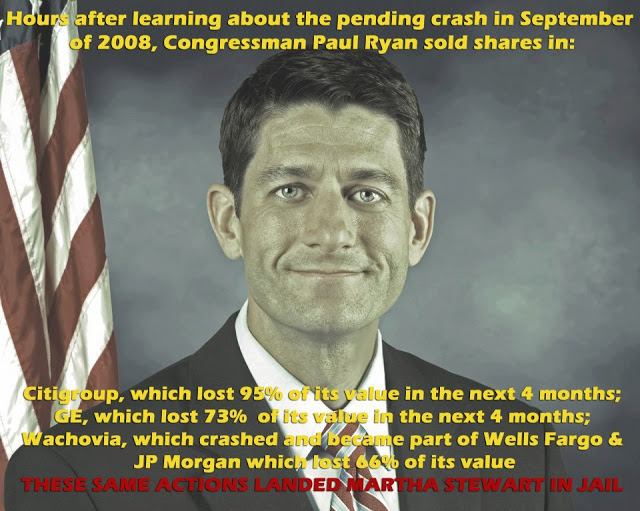 
The Guardian: Paul Ryan sold shares on same day as private briefing of banking crisis: Vice-presidential candidate denies he profited from a 2008 meeting with Fed chairman in which officials outlined fears for financial crisis

Alternet: The Paul Ryan Insider Trading Story Won’t Die Because It’s Legitimate: Congressman Ryan's stock trades deserve the closest scrutiny. So why is he getting a pass from the media?


Clearly a crime happened here and the GOP covered it up to help its own and James Lankford was involved.