5. Indicting Fox News For Obstruction Of Justice
6. The Case For Impeaching Trump For Foreign Financial Ties, Nepotism & Making Money Off The Presidency Using A "Trust" In His Name

The Trump-Russia Collusion Is Bad Enough To Need No More Evidence To Impeach Trump (Democrats: Let The Investigation Go On While You Impeach Him for Treason)

The real problem with impeaching Trump and his cohorts seems to be the Democrats themselves. There is enough evidence on the emollients clause to begin bringing impeachment bills to the floor even if they get blocked by the GOP. The GOP never give up, yes they are traitors and they never give up on attacking America & the Constitution AND the Democrats should copy their actions... its JUST their REASONS for their actions are wrong, the actions themselves are right if we have a traitor or a traitorous party in power. If Democrats weren't cowards then they would pursue the GOP traitors like the GOP pursue the innocent. The GOP attempted to repeal "Obama Care" dozens of times. The Democrats should be pushing bills to impeach Trump and his cohorts EVERY WEEK. If the GOP have no fear pursuing treason why do the Democrats fear pursuing truth? Like I explained before, America is definitely falling (or has already fallen and reached the stage where a hero or a few heroes attempt to prop up before its final fall, as Arnold Toynbee explained). Anyways, here is a summary of the case to impeach Trump that would be more than enough to impeach the President if the GOP had this much ammunition.

Trump’s praise of Vladimir Putin—grounded in an affection that long predates his political career—was public, as was his gleeful exploitation of the fruits of hacks against his opponents and encouragement of more of the same, as was his attempt to exculpate Russia long after the intelligence community had reached consensus about their responsibility, as was his use on the campaign trail of stories pushed out by Russian state media.
Trump could see they were helping him, they could see he appreciated it and was reciprocating. What, exactly, would have been the marginal benefit of some further secret communication making this happy symbiosis a matter of explicit agreement? Collusion would have been redundant.
One benefit might be apprising the Trump campaign about what to expect, or inquiring as to what forms of assistance would be most useful. But none of that requires the kind of explicit confirmation of a state-sponsored information operation that people have in mind when they talk about “knowing collusion.”
All of that could be accomplished via cutouts that preserve plausible deniability. So, for instance, Trump confidant Roger Stone appeared to have advance knowledge of forthcoming Wikileaks dumps of hacked Democratic e-mails, and acknowledged communications with both Julian Assange and the “Guccifer 2.0” hacker persona, now widely regarded as a front for Russian intelligence.

We know that Russia was seeking to have JUST this sort of influence...

Report: Russians hoped to use Trump aides for influence The New York Times reports Trump's campaign aides were the target of a Russian influence operation during the 2016 election. Plus, the House Intel Committee is getting ready to subpoena Michael Flynn. Ari Melber speaks with Joy Reid, David Frum, and Malcolm Nance. Duration: 14:52


We also know that, as per GOP tradition, leaders of the GOP were told about possible treason and they did nothing...

NPR: In his opening statement, Brennan also recounted how he had briefed congressional leaders in August of last year, including House Speaker Paul Ryan, R-Wisc., Senate Majority Leader Mitch McConnell, R-Ky., and the chairs and ranking members of the House and Senate Intelligence Committees about the "full details" of what he knew of Russia's interference in the 2016 election. Brennan said he became convinced last summer that Russia was trying to interfere in the campaign, saying "they were very aggressive." Brennan said he is "aware of information and intelligence that revealed contacts and interactions between Russian officials and U.S. persons involved in the Trump campaign." Brennan said that concerned him, "because of known Russian efforts to suborn such individuals," and that it raised questions about whether or not the Russians "were able to gain the cooperation of those individuals." Brennan added he didn't know if "collusion existed" between the Russians and those he identified as involved in the Trump campaign.

This is normal for GOP where power is concerned (they believe they should wield it like Savage Dictators)...

Paul Ryan calls on Gianforte to apologize Dems hope to capitalize after Gianforte body-slams reporter House Speaker Paul Ryan said Thursday that Greg Gianforte, the GOP House candidate charged with assaulting a reporter, should apologize but added that it is now up to voters in Montana to choose whether they want him as their representative in Congress.

Other accomplices for Obstruction Of Justice:

Sessions failed to disclose Russian meetings on security forms Rachel Maddow reports the latest in a string of failures by Donald Trump staffers failing to disclose meetings with Russians, in this case Jeff Sessions leaving off his meetings from his security clearance form. Duration: 1:50

Report: Subject of FBI probe kept advising Trump team on Russia Paul Manafort was in contact with Trump's team months after he resigned from the Trump campaign and months after the FBI's Russia investigation began, according to a new POLITICO report. POLITICO's Ken Vogel and Mother Jones' David Corn join Joy Reid. Duration: 7:24

The Case For Obstruction Of Justice Thus Far...

Exclusive: Misunderstanding at root of Comey resources question? Rachel Maddow looks at contradictions in the story of James Comey asking for more resources for the Trump-Russia investigation and notes the importance of a correct understanding of the issue in the context of any aspects of the investigation that include obstruction. Duration: 14:31 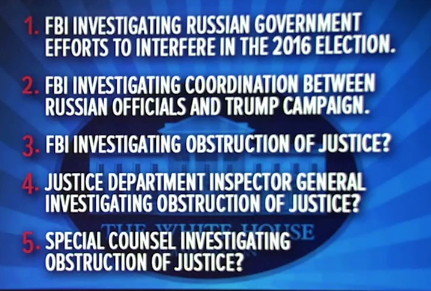 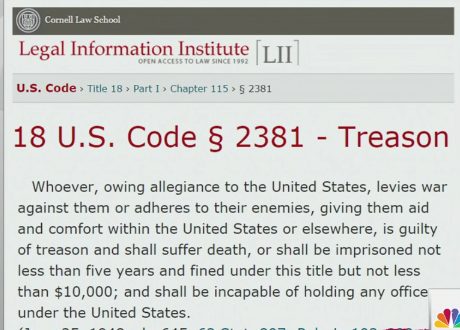 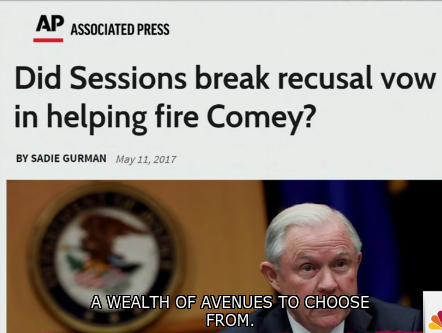 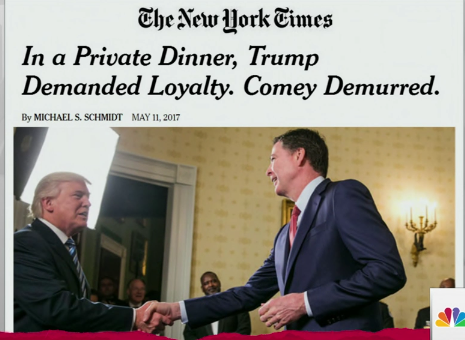 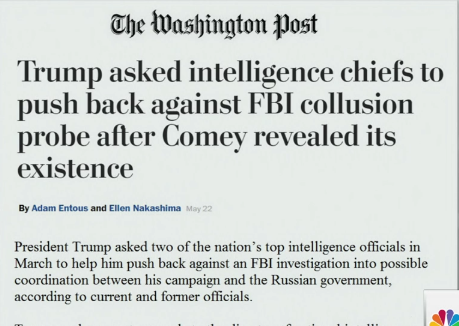 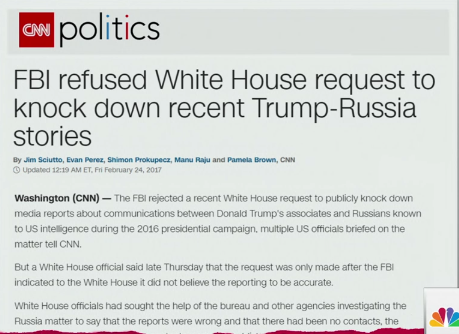 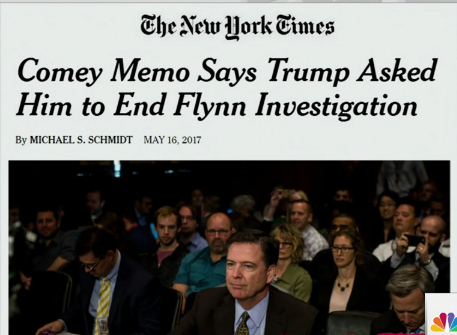 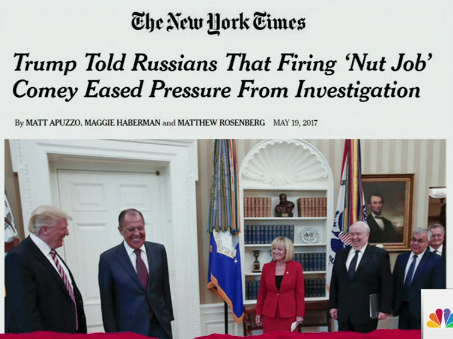 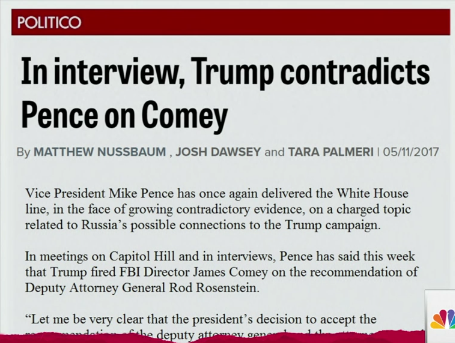 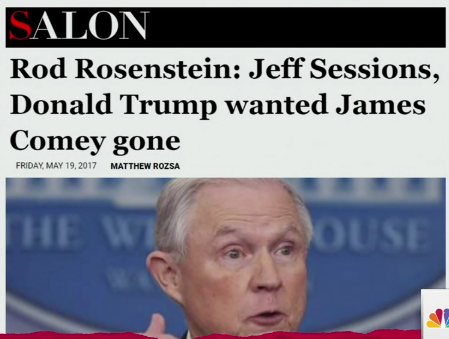 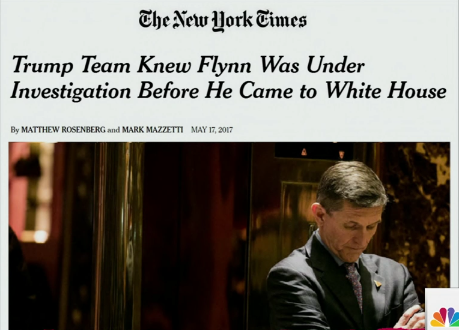 The only item we don't have as proof to impeach Trump for Obstruction of Justice is this one (one out of many and thus irrelevant to stop the case for impeachment anyways); 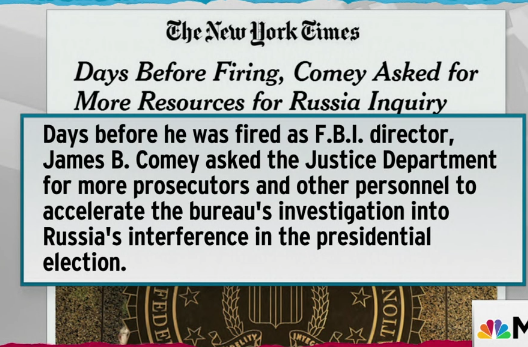 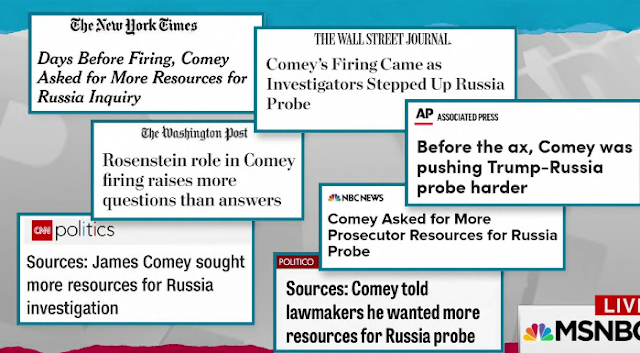 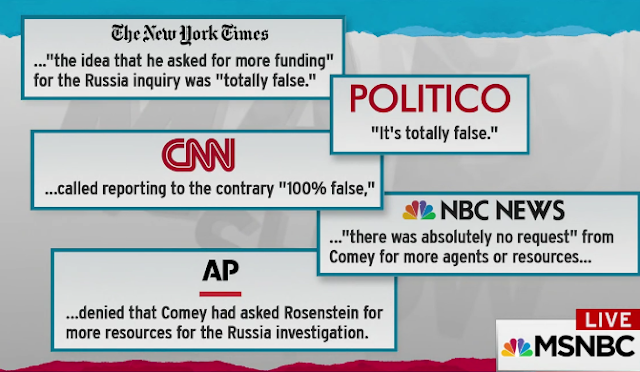 Kusher sought Kremlin back channel via Russian ambassador: reportAdam Entous, national security reporter for The Washington Post, discusses the new revelation that Donald Trump adviser and son-in-law Jared Kushner asked the Russian ambassador to set up a back channel to the Kremlin using Russian facilities. Duration: 15:57 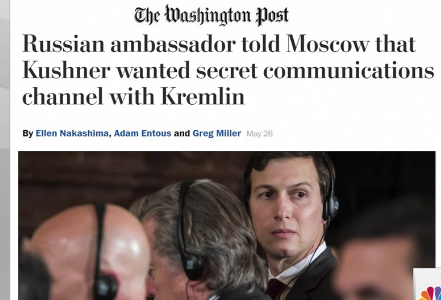 Fmr. CIA Dir. on Kushner Russia news: 'Is this a prank?' Former acting CIA Director John McLaughlin joins Lawrence O'Donnell to share the intelligence community's reaction to reports Jared Kushner discussed a secret communications channel with the Russians. He says if a U.S. intel officer did this, it would be espionage. Duration: 5:27

Clearly, Trump and his administration HAS a reason for their Obstruction OF Justice. The impeachment proceedings should start.